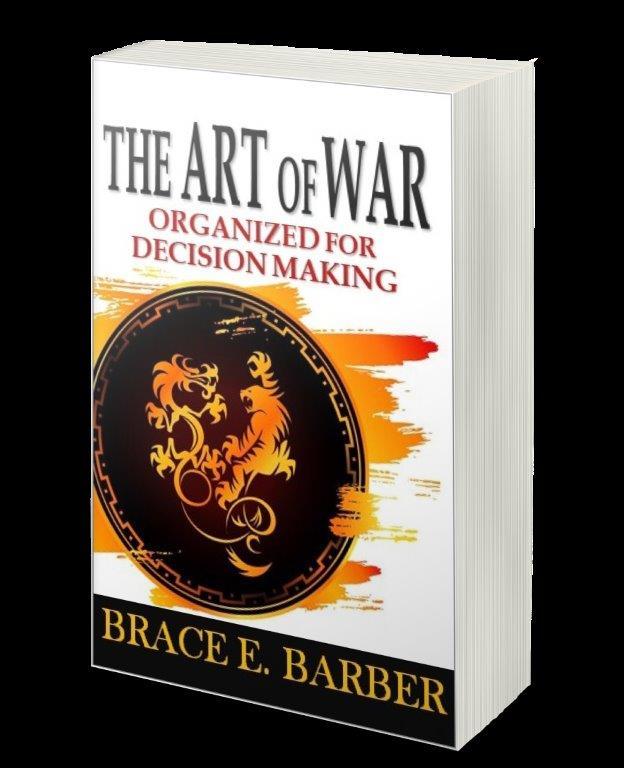 The Art of War, Organized for Decision Making

Brace E. Barber completed a major reorganization of The Art of War principles based on the modern military strategy planning format. The new work is titled The Art of War, Organized for Decision Making. (https://amzn.to/3cscji5) Mr. Barber insists that, "this is not an insult to the original manuscript, but rather it is an intelligent and practical reorganization that allows the user to draw the full value out of Sun Tzu's guidance." While at West Point, Mr. Barber started to read The Art of War but quickly put it down as a useless list of proverbs without context. At the age of 40, after some life experience, he picked it up again with a much different response. Mr. Barber had already spent 11 years active duty in the Army and had significant amount of training and experience in the military planning process. The military uses an organized planning format developed and refined over the course of decades. The format allows people to see a vast amount of dynamic information in a very organized way in order to foster effective strategy development and decisions. This planning format is used in every Army operation. Mr. Barber is an expert in the use and training of the military's planning process. The Art of War is the most popular strategy book in the world. The book consistently ranks near the top of Amazon sales. As of this writing it is at #118 in Audible books. The teaching is used by business and military leaders to find the proper path to a competitive advantage. The ancient nature of the work and wide distribution of the book has added to an impression of efficacy. Mr. Barber saw that with some reorganization, The Art of War fit into a military planning format.Mr. Barber says, "The Art of War can help a person create an effective strategy, but not with its original organization. People buy the book and quickly discard it as they experience the difficulty of understanding how to apply the teaching." Mr. Barber claims that he has fixed that problem by marrying Sun Tzu's principles with the military planning format.Brace E. Barber 1507 Thompson Station Rd W Thompsons Station, TN 37179Brace E. Barber is the author of three books, The Art of War, Organized for Decision Making, Ranger School, No Excuse Leadership,(https://www.RangerSchool.com) and TESTED: A New Strategy for Keeping Kids in the Faith. (https://amzn.to/3cuLJ8i) He is a graduate of West Point and of the U.S. Army's Airborne and Ranger Schools. He served as a combat arms officer in the Army for 11 years, leading three platoons and two companies. After leaving the Army, Brace co-founded two companies and purchased a third.