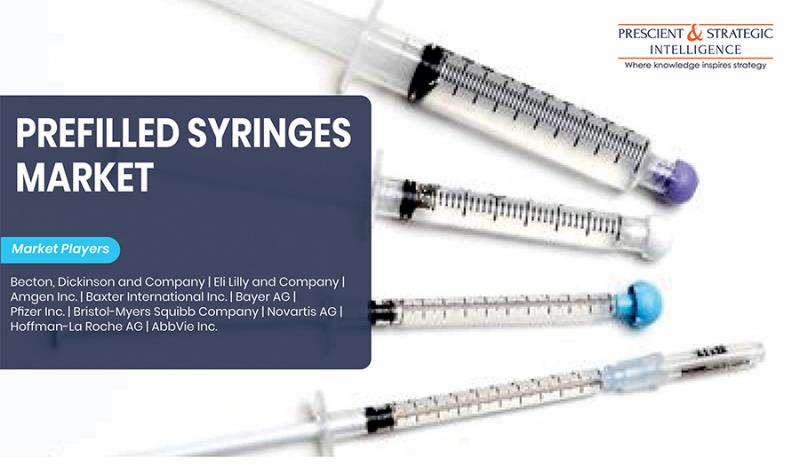 In 2017, the global prefilled syringes market reached $4.7 billion and is projected to register an 8.3% CAGR during the forecast period (2018-2023). The market is growing because of the extensive pipeline of injectable drugs, rising demand for injectable pharmaceutical products, expanding pharmaceutical industry, increasing prevalence of chronic and lifestyle associated diseases, surging requirement for point-of-care administration, benefits of prefilled syringes over conventional vial and syringe packaging systems, regulations associated with needlestick injuries, and technological advancements. A single dose of disposable syringe containing parenteral drug filled by the manufacturers is called prefilled syringe. Receive a Free Sample Copy of this Report: https://www.psmarketresearch.com/market-analysis/prefilled-syringes-market/report-sampleWhen material is taken into consideration, the prefilled syringes market is divided into plastic and glass. Between these two, the glass syringes dominated the market during the historical period (2013-2017) and are further predicted to account for the major share of the market during the forecast period. The plastic syringes are projected to grow at the faster CAGR of 9.0% during the forecast period due to the introduction of innovative polymers, including crystal-clear polymer and polypropylene, which are biocompatible with other components of the prefilled syringes. Make an Enquiry before Purchase: https://www.psmarketresearch.com/send-enquiry?enquiry-url=prefilled-syringes-marketThe surging prevalence of chronic and lifestyle associated diseases is among the primary driving factors of the prefilled syringes market. The prevalence of diseases including cancer, cardiovascular diseases, diabetes, and respiratory diseases is increasing because of lack of access to preventive care and changing lifestyle, particularly in developing countries. Attributed to this surging patient base, the manufacturers are increasingly focusing on the development of several types of prefilled syringes with varied doses and drug composition for the treatment of these diseases, which is resulting in the growth of the market. Report Description: https://www.psmarketresearch.com/market-analysis/prefilled-syringes-market A key trend being witnessed in the prefilled syringes market is the growing adoption of customized prefilled syringes. Injectable formulations require stringent quality control for meeting the requirements of customers. The manufacturers have started focusing on the development of prefilled syringes which can be utilized by individuals on their own. The focus of manufacturers is thus shifting from syringes utilized by hospitals or other healthcare providers to self-administration dose syringes. These syringes are customized, and thus are designed according to the medication and dosage needed by the patient.Hence, the market is registering growth due to the benefits of prefilled syringes over conventional syringes and increasing prevalence of chronic and lifestyle associated diseases.About P&S Intelligence P&S Intelligence is a provider of market research and consulting services catering to the market information needs of burgeoning industries across the world. Providing the plinth of market intelligence, P&S as an enterprising research and consulting company, believes in providing thorough landscape analyses on the ever-changing market scenario, to empower companies to make informed decisions and base their business strategies with astuteness.Contact: P&S Intelligence Toll-free: +1-888-778-7886 (USA/Canada) International: +1-347-960-6455 Email: enquiry@psmarketresearch.com Web: https://www.psmarketresearch.com

12-24-2021 | Advertising, Media Consulting, …
P&S Intelligence
AR and VR Market Drivers, Restraints, Opportunities, and Trends in Coming Years
The augmented reality (AR) and virtual reality (VR) market is expected to witness a strong CAGR, of 42.9%, during the forecast period (2020–2030), owing to the soaring focus of vendors on price reduction, growing penetration of tablet computers and smartphones, and surging adoption of AR and VR technologies in the healthcare, gaming, tourism, education, and entertainment industries. According to P&S Intelligence, the market was valued at $37.0 billion in 2019
12-24-2021 | Advertising, Media Consulting, …
P&S Intelligence
RF Transceiver Market Drivers, Restraints, Opportunities, and Trends in Coming Y …
The major factors responsible for the growth of the radiofrequency (RF) transceiver market are the increasing demand for smartphones and rising penetration of the internet of things (IoT) technology. Due to this, the revenue generated by the market players, which stood at $3,892.1 million in 2019, is projected to grow at a 0.8% CAGR during 2020–2030 (forecast period), to reach $3,384.5 million by 2030. The RF transceiver is an important
12-24-2021 | Advertising, Media Consulting, …
P&S Intelligence
HVAC Market Drivers, Restraints, Opportunities, and Trends in Coming Years
Factors such as the growing construction sector, increasing government initiatives to support the installation of heating, ventilation, and air conditioning (HVAC) systems, surging demand for energy-efficient systems, and rising global surface temperature are expected to drive the growth of the HVAC market at a 4.8% CAGR during the forecast period (2020–2030). With this growth rate, the market size will increase from $240.8 billion in 2019 to $358.1 billion by 2030. Get
12-23-2021 | Advertising, Media Consulting, …
P&S Intelligence
U.A.E HVAC Market Recent Trends, Developments, Challenges and Opportunities
A surge in construction activities in the transportation sector of the U.A.E. has led to the widescale adoption of heating, air conditioning, and ventilating (HVAC) systems in the country. The gulf country is spending hefty amounts on the construction of airports and expansion of railway infrastructure. These new facilities adopt HVAC equipment to offer better amenities. For example, the U.A.E. government launched "Route 2020" in 2018, to extend the Red