The Cannibal Holocaust saga continues with a videogame 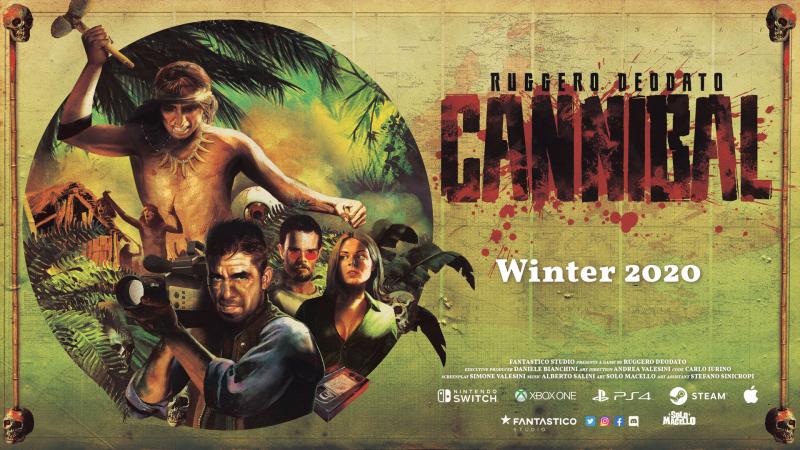 On the fortieth anniversary of the release of the cult film "Cannibal Holocaust", director Ruggero Deodato announces the fourth, highly awaited chapter of his cannibals cycle, with great news: the new episode will not be a movie, but a videogame created in collaboration with Fantastico StudioOn February 7, 1980, Cannibal Holocaust, the second film in Ruggero Deodato's trilogy dedicated to his cannibals saga, was released in Italy. The film immediately generated controversy and harsh criticism due to an excessive realism for the time, which induced public and critics to consider the work an authentic "snuff movie". In a short time, however, it was re-evaluated and considered a masterpiece, destined to influence the cinematographic language of the years to come. Universally recognized as an anticipator of the "found footage" genre - the fake documentary -, made famous more than a decade later by films such as the Blair Witch Project, Paranormal Activity and Cloverfield; beloved by Quentin Tarantino, who considers it one of the best genre Italian movie, and by Eli Roth, who considers Deodato an authentic mentor and wanted him for a cameo in the second chapter of "Hostel". "Experimenting is one of the things that I consider most fundamental in this field. What really interests me is to test myself, try something new, "says the Director, who continues:" maybe that's also why I waited so long to return to the world of the jungle and cannibals. At the time we went to the jungle, lived with the natives, showed the public a reality that they could never have personally experienced and understood. Today, instead there are dozens of documentaries and films that show life and nature of those places, and for me the theme had lost its appeal. Meeting the Fantastico Studio guys offered me the opportunity to return to those atmospheres, to those themes, but trying something new: contaminating my world with the video games language is a new challenge, making the story interactive opens up many new possibilities and I hope it will also help to bring young people closer to my narrative universe ". The themes are the ones that made the saga popular: natives' lives, told in its rawness, and cannibalism, powerful metaphors that reveal the most disturbing and deep impulses in our society. However, the formula changes: Cannibal is an interactive horror graphic adventure made with Unity, with the direction and script of Ruggero Deodato, the original drawings of Solo Macello, in which the player will take control of different characters, to reveal, little by little, the background that led them to a desperate expedition to the virgin jungles of Borneo. And of course, get to discover the end of the story, destined to shake from the foundations every certainty acquired during the game. Cannibal will be available from November 2020 for Nintendo Switch, PS4, Xbox One, PC and mobile.Teaser https://www.youtube.com/watch?v=lHjW-n4P3zk&feature=emb_logoRuggero Deodato: Ruggero Deodato is an Italian film director, and has also performed as both a screenwriter, and more recently an actor in both his own and other projects. His career has spanned a wide-range of genres including, peplum, comedy, drama, poliziottesco and science fiction, yet he is perhaps best known for directing violent and gory horror films with strong elements of realism. His most notable film is Cannibal Holocaust, considered one of the most controversial and brutal in the history of cinema, which was seized, banned or heavily censored in many countries. It is also cited as a precursor of found footage films such as The Blair Witch Project and The Last Broadcast. The film strengthened Deodato's fame as an "extreme" director and earned him the nickname "Monsieur Cannibal" in France. Deodato has been an influence on film directors like Oliver Stone, Quentin Tarantino and Eli Roth.Fantastico Studio srl Via Luigi Luiggi 11, 00154 Roma ItaliaDaniele Bianchini info@fantasticostudio.itFantastico Studio starts its activity in Rome in 2017 from an idea of Daniele Bianchini, Andrea Valesini and Carlo Iurino. After years of experience in the videogames field as freelancers, these guys have well thought to evoke to themselves the burden and honor of organizing an independent studio of creators who, as in the best craft shops, would develop videogame projects dealing with all phases of game production; from the idea, the writing of the code and the graphics/sound design to the distribution and communication of the same. In less than 3 years Fantastico Studio has distinguished itself for the style of its products by publishing videogames for console, pc and mobile of discreet success like Black Paradox, Hero Express, Rainbow toilets & unicorns. In 2019 it successfully completed a "Kickstarter" campaign obtaining funding for the development of Landflix Odyssey, a highly awaited game-parody of the best Netflix TV series. Recently, thanks to the experience gained with its first projects, Fantastico Studio has also proposed itself as of indie videogames publisher, by signing interesting licenses with national and international developers.