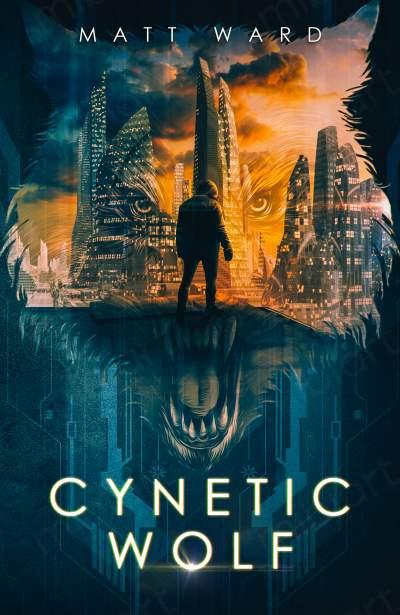 The Release of Sci-Fi Dystopian Thriller Set After a Genetic Plague 45x Worse than COVID-19Half-human hybrids enslaved by an immortal cyborg governmentAtlanta, GA, March 25th, 2020. EMBARGOED UNTIL MARCH 26th, 2020.Myrmani Press launches a new post-plague, science fiction technothriller in Matt Ward's debut novel, Cynetic Wolf. If you thought Coronavirus was bad, imagine a 45x more virulent, manmade virus as humanity's arrogance over genetic engineering split mankind into four unequal subspecies.As a top-ranked futurist and science communicator, Ward's book couldn't come at a more pressing time as pandemic fears spread and the world collapses inward in a survival of forced seclusion.Jacqui Castle, best selling dystopian author of The Seclusion says, "...a dystopian thrill ride that ratchets up the action with each page and begs the question - who can claim humanity?"SHORT BLURB: Life sucked until cyborgs murdered his sister. Then things got worse: government hit squads, cybernetic powers, secrets better left unsaid. Raek's your average sixteen-year-old wolfish: claws, keen eyes, no future, and a nose for trouble... There's just one thing: he's got built-in blasters and is a threat to the immortal world government and its rigid caste system which enslaves his fellow hybrids. And that's why the Resistance wants him, and the cyborgs want him dead.Cynetic Wolf is available for purchase on Amazon and can be found at https://mattwardwrites.com/dystopia which redirects to the buyer's local Amazon store.High resolution book cover images available here.ABOUT THE AUTHOR: Matt Ward is an author, entrepreneur, host of the Disruptors.FM tech podcast, and a top-rated futurist worldwide. His work (which has been featured in the likes of Inc., VentureBeat, and Futurist Mag) focuses on the intersection of exponential technologies and the ethical issues confronting humanity in the 21st century, as do his novels.More details about Matt and the book may be found at https://mattwardwrites.com.Grab the book today at https://mattwardwrites.com/dystopiaCONTACT INFO: Matt Ward 33 Prestwick Court Peachtree City, GA 30269 678-763-9416 matt@mattwardwrites.com https://mattwardwrites.com###LONGER BLURB:It's 2096, sixty years after ninety percent died from a man-made Bioplague. Humanity has splintered into four unequal subspecies: immortals, cyborgs, enhancers, and subservient half-human, half-animal hybrids. The world is anything but equal. Hybrids everywhere are suffering, but sixteen-year-old Raek Mekorian, a wolfish with a nose for trouble, doesn't see an alternative. Except the Resistance, who don't stand a chance against the world government. His mom always said, "Keep your head down."And he does, until his sister is murdered by a pair of cyborgs. Overnight, his simple life is shattered, fracturing the rigid governmental caste as he is thrust into the dangerous world of superhuman hit squads, Resistance uprisings, and secrets better left unsaid.With only built-in blasters and the advice of a mysterious professor, Raek must navigate crushing betrayal, self-doubt, and a limitless enemy whose evil knows no bounds.The fate of mankind may rest in his hands.300 Viewpoint Drive Peachtree City, GA 30269 USAABOUT THE AUTHOR Matt Ward is an author, entrepreneur, host the Disruptors.FM tech podcast and the #24 ranked futurist worldwide. His work focuses on the intersection of exponential technologies and the ethical issues confronting humanity in the 21st century, as do his novels, which are inspired by the cutting-edge scientists he interviews on his show. Today, Matt writes fast-paced science fiction, fantasy and speculative fiction technothrillers with a dystopian bent on the question: what does it mean to be human?You can find Matt online at mattwardwrites.com. Or, you can connect with Matt on Twitter: @mattwardwrites, on Facebook: facebook.com/MattWardBooks, or Instagram: @mattwardwrites, or email him at matt@mattwardwrites.com if you'd like to say hi.

10-23-2012 | Leisure, Entertainment, Miscel …
Torpedo Booking Agency
The Voice of Germany: Matt Voodoo - Statement
I don't own a smartphone & was focusing my attention on the road over the weekend, so I've unfortunately not been able to make a proper statement until now. I've only this morning finally had the opportunity to look over all the press & comments. It's become clear to me that a couple things need to be set straight. I'd like everyone to know that I had already decided & informed
09-30-2011 | Arts & Culture
The Boston Beehive
The Beehive Presents Matt Garrison
WHAT: On Thursday, October 6th, 2011, Matt Garrison, a virtuoso bass guitar player from New York State, will be returning to his college town for a special performance on The Beehive’s stage as a part of the ‘Beehive Brooklyn Series.’ Starting at 10:00PM-2:00AM, the audience will have the opportunity to see Matt, in an experimental demonstration of electronic infused
12-17-2010 | IT, New Media & Software
Matt Bullas
Matt Bullas, Digital Entrepreneur, Launches New Website
Cheshire, United Kingdom (14 December 2010) - Leading UK entrepreneur Matt Bullas, who has carved out a successful career at the forefront of digital marketing and online advertising, has launched his own personal website to offer visitors tips on how to succeed in the often complicated world of SEO, advice on how to construct a powerful, effective internet marketing campaign and personal consultation services. Matt Bullas wants to share his years
06-02-2009 | Politics, Law & Society
The Yarbrough Law Group
Dallas Attorney Matt Yarbrough Highlighted Among Dallas’ Top Corporate Defende …
DALLAS — Business attorney Matt Yarbrough, founder of The Yarbrough Law Group and Yarbrough Strategic Advisors in Dallas, once again has earned a spot among North Texas’ top business defense attorneys. Mr. Yarbrough is one of 15 attorneys profiled in “The Defenders,” a special section published in the May 22 edition of the Dallas Business Journal. To compile “The Defenders” listing, Dallas Business Journal editors solicited nominations from across Dallas/Fort Worth
04-16-2009 | Leisure, Entertainment, Miscel …
MLC PR
MLC PR SIGNS 90210’s NEW HEARTTHOB MATT LANTER
Los Angeles, CA (April 14, 2009)— Mona Loring, president of MLC PR announced today that actor Matt Lanter has officially signed on for her firm’s publicity services. Currently, Matt can be seen on the CW playing the role of “Liam,” the mysterious new bad boy dating “Naomi” (AnnaLynne McCord) and in the fall, he will return as a new series regular. In addition to his role on “90210,” he also
03-11-2009 | Advertising, Media Consulting, …
What's Up Interactive
What’s Up Interactive/Daybook Recruit Matt Fazio and Jim Osterman
Atlanta – March 10, 2009 -- Richard Warner, CEO of What’s Up Interactive and founder of its sister company, Daybook Inc., has announced the addition of Matt Fazio as senior project manager and Jim Osterman as content development director. In his new role, Fazio will supervise support, maintenance and updates for existing Fox Television Stations online community dating sites, as well as managing the design and development process on an upcoming
Comments about openPR
I can't but agree to the positive statements about your portal: easy to use, clear layout, very good search function, and quick editing!
Jens O'Brien, Borgmeier Media Communication