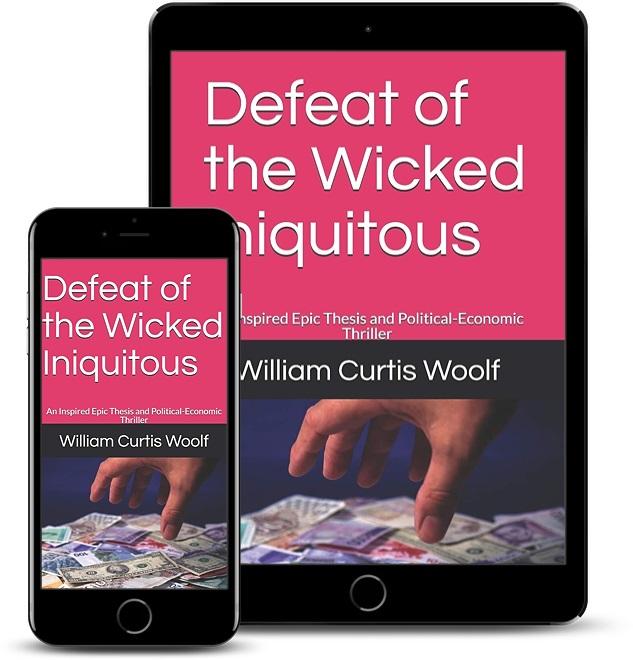 Defeat of the Wicked Iniquitous

Author William Curtis Woolf Releases New Political-Economic Thriller - Defeat of the Wicked IniquitousAuthor William Curtis Woolf is pleased to announce the release of his new political-economic thriller, Defeat of the Wicked Iniquitous. Defeat of the Wicked Iniquitous is available for purchase in print and ebook formats. Book Details: Defeat of the Wicked Iniquitous An Inspired Epic Thesis and Political-Economic Thriller By William Curtis Woolf Published: December 2019 ISBN: 978-1672383868 ASIN: B082MT95G7 Pages: 377 Genre: Political Thriller, Economic ThrillerAbout the Author: Born in 1948, Curt is the oldest of seven children. He lived in Japan where his father was stationed during the Korean War. He then lived in Carlsbad, NM, and later in Dallas, Texas, where he witnessed the shooting death of President John F. Kennedy .Curt served in the US Army Dental Corps, after which he worked as a pipe fitter and welder.Curt attended NMSU, graduating with Honors in 1975, with a BA in Government & Political Science. He then earned a Masters Degree in Public Administration and Management, again graduating with Honors.He and his wife had three children and later divorced.Curt held the position of City Planner and Zoning Administrator for Las Cruces, NM; he was the Assistant City Manager for Alamogordo, NM; he served as the Chaves County Manager, Roswell, NM; he became the CAO of the New Mexico Transportation Department, managing a $2 Billion annual budget.In 2000 he retired from New Mexico State government. Curt then co-founded and developed KidsKare PC Family Dentistry, working as CAO. KidsKare is one of the largest New Mexico networks of dental clinics.For over a decade, since the 2008 economic collapse, Curt worked passionately on developing the concept of Middle-Class Capitalism, a sound strategy for creating greater wealth and self-sufficiency among all economic classes, utilizing the capitalist tools of trade already at our disposal.Quoting Curt: "By following the carefully constructed wealth-building methods outlined in this book and on my website, we will demonstrate to the world how all seven billion humans can live sustainably and responsibly as owners of our own international corporations and businesses, large and small." Contact: Website: http://middleclasscapitalism.com Facebook: https://www.facebook.com/profile.php?id=100008811343011 Promo Link: http://bookbuzz.net/blog/political-economic-thriller-defeat-of-the-wicked-iniquitous/BookBuzz.net 59 Heritage Way Drive Rome, GA 30165Website: https://bookbuzz.net/blog/political-economic-thriller-defeat-of-the-wicked-iniquitous/BookBuzz.net helps indie authors, hybrid authors, and small publishers promote and market their books. We also help with book reviews, publicity, and more. Let's Create Some Buzz For Your Book!!!