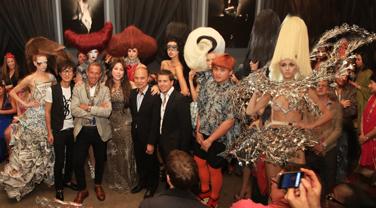 STYLO is an Asian fashion entertainment concept created to engage the sophisticated
international audience that world class sporting events bring. Launched in Kuala Lumpur to promotethe 10th Malaysian Formula One by Her Majesty the Queen of Malaysia, Professor Jimmy Choo OBE and Mercedes-Benz, its bold and sometimes decadent style of fashion parties often used avant-garde fashion creations as its excuse, themed theatrical presentations as its tool, socialites and celebrity
supermodels as its participants and the well-heeled audience as its ardent supporters.
Its concept with the tagline “fashion’s merely the excuse” and all parties being strictly by invitation and recommendation only quickly spread to several cities in Asia and has found its way to London enroute to the 2012 Olympics with ‘The 7 Deadly Sins: Recycling is the new Black’; which STYLO ran successfully with Mercedes-Benz in 2008 and Lamborghini in 2009. The 7 Deadly Sins will debut with fashion and Bollywood in Mumbai next month for the upcoming Indian F1 as offcial party of the Mercedes Petronas F1 Team. It's 2012 Stylo-lympics preview was held on the first Sunday of Fashoin week with Professor Jimmy Choo as Guest of Honour at Home House, 21 Portman Square.
However, there was no established fashion designers pushing ready-towear possibilities to buyers but rather a bunch of emerging, hungry young ones that wowed the fashion-savvy London crowd with their collection made out of 108kg of recycled wastes transported from Asia.
STYLO is headed by leading Malaysian PR practitioner, Dato’ Nancy Yeoh who is also Chairman of the Ford Models Supermodel of the World Search in Malaysia, and teamed up with Jonny Dodge UK Entrepreneur and well known leisure tycoon, to create this amazing event.

01-07-2021 | IT, New Media & Software
Jimmy Thakkar
Website Design Coupon Code By Jimmy Thakkar
(NEWS) Thursday, Jan 7, 2021 – Jimmy Thakkar today announced the new coupon code system that will work for both, the cost estimate form as well as the invoice generation. With the introduction of this coupon system, the users can not only enter the coupon code in the cost estimate form, but they can also share the code during the time of invoice creation and avail the discount. While introducing
01-07-2019 | Arts & Culture
PR for Jammy Jimmy
“The Fantastic Adventures of Jammy Jimmy” is published
ISBN #978-1789553741 “The Fantastic Adventures of Jammy Jimmy” is published An explosive, thrilling, debut novel by Ian Joseph About the Book: Jimmy Spark is the boy next door, bright, sparkling and mad on football. After his father is killed in a hit-and-run accident, his mission is vigilance – to keep an eye on High Woodley and its residents. But whenever he comes across trouble, as he frequently does, matters quickly escalate out of control,
07-03-2012 | Leisure, Entertainment, Miscel …
Auroa Entertainment, LLC
Jimmy McNichol is 51 Years Old & Back
This week, actor Jimmy McNichol celebrates his 51st birthday with bittersweet memories and the release of “Night Warning” on DVD. Actor, musician, environmentalist Jimmy McNichol, (a.k.a. James Vincent McNichol III,) is celebrating his 51st birthday on July 2nd, and his return to TV and film. From the late 1960’s to the early 1990’s, actor Jimmy McNichol’s face was “the face seen everywhere” on television and the big screen, which is exactly
07-05-2011 | IT, New Media & Software
Devilicious T/A Crafty Devil
Crafty Devil Welcomes Jimmy Spratt, MLA
DUP MLA for South Belfast, Jimmy Spratt, recently dropped in to meet with Newtownbreda-based web application developers Crafty Devil. The Beechill Road business specialises in the development of web-based process and workflow management software, helping organisations to improve productivity and reduce costs. Despite the economically challenging conditions which characterize the current business environment, Crafty Devil continues to grow – significantly increasing both revenue and employment numbers. Speaking at Crafty
03-18-2010 | Tourism, Cars, Traffic
Colpitts World Travel
Local Jimmy Fund Volunteer Recognized for Fundraising
Dedham, Mass., March 17, 2010 — More than 150 volunteer tournament organizers were honored by the Jimmy Fund Golf Program during its annual Appreciation Night on Friday, February 5 at The International Golf Club in Bolton, Mass. By organizing golf events, these volunteers helped raise $6.1 million in 2009 for cancer care and research at Dana-Farber Cancer Institute through Jimmy Fund Golf, one of the nation’s largest charity golf programs. Sudbury,
02-09-2009 | Fashion, Lifestyle, Trends
All Things Media
Is he really the next Jimmy Buffett?
With the success that Country Music Artist Billy Craig has had with his song Flip Flops, it’s hard not to compare him to the great Jimmy Buffet. Although he has done quite well around the world with country radio, Billy does have that singer-songwriter mentality. “There’s something that happens when I pick up my acoustic guitar that somehow just takes me away into this creative songwriting thing” says Billy.
Comments about openPR
9 o'clock: discuss press release with client, 10 o'clock: submit release to openPR, within the briefest possible time release is published and displayed in a prominent place on openPR.de. I am thrilled!
Zehra Spindler, Calypso Now! - Communication Agency