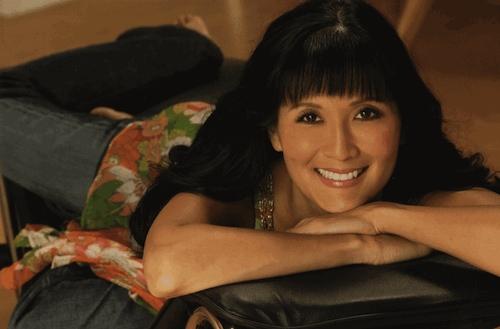 Suzanne Whang, perhaps best known for hosting HGTV's House Hunters and her thought-provoking and hilarious stand-up comedy chararacter Sung Hee Park, will be auctioning off framed topless photos at the benefit auction to be held in her honor on September 24. Speaking about the unusual works of art, Suzanne said, "Recently, I realized that trying to keep this stage IV metastatic breast cancer secret was literally killing me. So I've created a new act which encompasses my five year journey with the disease. Visual aids have been important in telling my story. Fear of losing a job, losing money, losing lovers and husbands silences women with breast cancer all over the world. So I did an unprecedented topless photo shoot, exposing my deformed left breast, which I have no intention of fixing with reconstructive surgery. I have come to see it as beautiful, with the help of my amazing main squeeze, Eric Schwartz. I burst into tears when the shoot began, but Eric kept repeating "You are beautiful, and you are brave" until I believed him, calmed down, and finished the shoot. I think the photos are amazing. Throughout this journey I have redefined for myself what it means to be feminine, beautiful, and sexy. These images are snapshots of a medical underworld, a record of self-discovery, and proof that it is possible to claim your beauty no matter how you look." Blythe Danner, Laraine Newman, Tracy Newman, Tom Bergeron, Marianne Williamson, Kelly Carlin, Richard Lawson, Rick Overton, Reverend Michael Bernard Beckwith, Dylan Brody, Ken Kragen, Billy the Mime and Eric Schwartz are just a few of the celebrities who will appear to honor and support Suzanne Whang at a Gala Fundraiser and Auction on September 24. Learn more at http://www.suzannewhang.com.Suzanne Whang was first diagnosed with breast cancer in 2006. In April of this year she came out of the closet publicly with her diagnosis of stage IV breast cancer, and began to openly talk about the impact of her five year continuing journey with the disease. The fundraiser starts at 6:00 pm with a cocktail reception, followed by a 7:00-9:30 pm show, and a 9:30 pm - midnight after-party. The Los Angeles location for the event will revealed to guests after ticket purchase.For complete details, visit http://www.suzannewhang.com.High Value Viral Media helps celebrities and businesses reach millions through conten they want.HIgh Value Viral Media 2629 Main St. #163 Santa Monica, CA 90404

05-27-2021 | Business, Economy, Finances, B …
BookBuzz.net
Suzanne Skees & Sanam Yusuf Release New Self-Help Book - MY JOB Gen Z
Suzanne Skees & Sanam Yusuf Release New Self-Help Book - MY JOB Gen Z Suzanne Skees & Sanam Yusuf are pleased to announce the release of their new book, MY JOB Gen Z: Finding Your Place in a Fast-Changing World. Released by the Skees Family Foundation in March 2021, the book is already receiving rave reviews from readers and reviewers. Nonfiction business/career studies, sociology of work, real-life vignettes of young people at
05-07-2018 | Fashion, Lifestyle, Trends
Black Card Books
Suzanne Duncan Launches New Book Aiming to Inspire Single Parents
Author Suzanne Duncan announces availability of her newly published book in an official launch event set on May 20th at Eltham, Victoria in Australia. The journey of single parenthood is difficult and challenging to many. Daily, single parents encounter serious challenges as they try to raise their families. Sometimes they have no one to turn to for inspiration and advice. Author and coach Suzanne Duncan has provided insights that single parents
02-15-2012 | Arts & Culture
HighValueViralMedia
Celebrity HGTV Host Suzanne Whang Debuts One Woman Comedy Show about Breast Canc …
On February 5 at Beyond Baroque in Venice, CA, Suzanne Whang opened her one woman show "Cracked Open" before a sell-out crowd. You can buy tickets to the remaining show at http://www.suzannewhangcrackedopen.com. Cracked Open radically and comically dissect issues of race, culture, gender and politics, and addresses the actress's ongoing journey with Stage 4 metastatic breast cancer. This funny and autobiographical show received a standing ovation from an audience comprised primarily
04-01-2011 | Business, Economy, Finances, B …
Adelphi University
Adelphi to Host Acclaimed Author and Business Journalist Suzanne McGee
Adelphi University is pleased to host a book discussion with Suzanne McGee, author of Chasing Goldman Sachs. The event will take place on Monday, April 18, 2011; at 1:00 p.m. in room 109 of Adelphi’s Hagedorn Hall of Enterprise, 1 South Avenue, Garden City, NY. Limited space is available and pre-registration is required. In Chasing Goldman Sachs, Ms. McGee provides an incisive look at the forces that transformed Wall Street from
01-24-2011 | Business, Economy, Finances, B …
Becoming Human Again
Becoming Human Again by Suzanne Meier
Born in Switzerland, Suzanne has lived in six countries, but for most of her life in the United States. After being caught in an act of war and experiencing a near-death experience in Sri Lanka, she began an in-depth search for truth, healing, and spiritual awakening. Atlanta, GA, January 24, 2011 -- "A brilliant and scathing expose of the factors in modern society that enslave us both mentally and physically…You will
09-01-2010 | Arts & Culture
BookSwim Online Book Club
‘Mockingjay’ Author Suzanne Collins Honored with First Booksie Award
Not every author is the cliché quiet introvert who has little online marketing expertise. Suzanne Collins, who wrote the Underland Chronicles and The Hunger Games, has won the first BookSwim.com Booksie Award for her marketing success of new young-adult title, Mockingjay.  Collins is honored for her exciting embrace of internet technology at a time when so many publishers are ambivalent about it. The Booksie Award was created to honor all types
Comments about openPR
Your portal is fast, simple, and easy to use. Others may have more functions but they also demand more editing time, you have to preformat the text in order to achieve a good result etc. I think openPR is really fantastic!
Andreas Knepper, wallmedien AG