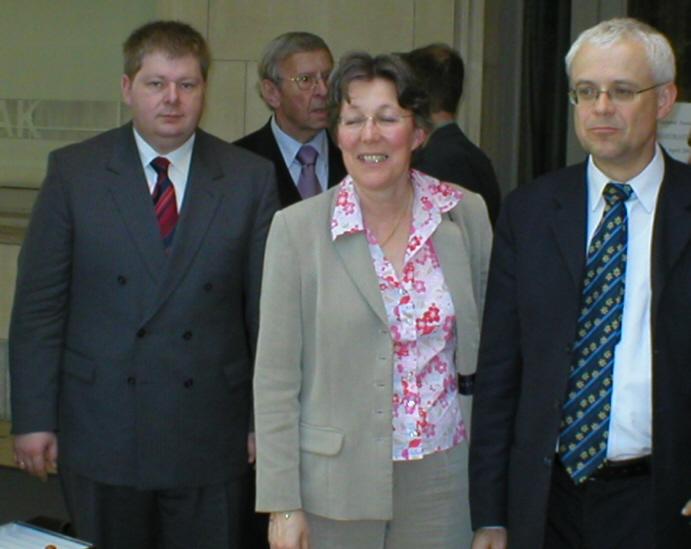 Alenfelder, who explained the EAC’s position and the current situation in Germany in a joint statement with EAC Director Stefan Prystawik (London) to representatives from all 27 EU member states, is convinced that significant steps ahead can be taken with the support of the EU Commission.
Alenfelder is an attorney for labor law in Bonn, Germany and Legal Expert for the National Focal Point of FRA in Vienna, Austria.
Alenfelder: “Talks at the conference with those involved, representatives of the commission and AGE Director Anne-Sophie Parent have shown how important and necessary the elimination -in particular of age discrimination in the workplace – actually is.”

EU Commissioner Spidla joined AGE Director Parent’s view in expressing that older people are no less productive in the workplace than younger employees. Claiming otherwise would amount to ‚utter and absurd prejudice’, Spidla said. He went on calling for a decisive fight against discrimination.

The demand on the EU level and in the member states was broadly supported – following the US example - to have only such employers benefit from public procurement and subsidies who are EAC certified.

Alenfelder acknowledged AGE’s leading work with the coordination between Older People’s Associations in the EU and the Commission. “It became clear that the European Union recognizes the tireless and detailed work over the years by AGE Director Anne-Sophie Parent, who is also a valued consultant to the Federal Government [in Germany]”, the Permanent Representative said.

We are an Non-Governmental Organization. Our aim is to eliminate unjust discrimination in Europe. We oppose any kind of discrimination and wish to establish harmonious and just living and work conditions for all European citizens and migrants.

In particular we oppose discrimination for reasons of (in alphabetical order):
• age
• beliefs
• disability
• gender
• race and ethnic origin
• religion
• sexual orientation
We are concerned citizens supporting professional and grassroots movements in their quest for the essential human right of living free from unjust discrimination. It is thus pre-eminent to create a legal environment tending to those needs – matching our motto “Per Iurem Ad Iustitiam” as Justice requires proper legal provisions.

We co-ordinate anti-discrimination efforts across Europe. We ensure regular professional and scientific analysis on current developments, a selection of which appears in the “EAC Review”. The EAC provides a forum and opportunity for the exchange of ideas for all people working in the EU on aspects of Anti-Discrimination.

The European Anti-Discrimination Council upholds and promotes the EU policies for anti-discrimination and supports the EU-wide campaign "For Diversity. Against Discrimination."

03-28-2018 | Health & Medicine
Pharmaceutical & Healthcare
Erectile Dysfunction: A Prominent Age Related Disorder
Erectile dysfunction is known as the medical condition of penis, a recurrent inability of a man to reach and/or to maintain a penile erection sufficient for/during sexual activities. It is most probably an age-related factor, progressive condition, affecting some level of disorder (mild, moderate or severe) in about 50% of men aged 40-70 years, and with the increase in the age, severity of erectile dysfunction also increase with a
03-04-2013 | Arts & Culture
American College of Orgonomy
Personal Relationships in the Digital Age
Princeton, NJ March 1, 2013 - Few advances in technology have presented such extremes of wonderful possibilities and such questions and challenges as do social media and digital communication. Have you ever used the Internet to reconnect with an old friend or distant relative? Do you keep in nearly constant contact with friends by texting them? Have you ever been frustrated when someone interrupts a conversation with you to receive
01-24-2013 | Tourism, Cars, Traffic
La Residence Hotel & Spa
Vietnamese Hospitality Comes of Age
HUE, Vietnam — Twenty years after Vietnam emerged from decades of war and privation, lighting up on the radar screens of travelers worldwide, maturation of the country's hospitality industry reached a new milestone this month as La Residence Hotel & Spa appointed Phan Trong Minh as its new general manager. The Hue native succeeds a string of foreign general managers and marks a turning point in Vietnam's hospitality industry. "For so
02-10-2012 | Business, Economy, Finances, B …
Gower Publishing Ltd
Age Discrimination
Age Discrimination looks at how both young and old can be penalised by prejudice against their age group. This comprehensive new book is essential to practitioners responsible for HR issues, finance, operations, service delivery, quality and customer relations, and for those with a policy focus or academic interest in diversity issues. Gower is recognised as one of the world's leading publishers of specialist business and management books and resources. Our publishing
04-20-2011 | Science & Education
Eurocentres Language Learning Worldwide
Victorian Age Meets Digital Age
The digital age is entering the elegant Victorian age Eurocentres school building. In some classrooms interactive whiteboards have been installed and are now being intensively used with language students from all over the world. The interactive whiteboards have been helping classes become much more exciting and closer to real life. This user-friendly technology enables students to better engage with and discuss up-to-date news or life-style features, enjoy playful grammar exercises,
05-15-2008 | Business, Economy, Finances, B …
PerTOOLS
PerTOOLS Enter The Video Age
Today in London, PerTOOLS, the provider of Time Series Analysis and Data Extractor tools launched their new website complete with Video Demonstrations of all their products. The PerTOOLS approach has always been to help clients understand PerTOOLS products and that is the reason why PerTOOLS offer free trials - to allow people to experience the tools with no commitment. The addition of Video Demonstrations to the PerTOOLS website will go
Comments about openPR
OpenPR is clearly structured and remains true to its principle of confining itself to the essential parts. OpenPR has proven to be a very good and reliable partner to our media agency: Within the shortest time the releases are online and go down well with the media representatives. The success of OpenPR is reflected in the steadily increasing number of press releases. It is good that OpenPR exists!
Ursula Koslik, Director Marketing & PR, F+W Hamburg