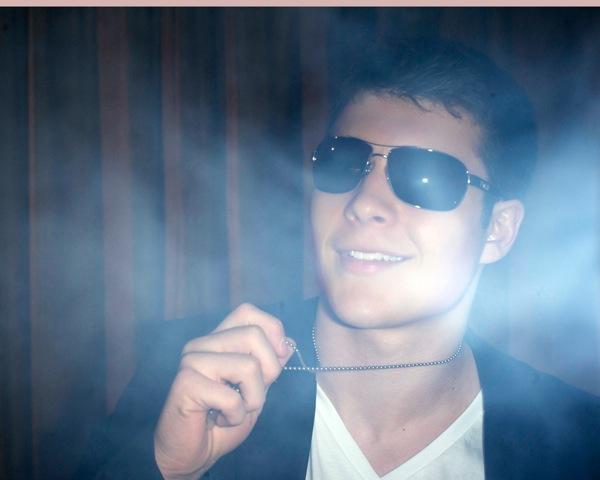 Possibly one of the best known Grammy Award Winning R&B/Disco acts to hit the music scene in the late 1970s was Philadelphia's The Trammps, with their hit song “Disco Inferno”, which was featured on the number one selling soundtrack of all time 'Saturday Night Fever'. Most recently 50 Cent released a hit single "Hate It Or Love It" along with Mary J and the Game that sampled The Trammps hit "Rubber Band"; a track from The Trammps first album 'The Legendary Zing Album...And Other Trammps Hits', that also included "Hold Back The Night", "Where The Happy People Go" and "Where Were You When The Lights Went Out In New York City". Now, one of the hottest new songwriters to emerge from Philly, teen songwriting prodigy Matt Cermanski, has penned a new song for Philly R&B legends The Trammps. Matt's uncle Edward Cermanski is the longtime keyboard player (since the early '70s) for the band, and persuaded original Trammps singers Doc Wade and Stanley Wade to check out one of Matt Cermanski's concerts. Both musicians loved Matt's performance, especially the song “Chapter One”, and decided to record the song as a new Trammps single, which is the first new release from the group in many, many years. “I first saw Matt Cermanski at a small coffee house in Phoenixville, PA,” recalls Doc Wade, original Trammps singer and founder of the group. “After listening to a few songs I realized that Matt had an exceptional talent and can go a long way in the music business. After hearing Matt's EP I have become even more impressed with his vocal , musical and song writing ability. It was at that point The Trammps had a discussion with Matt on The Trammps recording one of Matt's songs 'Chapter One' ” (The Trammps "Chapter One" iTunes Link: http://itunes.apple.com/us/album/chapter-one/id461466408?i=461466798&uo=4)“I didn't think of The Trammps covering the song when I was writing it,” says Matt, “but when I heard what they did with the song I loved it. Music with a saxophone and that R&B style has been something I've been trying to add to my writing style. It has a different flavor too it that just grooves.” Along with composing the song, Matt plays guitar and sings some back up on the track. The Trammps continue to tour the world with dates in the UK, Germany, Netherlands and the USA, while “Chapter One” has been receiving airplay on the BBC in the UK.Matt Cermanski's new song was written on the heals of his first video release produced and filmed by Matteo Mobile in 2010. Matt Cermanski's “Darling” is a teen-angst ridden video with an all too familiar theme of forbidden teenage love. When first posted, the video caused a major sensation on YouTube with over 3000 views in the first couple weeks by word and mouth alone, and now close to a year later the video has received over 20,000 views! Matt Cermanski's performance in the video is none less than exciting and and honest. The song “Darling”, which is included on Matt's new EP 'Long Road Home', is skillfully crafted and showcases Matt's adept songwriting prowess – years ahead of his age (now 18) “I started playing guitar when I was 13 years old,” recalls Matt, “and I have been around music pretty much my whole life, singing as long as I can remember. My top musical influence would have to be Rob Thomas from Matchbox 20. I really like the songs he writes and the style of music. Another major influence is my Dad (renown music promoter Steven Cermanski), because he is the one who really got me into music and has helped me out so much.” Matt is also influenced by Stevie Wonder and Marvin Gaye.Much to the anticipation of Matt Cermanski's fans around the world, he recently released a 7-song EP on iTunes titled "Long Road Home". The EP is a personal insight into Matt's life, especially the song “Empty House”, which was written for Matt's grandmother, whom he lost to Cancer. Also included are both “Darling” and “Chapter One”, which are garnering some major radio airplay in the tri-state area on 93.3 WMMR PA , and 93.7 WSTW DE.The EP can be purchased at http://itunes.apple.com/us/artist/matt-cermanski-band/id461455049Matt Cermanski's “Darling” video can be accessed at www.youtube.com/user/matteomobile#p/a/u/0/tmUN_3BDpvkMatt Cermanski Band Facebook page http://www.facebook.com/pages/Matt-Cermanski-Band/102991086418133The Trammps Official Website: www.thetrammps.net Press Inquries: Glass Onyon PR, glassonyonpr@cs.comGlass Onyon PR is a full-line music and entertainment publicity company.William James Glass Onyon PR PH: 828-350-8158 www.glassonyonpr@cs.com P.O. Box 18254 Asheville, NC 28814

06-18-2012 | Arts & Culture
Glass Onyon PR
Veteran Makeup and Special FX Artist Jonah Levy Opens State-of-the-Art Makeup & …
Orlando, FL – Veteran makeup and special FX artist for over 18 years, Jonah Levy, has opened BLUE WHALE STUDIOS Inc in Orlando, Florida. With nearly 3000 square feet of workspace, Blue Whale Studios Inc is aimed at becoming one of the premier makeup houses on the east coast! The BLUE WHALE STUDIOS Inc philosophy is simple: Create a harmonious relationship with each client, and help bring whatever it is they
09-22-2011 | Leisure, Entertainment, Miscel …
Glass Onyon PR
JD Malone & The Experts Launch 'Do What You Can Do'
Philadelphia, PA - JD Malone has a plan unlike anything else ever attempted by a relatively unknown artist - an innovative way to address the fallen spirit of average Americans who just don't feel connected and don't think their voices can ever be heard. The DO WHAT YOU CAN DO Project, inspired by a song of the same name from his acclaimed new CD/DVD 'Avalon' (ItsAboutMusic.com), is the Philadelphia roots
09-09-2011 | Leisure, Entertainment, Miscel …
Glass Onyon PR
Boston's Blue Moon Harem To Release Long Awaited Second Album 'Finland'
Boston, MA - Music aficionados across the globe are waiting anxiously for the sophomoric release by one of Boston's hidden musical treasures Blue Moon Harem. Having survived some of the toughest years in the music business, the dynamic and diversely-talented duo at the heart of Blue Moon Harem, guitarist Demetri Joannou and guitarist/vocalist Jon Bix are ready to take on the next phase of their career with the release of
08-16-2011 | Leisure, Entertainment, Miscel …
Glass Onyon PR
Singer/Songwriter Brent Byrd, 'Peaceful Rebel Man' On The Move
St. Augustine, FL - Performer Brent Byrd, aptly titled 'the peaceful rebel man' is on the move with the release of his 2011 CD release 'Time To Start Livin' '. Recently returned from a highly successful Southeast/Midwestern tour in support of his new CD release, Brent Byrd is quickly becoming known as an explosive live performer. In order to fully express himself as a solo artist, he incorporates loops and

10-23-2012 | Leisure, Entertainment, Miscel …
Torpedo Booking Agency
The Voice of Germany: Matt Voodoo - Statement
I don't own a smartphone & was focusing my attention on the road over the weekend, so I've unfortunately not been able to make a proper statement until now. I've only this morning finally had the opportunity to look over all the press & comments. It's become clear to me that a couple things need to be set straight. I'd like everyone to know that I had already decided & informed
09-30-2011 | Arts & Culture
The Boston Beehive
The Beehive Presents Matt Garrison
WHAT: On Thursday, October 6th, 2011, Matt Garrison, a virtuoso bass guitar player from New York State, will be returning to his college town for a special performance on The Beehive’s stage as a part of the ‘Beehive Brooklyn Series.’ Starting at 10:00PM-2:00AM, the audience will have the opportunity to see Matt, in an experimental demonstration of electronic infused
12-17-2010 | IT, New Media & Software
Matt Bullas
Matt Bullas, Digital Entrepreneur, Launches New Website
Cheshire, United Kingdom (14 December 2010) - Leading UK entrepreneur Matt Bullas, who has carved out a successful career at the forefront of digital marketing and online advertising, has launched his own personal website to offer visitors tips on how to succeed in the often complicated world of SEO, advice on how to construct a powerful, effective internet marketing campaign and personal consultation services. Matt Bullas wants to share his years
08-13-2010 | IT, New Media & Software
Trianz
Matt King joins Trianz as Vice President - Management Consulting
August 3rd 2010 - Trianz announced the appointment of Matt King as Vice President - Management Consulting Services. Trianz Management Consulting practices provide execution strategy, organization, process and technology related advisory and implementation services to clients worldwide. Matt King will spearhead the strategy, growth and delivery of client services in these practices. Matt has over 25 years of experience in professional services in various industry sectors including Information, Communication, Manufacturing,
06-02-2009 | Politics, Law & Society
The Yarbrough Law Group
Dallas Attorney Matt Yarbrough Highlighted Among Dallas’ Top Corporate Defende …
DALLAS — Business attorney Matt Yarbrough, founder of The Yarbrough Law Group and Yarbrough Strategic Advisors in Dallas, once again has earned a spot among North Texas’ top business defense attorneys. Mr. Yarbrough is one of 15 attorneys profiled in “The Defenders,” a special section published in the May 22 edition of the Dallas Business Journal. To compile “The Defenders” listing, Dallas Business Journal editors solicited nominations from across Dallas/Fort Worth
04-16-2009 | Leisure, Entertainment, Miscel …
MLC PR
MLC PR SIGNS 90210’s NEW HEARTTHOB MATT LANTER
Los Angeles, CA (April 14, 2009)— Mona Loring, president of MLC PR announced today that actor Matt Lanter has officially signed on for her firm’s publicity services. Currently, Matt can be seen on the CW playing the role of “Liam,” the mysterious new bad boy dating “Naomi” (AnnaLynne McCord) and in the fall, he will return as a new series regular. In addition to his role on “90210,” he also
Comments about openPR
9 o'clock: discuss press release with client, 10 o'clock: submit release to openPR, within the briefest possible time release is published and displayed in a prominent place on openPR.de. I am thrilled!
Zehra Spindler, Calypso Now! - Communication Agency