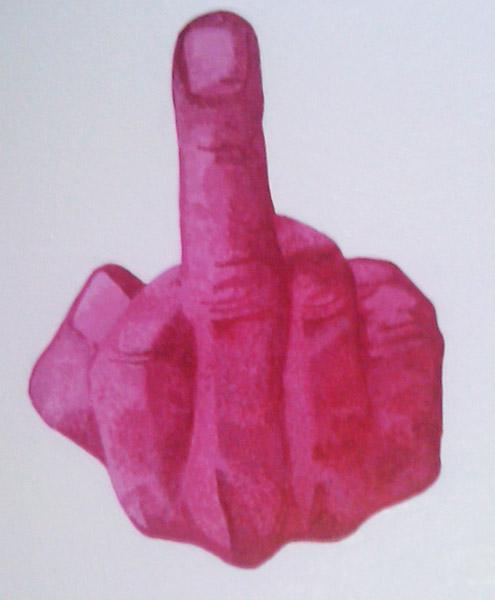 Contemporary artist Marco Smigovaggi’s first Asian art exhibition originally scheduled for the 5th September in the Shamrock pub in the Khao San Road area of Bangkok Thailand, ‘Run as smoothly as we expected’ says promoter Mark Alexander of SEO 2 Marketing, ‘If not better’. The low profile exhibition which was rescheduled at the last minute to the 7th September was held with intention to raise international awareness of the British born painter’s work by tickling the tastes of international travellers frequenting the world famous backpacker hub.‘We are not sure why we had to reschedule to the 7th’ says his promoter and close friend ‘maybe the management thought there would be a better turn out midweek, but it went like a dream and there was a great turnout with many travelers, fans and art critics visiting the venue especially to see the artists paintings. We are especially grateful to the management and staff for securing the bar which was home for the night of two of the artist’s paintings ‘Soul’ and ‘Flamingo’ that were on loan from a private collector who had previously purchased the two paintings for over $100,000 US dollars.The flat cap wearing Yorkshire born painter who resides in Bangkok, Thailand, has become somewhat of a character among the capital’s art elite. Modern artist, Smigovaggi who was born in Wakefield, West Yorkshire, has often been compared to the likes of Pablo Picasso and Salvador Dali but denies any influence by the two artists. ‘The Only influence in my life is me’ says the artist, although he has been known to openly show his admiration for the works of Dali and Modigliani.For more information on the exhibition and the art of Marco Smigovaggi visit http://www.seo2marketing.com/marcosmigovaggiart.htmlMarco Smigovaggi is a new up and coming contemporary artist, based in Bangkok. Originally from Yorkshire in the U.K. Marco has been compared to the likes of Pablo Picasso and Salvador Dali. SEO 2 Marketing will be promoting the works of Marco through a series of exhibitions in locations around Bangkok.Mark Alexander Promoter SEO 2 Marketing mark@seo2marketing.com 437/309 Baankaew Villa Village Soi 35 Charansanitwong Road Bangkok 10700 +66846812477

04-12-2021 | Advertising, Media Consulting, …
Fupping Media
Promoting British Business and British Startups With BestStartup.co.uk
BestStartup.co.uk has taken on the necessary and enjoyable task of promoting innovative startups and British business achievements this year. The business successes of last year were hard-won and did not garner the attention that they deserved. Businesses in the UK have faced double-pronged difficulties in recent months, both from a worldwide pandemic and due to changing tax laws. Despite the challenges of 2020, British business has risen from the ashes to
01-27-2021 | Business, Economy, Finances, B …
Copely Developments
British Gardeners Vote with their Feet and Buy British
UK consumers are becoming more conscious of what they are buying after the emergence of Covid. A survey commissioned by Made in Britain reveals strong evidence that consumers are more likely to buy British to support the economy. • 90% of Britons felt it was important to buy British products generally • Two-fifths prefer to buy British irrespective of cost • Seven in 10 people believe that buying British can help tackle climate change Copely Developments,
04-30-2014 | Industry, Real Estate & Constr …
Aeon Lighting Technology Inc.
LED Lighting for British Royalty
(April 28, 2014 – Taipei) When it comes to quality and safety, ALT puts priority over the two above all else. Therefore it comes as no surprise that even the Queen of England opted for ALT’s products. About 1,100 pieces of ALTLED® Metis dimmable chandeliers in warm white are installed in a Grade 1 Listed building in Central London next to Buckingham Palace, Lancaster House. Lancaster House was used during
12-14-2011 | Leisure, Entertainment, Miscel …
Brave Soul
Brave Soul Set to Revitalise British Clothing
Brave Soul Set to Revitalise British Clothing Following a difficult year for British fashion, the launch of Brave Soul, a new clothing brand serving both men and women, has promised to kick-start a stuttering industry. When Britain's fascination with fast fashion faltered in the spring of 2011, several leading high-street retailers posted substantially reduced profits. The chief driver of the demise was identified as the recession, which had caused most firms in
04-28-2011 | Business, Economy, Finances, B …
Learning RP British Accent
British Accent Webinar Dates Announced
A week long programme of webinars announced about a new British Accent training resource called The Ultimate RP British Accent Learning Resource. Bristol, UK, April 28, 2011 -- RP British Accents students can now register to join a webinar to find out more information about the release of a brand new British accent training product. “The Ultimate British Accent Learning Resource” has been created by Alison Pitman from LearningBritishAccent.com and
12-13-2010 | Tourism, Cars, Traffic
Twitbed
escaping British winter last Minute!
Christmas 2010 is approaching – the number one time of celebration of the year, if only the weather were not so cold and rainy. How different is Alicante in Spain, where the weather is still mild and sunny, perfect for escaping the snow and traffic chaos. The Twitbed network for private holiday rentals offers an even better value for travelers staying at Twitbed in Alicante: Subscribers of the free newsletter get twice as much holiday
Comments about openPR
9 o'clock: discuss press release with client, 10 o'clock: submit release to openPR, within the briefest possible time release is published and displayed in a prominent place on openPR.de. I am thrilled!
Zehra Spindler, Calypso Now! - Communication Agency