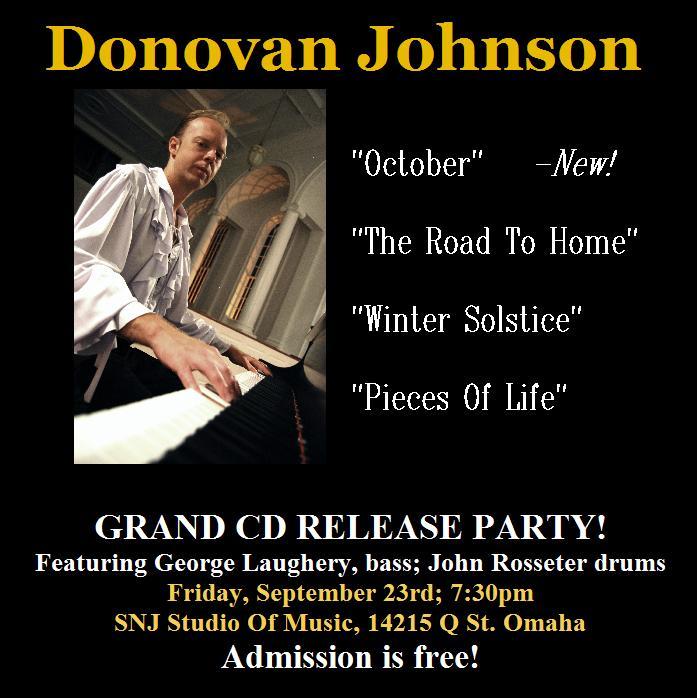 Fans have waited a year for Donovan's latest release, "October." what they didn't expect was a complete product overhaul. All previous recordings have been re-mixed and mastered, and will be available for sale on Friday September 23rd!Donovan Johnson has had a very busy year. In addition to keeping up with the demands of the full time musician, Donovan has been in the studio recording his latest release, "October." "October is an album that, like my previous three, has music from many different periods of my life. Some of the tunes are new, and others have just been waiting for the right time to go into production. I don't think it's necessarily the right thing to do to record a song as soon as you write it. Sometimes, the music has to sit and age for awhile, develop character."Donovan explains that, like biological life, the music often needs time to breath. "Much of what I write has so much of my own personality in it. That includes the need to wake up, wash, and drink several cups of coffee before going out into the world. Sometimes that doesn't happen until mid afternoon! And then there's that rare morning when I wake at 6am and think, "Wow. I'm ready. Let's do this! And, there are a few of those tunes scattered throughout "October" as well.So why "October?" "October is a month that doesn't get a lot of attention. Consider June and July, or November and December. Even February. These months bring immediate images of Holidays, memories and the like to the minds of most people. "October" makes us think of Halloween, but there is so much more to October. It's a dark month, getting darker quite literally. But it's also one of the most beautiful months of the year, as the shrubs, plants and trees all make their transition. I wanted to display that image in the music found on the album. Even the "Island Suite" is not what one might expect to hear, but more so images of the mystical found in island villages, and pictures of the night sky seen from an old world perspective."In addition to recording "October" Donovan has been re-mixing and re-mastering his previous three recordings at KNL Studios in Omaha. "I think overall the previous three albums sound good. I could live with them. But why settle for that? Technology is opening so many other doors for us, and that means more sounds and sound quality capability. I wanted to go back, revisit what I'd recorded and make it sound that much brighter, that much better. Call me a perfectionist, I am!"All material is scheduled to be ready for re-release on Friday, September 23rd. This is the same day that Donovan will be holding his "Grand CD Release Party" featuring the new album "October." The release concert will be held at The SNJ Studio Of Music in Omaha, 14215 Q St, at 7:30pm Admission is free!"I'm looking forward to a great time with everyone. I know that folks are going to be thrilled with what they hear that evening, and hopefully they'll take a piece of it home with them to share."More about Donovan can be found on his website, at www.donovanjohhnson.netEnlightened Piano Radio is an online radio station committed to the independent pianist. Visit us at: www.enlightenedpiano.com2346 S 34th St. Omaha NE 68105

08-30-2011 | Arts & Culture
Enlightened Piano Radio
Enlightened Piano Radio-Our Official Launch
Donovan Johnson loves piano music. So much so, that he's pioneered a radio station that's devoted to it. And not only is the radio station devoted to piano music, it's committed to artists of the genre who live and work independently of their art. "I was so tired of the struggle, and I knew that there were many others out there with the same struggle to contend with.

01-12-2021 | Advertising, Media Consulting, …
data bridge market research
Slaughtering Equipment Market Opportunity Analysis and Industry Forecast, 2020-2 …
To thrive in this rapidly transforming marketplace, today’s businesses call for innovative and superlative solutions. Businesses can accomplish an unmatched insights and expertise of the best market opportunities into their relevant markets with the help of this Slaughtering Equipment Market research report. This market report gives clear idea about the market potential for each geographical region based on the growth rate, macroeconomic parameters, consumer buying patterns, possible future trends, and
12-17-2018 | Business, Economy, Finances, B …
Market Research Hub
Global Safety Razor Market Insights, Region, Type, Trend, Analysis and Forecast …
A newly compiled business intelligent report, titled “Global Safety Razor Market Insights, Forecast to 2025” has been publicized to the vast archive of Market Research Hub (MRH) online repository. The study revolves around the analysis of (Safety Razor) market, covering key industry developments and market opportunity map during the mentioned forecast period. This report further conveys quantitative & qualitative analysis on the concerned market, providing a 360 view on current
09-14-2017 | Business, Economy, Finances, B …
Qyresearch.us
Global Straight Razor Market 2017- Dovo, Boker King Cutter, Thiers-Issard, Bison …
The Report entitled Global Straight Razor Market 2017 analyses the crucial factors of the Straight Razor market based on present industry situations, market demands, business strategies adopted by Straight Razor market players and their growth scenario. This report isolates the Straight Razor market based on the key players, Type, Application and Regions. The Straight Razor industry research report mainly focuses on Straight Razor industry in global market. The major regions which
10-11-2010 | Associations & Organizations
Conscience Entertainment Group
HABITAT FOR HUMANITY SF/SCV’S “AMERICAN DREAM WALK” SCORES PERFECT 10 WITH …
October 6, 2010, Los Angeles, CA – Grab a tool kit, lace up your sneakers and get ready to Walk with the Stars at Habitat for Humanity San Fernando/Santa Clarita Valleys’ fundraiser, “American Dream Walk,” at Pacoima Plaza on Saturday, October 16, 2010. Join Mark Ballas, award-winning dancer on “Dancing with the Stars,” as he leads handy citizens and celebrities on a 5K walk from Pacoima Plaza to Habitat Pacoima Site,
10-07-2010 | Leisure, Entertainment, Miscel …
Kaboom Radio
Kaboom Radio News Confirms Donovan Has Been Nominated for Induction Into 2011 Ro …
Kaboom Radio News has confirmed that Donovan has been nominated for Induction into the 2011 Rock And Roll Hall of Fame. The first British folk troubadour who truly captured the imaginations of early Beatles-era fans on both sides of the Atlantic, Donovan Leitch made the transition from a scruffy blue-jeaned busker into a brocaded hippie traveler on Trans Love Airways. As a folkie on the road with Gypsy Dave, Donovan
06-01-2010 | Business, Economy, Finances, B …
Russell Bedford International
Russell Bedford US member, PMB Helin Donovan LLP, appoints three more partners
Fast-growing Texas member of international CPA firm network now has 18 partners. PMB Helin Donovan LLP, the Russell Bedford CPA network member firm in Texas and San Francisco, has appointed three new partners. Mickey O'Neal, CPA, has been appointed in the Houston office as an audit partner. He has significant SEC and private practice assurance experience. His clients have historically been focused in a variety of industries including
Comments about openPR
OpenPR is clearly structured and remains true to its principle of confining itself to the essential parts. OpenPR has proven to be a very good and reliable partner to our media agency: Within the shortest time the releases are online and go down well with the media representatives. The success of OpenPR is reflected in the steadily increasing number of press releases. It is good that OpenPR exists!
Ursula Koslik, Director Marketing & PR, F+W Hamburg