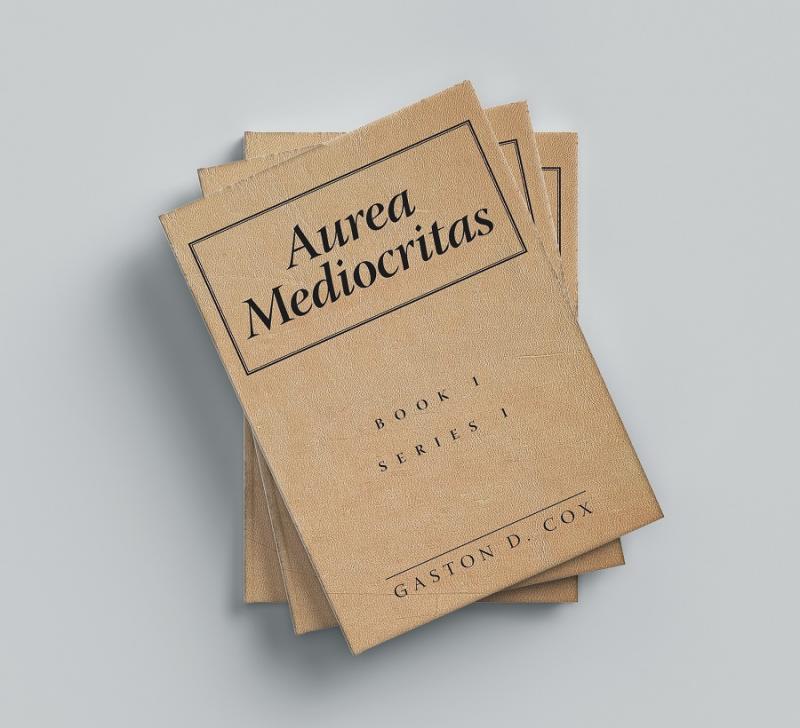 Author Gaston D. Cox Releases New Short Story Collection - Aurea MediocritasAuthor Gaston D. Cox is pleased to announce the release of his short story collection, Aurea Mediocritas: A Book of Short Stories. Released in October 2019, the book is already receiving rave reviews from readers and reviewers. The term, Aurea Mediocritas, refers to the golden mean, a balance between two extremes. ¬ e characters in “Queerious”, faced with insurmountable odds in a society unaccepting of same-sex relationships and the hidden secrets which have divided the family.The story "In a Nutshell," features an expedition in the Amazon, where an ancient ritual amulet is discovered by a young boy. He makes a wish on the amulet and rapidly began to age twenty-five years older. The boy's father makes a bargained and faces the consequences of his sacrifice at a price too dear to pay. The father desperately searches to find a balance between dealing with his own demons and striving to save his son.In “For the Sake of my Enemies,” a young Japanese girl immigrates to the USA and joins the international police task force she was assigned to a US Federal case. On an assignment in Japan to bring back a crime boss who has fled from prosecution, she unravels an old Japanese cold case and found the man who killed her father and brother. She struggles to and balance, revenge or her mission.Book Details: Aurea Mediocritas: A Book of Short Stories By Gaston D. Cox Publisher: Page Publishing Published: October 2019 ISBN: 978-1642141689 (print) ISBN: 978-1642141696 (ebook) Pages: 318 Genre: Short StoriesAbout the Author: Gaston D. Cox, a famous American writer, graduated from Irvine University College of Law and now lives in China. He fled the United States and came to China because of his wounds. First, he worked as an English teacher at Qiqihar University, then he transferred to Shanghai because he was not tolerant of the cold. He has been a university professor, legal adviser and medical representative for several years. Although a seven-foot man is a strong man, I have a delicate and sensitive heart. When I came to China, I was inspired and fell in love with writing. I published many books. The words are passionate and popular with many Chinese fans. His representative works include Cries of insanity, Aurea Mediocritas, Sounds of Silent, The Seventh Plague, and Life Cubed.Contact: Reedsy profile: https://reedsy.com/author/gaston-d-cox Promo Link: http://bookbuzz.net/blog/short-stories-aurea-mediocritas-a-book-of-short-stories/Purchase Links: https://www.amazon.com/Aurea-Mediocritas-Book-Short-Stories/dp/1642141682 https://www.barnesandnoble.com/w/aurea-mediocritas-gaston-d-cox/1135464724?ean=9781642141689 https://www.indiebound.org/book/9781642141689BookBuzz.net 59 Heritage Way Drive Rome, GA 30165Website: http://bookbuzz.net/blog/short-stories-aurea-mediocritas-a-book-of-short-stories/BookBuzz.net helps indie authors, hybrid authors, and small publishers promote and market their books. We also help with book reviews, publicity, and more. Let's Create Some Buzz For Your Book!!!

01-25-2018 | Media & Telecommunications
KKN
The Best Self Help Book
The Self Help Book By Kris Kourtis. The Self Help Book is an Audio Book that provides real solutions to altering your life for the better. Kris Kourtis uncovers the real secrets to life. You will be able to change an are of your life that needs changing . From zero to hero. Lose weight Get Rich. Develop great intuition Find your gift. This is not a book of rules but rather an awakening Book
10-21-2016 | Advertising, Media Consulting, …
Still Beautiful The Color of Beauty
Great New Book
Still Beautiful “The Color of Beauty”: Powerful New Book of Poetry Spans Life’s Journey; Written as a ‘Companion’ for those Reaching Out to God & Loved Ones. It’s a window into a past that’s still with us today Written from the heart and experiences of Kevin Bates, ‘Still Beautiful’ fuses fun, family love, spiritual, emotional and thought-provoking poetry to guide readers through life’s triumphs and defeats. Built into three compelling sections, every
04-29-2011 | Arts & Culture
Black Hills Publications
The Whiskey Boys Book Release
Black Hills Publications: We are pleased to announce the publication of The Whiskey Boys by Jacqualyn Simmons. Charleston, South Carolina, United States of American April 28, 2011 -- A local native of Johns Island published “The Whiskey Boys”, a condensed collaboration about the events surrounding the whiskey insurrection commonly known as the whiskey rebellion. This book is a brief riveting account of heroism illustrated by President George Washington’s historical march
01-03-2011 | Politics, Law & Society
Ze'ev Shemer
Featured Book
FOR IMMEDIATE RELEASE Featured Book: ISRAEL AND THE PALESTINIAN NIGHTMARE By Ze’ev Shemer Published on December, 2010 iUniverse Publishing January 1st 2011 Israel and the Palestinian nightmare is not only a reliable reference book; it is a captivating description and review of the Arab-Israeli conflict. It offers an honest account of where Israel went wrong, covers facts relating to the origins of the nation of Israel and the profound effect that history has had
11-26-2010 | Associations & Organizations
Black Hills Publication
New Book Release
FOR IMMEDIATE RELEASE: November 25, 2010 Black Hills Publications We are pleased to announce the Publication of Missing Papa by Jacqualyn Simmons. Charleston, South Carolina, November 24, 2010 – A local native of Johns Island has published “Missing Papa”, a short story elaborating about the events on the Simmons family local farm. This book is a captivating short story and illustration about farm life on Johns Island in South Carolina. The author narrates about
08-25-2009 | IT, New Media & Software
FotoInsight Ltd.
FotoInsight's New Photo Paper Book Makes Book Bulge Disappear
Today FotoInsight launches a new version of FotoInsight Designer with new lines of photo albums on photographic paper, new features like fading frames and festive templates and the addition of Linux and Mac OS versions. Cambridge, 20 August 2009. - Europe's most popular photo book software is now also available for Linux and Mac OS. Against an ever growing number of photo book services, FotoInsight is increasing its technological lead with the
Comments about openPR
We publish our press releases on openPR.de because we like people who are "open" - just like us.
Frank Obels, CEO, INCONET - Informationssysteme, Communication und Netzwerkberatung GmbH