When fibers burn: Quick window replacement instead of laser failure 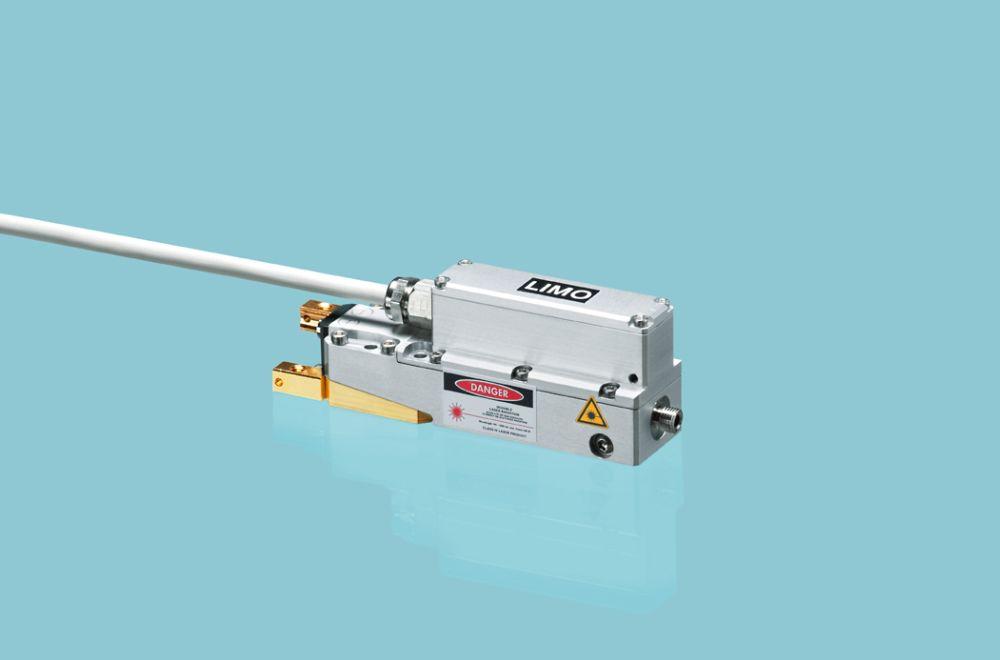 Medical laser with replaceable window: "Window of opportunity" for protection from laser failure LIMO Lissotschenko Mikrooptik GmbH of Dortmund have opened up a special "window of opportunity" for their compact medical lasers. The Westphalian company has given its L-Mount type fiber-coupled diode laser modules an additional replaceable window which saves the user both time and money. The L-Mount modules have a very compact, hermetically sealed housing. The laser (output: 30 to 60 watts) generates a beam with a wavelength of 808 to 980 nanometers which is directed at its location by a glass window and a fiber connection with razor-thin fibers (diameter: 200 and 400 micrometers). Medical technology predominantly uses lower priced disposable fibers which should be replaced after every operation. The frequent replacing of fibers increases the risk of laser failure, for instance, as a result of accidental fiber soiling or damage. Plastic droplets and smoke residue are deposited on the window, soiling it or even damaging it. Users then have to replace the complete laser module or send it for repairs. "LIMO has something which can minimize downtimes caused by destroyed fibers and the resultant negative effects", explains Dipl.-Ing. (FH) Andre Grütz, Director of Medical Solutions. "We now fit our L-Mount laser housings with an additional replaceable window which protects the actual fixed window from soiling and damage". Now, if the fibers are destroyed, the user only has to replace the replaceable window. LIMO will be presenting this exclusive solution, which is otherwise only to be found on larger systems, in January 2012 at BIOS and at Photonics West in San Francisco (USA).LIMO Lissotschenko Mikrooptik GmbH Bookenburgweg 4-8 44319 Dortmund, Germany Tel.: +49 - 231 - 22241 - 0 Fax: +49 - 231 - 22241 - 140 E-Mail: kontakt@limo.de Web: www.limo.de Kontakt für weitere Informationen: Andre Gruetz, a.gruetz@limo.de Kontakt PR & Marketing: Nicole Krebs, n.krebs@limo.deFounded in 1992 - 200 employees - 24 nations - more than 300 patentsAt LIMOs headquarters in Dortmund, Germany, an international team of more than 200 engineers, physicists, technicians and many other specialized staff develops, manufactures & distributes micro optics, optical systems, diode lasers & laser systems. LIMO was founded near Paderborn in 1992, relocated to the “Technologiezentrum Dortmund” in 1995 and operates today from industrial park “Dortmund Wickede”, located in the direct neighborhood of the Dortmund airport. On 10,000 m² floor space, LIMO runs approximately 2000 m² of clean room and 800 m² of in-house metal machine shops. At present LIMO holds more than 300 patents.We regard ourselves as strategic partner to leading companies using laser photons. Our mission is to make business partners in the materials processing & photonic industries more successful with our cutting edge technologies. We are world-market leader in diode laser optics and have been awarded for this technology with the “world’s first innovation award 2007”. (Innovationspreis der deutschen Wirtschaft 2007) A laser beam can be effectively shaped and directed by the use of this award-winning technique – therefore, it is possible to create, e.g., linear or rectangular beam shapes. The following industries benefit from our customized solutions: Microlithography, medical equipment, photonics (solid-state and fiber lasers), flat panel display- and photovoltaic production, automotive manufacturing and all other industries that use high power lasers.

You can edit or delete your press release When fibers burn: Quick window replacement instead of laser failure here

04-16-2012 | Industry, Real Estate & Constr …
LIMO Lissotschenko Mikrooptik GmbH
Blue Laser Light – Precision Pure: Monolithic Focusing Optics for Single Emitt …
Dortmund-based LIMO Lissotschenko Mikrooptik GmbH is far from being a greenhorn when it comes to blue laser light. The new trend is towards single emitter diode lasers (spectral width: 420 to 470 nanometres) which, due to higher outputs of up to 1-2 W, are becoming increasingly popular in lithographicy, the structuring of flat panel displays and in measuring technology (e.g. in particle analysis). The blue semiconductor laser emitters' claim to
03-02-2012 | Industry, Real Estate & Constr …
LIMO Lissotschenko Mikrooptik GmbH
Compact, powerful and creative: The little mite with radiant charisma - L-Mount: …
At first glance the visitors at LASER World of Photonics China will probably not notice anything. Talk is of a new version of the L-Mount fiber-coupled diode laser module which LIMO Lissotschenko Mikrooptik GmbH of Dortmund will display in Shanghai (booth #W1.1231). "With its 60 watts our newcomer delivers very high output for the very small fiber diameter of 200 micrometers", Dipl.-Ing. (FH) Andre Gruetz (Director of Photonics & Medical
01-06-2012 | Industry, Real Estate & Constr …
LIMO Lissotschenko Mikrooptik GmbH
Lutz Aschke new member of the board of directors of the Laser Institute of Ameri …
Dr. Lutz Aschke has been elected to the board of directors of the Laser Institute of America (LIA) for the period 2012 to 2014. As the Managing Director of LIMO, Lutz Aschke is a regular player on the international stage. For over 40 years now, the mission of the LIA has been to bring together the best minds in laser technology in cross-continental specialist conferences, to exchange current knowledge on
10-13-2011 | Business, Economy, Finances, B …
LIMO Lissotschenko Mikrooptik GmbH
Paul Harten becomes Managing Director of LIMO
Dr. Paul Harten, long-standing Prokurist (person vested with general commercial power of representation) and CMO at LIMO, has been named third Managing Director as of 1st October 2011. Since he joined LIMO in 2002 Paul Harten has left his own decisive mark on the company's external image with his personality and dedication. He will immediately provide Managing Directors Dr. Vitalij Lissotschenko (founder and owner) and Dr. Lutz Aschke with more

05-17-2019 | Business, Economy, Finances, B …
Market Research Hub
Global Atmospheric Furnace Market Size, Share, Production, Capacity, Market Perf …
This research report titled “Global Atmospheric Furnace Market Insights, Forecast to 2025” has been added to the wide online database managed by Market Research Hub (MRH). The study discusses the prime market growth factors along with future projections expected to impact the Atmospheric Furnace Market during the period between 2019 and 2025. The concerned sector is analyzed based on different market factors including drivers, restraints and opportunities in order to
12-17-2012 | Business, Economy, Finances, B …
SGS Consumer Testing Services
SGS to Host Aerospace Day in Dortmund, Germany
SGS is pleased to announce the December 5, 2012 Open House event at the SGS premised located in Dortmund, Germany. All interested parties are cordially invited to participate in the SGS Aerospace Day. Registration is required. Body: The testing and inspection company SGS is extending its services for the aerospace industry and has recently been awarded the Nadcap Merit Status for the Material Testing Laboratories (MTL) sector. The SGS Dortmund laboratory
11-25-2011 | Sports
Onlineprinters GmbH
Football Legends Live at Onlineprinters-CUP 2011 in Dortmund
Online print shop presents football derby on 26 December in the Westfalenhalle Neustadt an der Aisch, Germany – The Bavarian online print shop Onlineprinters GmbH takes its commitment to high-class football one step further by hosting the indoor football tournament "Onlineprinters-CUP" on 26 December 2011. "Until now, we have been represented with perimeter advertising as sponsor to the Bundesliga clubs. With the Onlineprinters-CUP we have gone one step further and given
08-03-2011 | Industry, Real Estate & Constr …
LIMO Lissotschenko Mikrooptik GmbH
Ecological jack of all trades from Dortmund - 1.3 kW diode laser with 30-percent …
LIMO Lissotschenko Mikrooptik GmbH, located in Dortmund, world market leader in the field of refractive micro-optics, is increasingly conquering the world of laser systems. The latest example bears the nondescript name, LIMO1300-F200-SL808/9xx-EX1472, but it is a special type of "green system" in the truest sense of the word. The beam-shaping experts have developed a new 1.3 kW diode laser that has wall-plug efficiency of 30 percent, (including cooling). A comparison
01-25-2010 | Arts & Culture
Mahler Chamber Orchestra e.V.
The young British conductor Edward Gardner replaces Seiji Ozawa in the upcoming …
Following the unfortunate news of Seiji Ozawa’s illness and his subsequent cancellation of all appearances in the first half of this year, British conductor Edward Gardner has now been confirmed as his replacement for the concerts in Cologne, Dortmund and Ferrara. The young music director of the English National Opera, considered one of the most promising young talents of his generation, gives his debut with the Mahler Chamber Orchestra (MCO)
10-27-2009 | Arts & Culture
Mahler Chamber Orchestra e.V.
First MCO Academy Concerts under the Direction of Daniel Harding in Cologne and …
At the end of October, the Mahler Chamber Orchestra (MCO) returns to its residence in North Rhine-Westphalia to rehearse and perform its first programme together with students of the Orchesterzentrum|NRW. Under the direction of Daniel Harding, this concert, the first of the so-called MCO Academy Concerts, will be performed in the Cologne Philharmonic (Nov 2) and at the KONZERTHAUS DORTMUND (Nov 3). The programme features Stravinsky’s Rite of Spring, one
Comments about openPR
OpenPR ist the nicest and most clearly laid out PR platform I have seen to this day. The press releases are displayed very nicely and clearly and without any unnecessary frills. The updates are fast and the finished release looks appealing and is clearly legible. Even with 16 years of experience one discovers new things from time to time. Congratulations!
Gabriele Ketterl, Director Marketing & PR, Menads