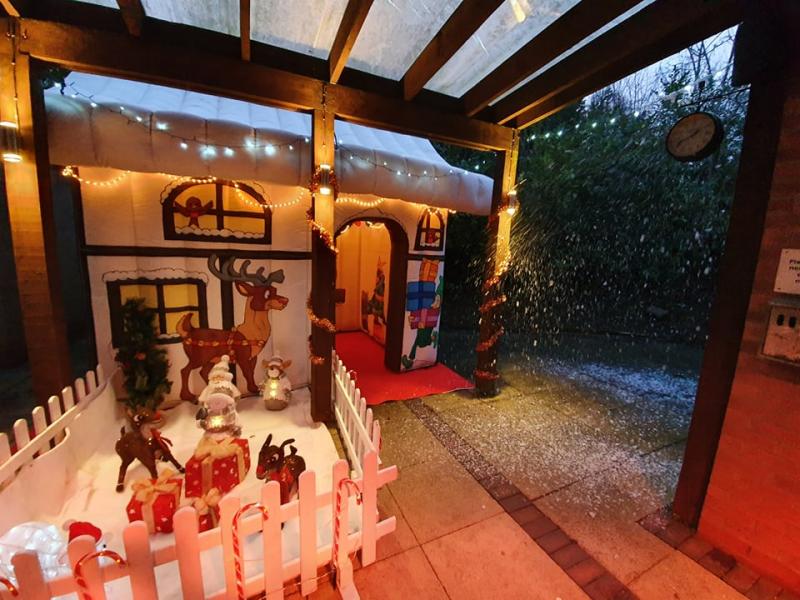 Summary: Following the arson attack at Merridale Primary School in Pennfields, which destroyed a forest school that was due to be used as a Santa's Grotto, local company Bouncy Bouncy Boo Castle Hire donated their own inflatable grotto so pupils could still meet Father Christmas.Body: An arson attack at Merridale Primary School's didn't just destroy their forest school facility – it took with it plans to use the building to host a Father Christmas event. Thankfully, local company Bouncy Bouncy Boo Castle Hire donated their inflatable Santa's Grotto on 18th December, so St Nick could still attend the school and meet the pupils.On the night of Wednesday December 4th, heartless vandals set the forest school alight. This wooden hut was regularly used by reception and nursery pupils, and staff thought their plans to hold a Santa's Grotto event had been scuppered because of the senseless crime.Mitchell Tooth, of Wolverhampton-based bouncy castle hire company Bouncy Bouncy Boo Castle Hire, read about the arson in the local press and decided to donate his company's inflatable Santa's Grotto to the school so that the event could go ahead.Mr Tooth said: "I couldn't believe that anyone would deliberately burn down part of a primary school. "Merridale Primary School has some of the most dedicated and devoted staff and teachers, and reading about the crime felt like a punch in the gut. I can't imagine how people who work or send their children there must feel."I just had to do something.“I was overwhelmed by how grateful the staff were with our donation of the inflatable Santa's Grotto."Every teacher came up to me to thank me, but seeing the smiles on the children was thanks enough!"Headteacher Simon Lane said: "Thanks to Bouncy Bouncy Boo for donating the hire of their inflatable Santa's Grotto this week. Our children and families loved visiting Santa in there!"We were thrilled to accept this kind donation. We want to say a big thank you for getting in touch and helping us out."The grotto looked fantastic.”PTA member Ellen Sanders said: "After our forest school playhouse was recently burnt down in an arson attack we had nowhere to turn into a Santa's Grotto. "After hearing about us on the news, Bouncy Bouncy Boo got in touch with us and generously offered us an inflatable one to use for free. "We have celebrated Christmas with our children at school today with the inflatable Santa's Grotto and it has been amazing. The children were thrilled and had the most wonderful afternoon. "Mitch arrived promptly and set everything up for us and the inflatable was brilliant. "We will be looking to hire the Grotto again next year as it was such a success. Thank you for your generosity."Phone: 07980041585 Address: Bouncy Bouncy Boo castle hire Station Dr, Wolverhampton WV10 7BU Email: info@bouncybouncyboocastlehire.co.uk Contact: Mitchell ToothBouncy Bouncy Boo Castle Hire (https://www.bouncybouncyboocastlehire.co.uk) is an inflatable rental company based in Wolverhampton and operating in areas including Dudley, Walsall, Cannock, Telford and Birmingham. It also offers other party rental equipment such as fun food machines and rodeo bulls. To speak with them, please call 07980041585.

05-17-2019 | Tourism, Cars, Traffic
Golden Rooster Limousines & Wine Tours
BEst Wineries in Santa Barbara
Best Wineries in Santa Barbara Wine Country. If you are going on a wine tour in Santa Barbara, you are in luck. Santa Barbara wine country is a very special place. The lifestyle, the nature and the wineries make this area truly spectacular and unique. Wine country (Santa Ynez area) is about 45 minutes north of Santa Barbara. This is the majority of grapes that end up
11-05-2018 | Business, Economy, Finances, B …
Santa Clara County Federal Credit Union
Santa Clara County Federal Credit Union Sponsors Santa Clara Teacher Recognition …
County Federal Continues to Partner with the Santa Clara County Office of Education to Honor Teacher Excellence and Commitment. San Jose, CA, USA -- The Santa Clara County Federal Credit Union (http://www.sccfcu.org) is proud to be a sponsor of the Teacher Recognition Celebration organized by the Santa Clara County Office of Education (SCCOE) again this year. This marks the 23rd year that County Federal has partnered with the SCCOE to recognize
12-01-2011 | Leisure, Entertainment, Miscel …
Save-A-Pet Animal Rescue and Adoption Center, Inc.
“Santa Paws” Is Coming to Castaways
(Port Jefferson Station, NY) — Save-A-Pet Animal Rescue and Adoption Center, Inc. announced that “Santa Paws” is coming to Castaways, Save-A-Pet's retail shop- and-adopt store. Santa will be at Castaways on December 3 and 11 from noon to 3 p.m. A professional photographer will be on hand to take family portraits as well as pet portraits. You will receive a 5x7-inch print the same day. All dogs should be placed on a
12-23-2010 | Arts & Culture
LiveAuctionTalk
Collecting Santa This Week at LiveAuctionTalk.com
He is the moonlight caller who arrives once a year when everyone is sound asleep. From the world of perpetual cold, the snow-frosted traveler in the red suit, white beard and pink cheeks has many faces in many countries. His Yuletide figure is a welcome site year after year as he’s resurrected from the Christmas box one more time. An emissary of love and hope, Santa’s appeal
09-29-2008 | Tourism, Cars, Traffic
Enchanted Springs Ranch
Santa Goes West
SAN ANTONIO – This December, Enchanted Springs Ranch invites families to celebrate the holidays the Old West way at its annual Cowboy Christmas. Vicki Schmidt, co-owner of Enchanted Springs Ranch with her husband Steve, calls the event a chance for guests to see the Old West in a new way. “We’re going to have the whole place decorated,” she says. “Imagine spending the holidays in an authentic Old West town
12-20-2005 | Leisure, Entertainment, Miscel …
KEW RECORDS
New single has Santa backin' the Pack
"You knew it was bound to happen sooner or later. Santa's gone green and gold. The red suit is history, and so is the "ho, ho, ho!" He wears a Cheesehead hat and his suit is now green and gold. He no longer chuckles ho, ho, ho. He rides on a sleigh shouting Go Pack, Go. Cause Santa Claus dun got a taste
Comments about openPR
9 o'clock: discuss press release with client, 10 o'clock: submit release to openPR, within the briefest possible time release is published and displayed in a prominent place on openPR.de. I am thrilled!
Zehra Spindler, Calypso Now! - Communication Agency