Author Terrence Crimmins Promotes His Biographical Novel - Who was Joseph Pulitzer? A Novel 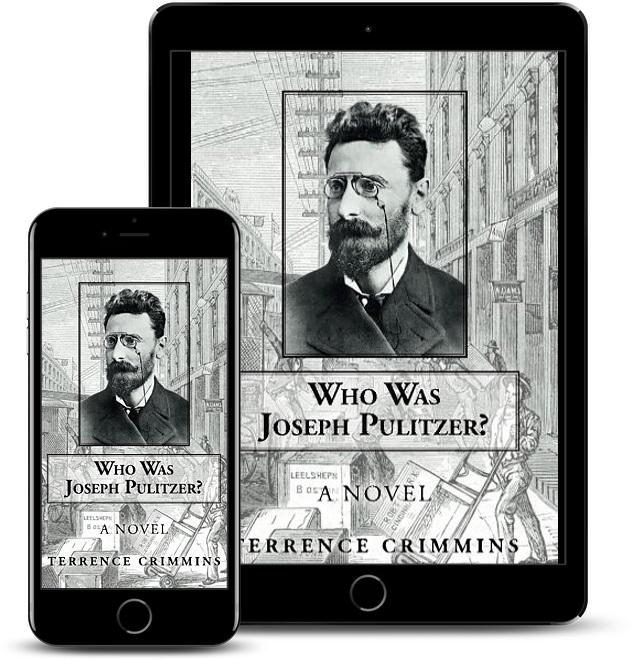 Who was Joseph Pulitzer?

Author Terrence Crimmins Promotes His Biographical Novel - Who was Joseph Pulitzer? A NovelAuthor Terrence Crimmins is pleased to announce the promotion of his biographical novel, Who was Joseph Pulitzer? A Novel.Pulitzer was a rags to riches story who revolutionized the newspaper industry by introducing sensationalism and shaking the ground of American politics by demanding changes to stop the rich from exploiting the poor. Crimmins' novel brings us into the day to day life of this unique genius, who arrived in America as an immigrant who barely spoke English yet twenty years later developed and edited two of the biggest newspapers in the nation. Pulitzer's run-ins with the other newspaper titans of the Gilded Age show us the men who laid the foundations of American journalism, and his confrontations with the wealthy robber barons brings us into the drama of how Pulitzer began a surge for reform that was so very important to improve the quality of American life. Pulitzer's wife tries desperately to comfort the man whom she deeply loves, yet their romance is shattered by how Pulitzer's workaholic Napoleonic ambitions came to cause him a terrible breakdown, causing this newspaper widow further to the sidelines in this captivating drama of American life. Crimmins' dramatic novel brings us into fundamental elements at the heart of American society, describing the life of a man who fought essential political battles that changed life as we know it in the United States.Who was Joseph Pulitzer? A Novel is available for purchase in print and ebook formats.Book Details: Who was Joseph Pulitzer? A Novel By Terrence Crimmins Publisher: Knollwood Press ISBN: 978-0991378319 ASIN: B01JDLHDY2 Pages: 278 Genre: Biographical NovelAbout the Author: Terrence Crimmins was the youngest of nine in an Irish Catholic family in Pittsburgh, Pennsylvania, where he rooted for the Pirates and the Steelers. He continued his Catholic education at Boston College, where he also learned to drink beer and play rugby, and received Bachelors and Masters degrees. Crimmins has done newspaper work, online columns, published in a scholarly journal, optioned a screenplay for a biographical picture, and taught history in Baltimore, Maryland, for a number of years. He is now relaxing back in Pittsburgh, and writing short stories and an novels about the comedy and the drama of the American experience.Contact: Website: http://www.terrencecrimmins.com Twitter: https://twitter.com/TerryCrimmins Facebook: https://www.facebook.com/TerrenceCrimmins/ Promo Link: http://bookbuzz.net/blog/biographical-novel-who-was-joseph-pulitzer-a-novel/Purchase Links: https://www.amazon.com/Who-was-Joseph-Pulitzer-novel-ebook/dp/B01JDLHDY2/ https://www.barnesandnoble.com/w/who-was-joseph-pulitzer-terrence-crimmins/1124627235?ean=9780991378326 https://www.kobo.com/us/en/ebook/who-was-joseph-pulitzer https://books.apple.com/us/book/who-was-joseph-pulitzer/id1171552204?mt=11&app=itunes https://www.indiebound.org/book/9780991378319BookBuzz.net 59 Heritage Way Drive Rome, GA 30165Website: http://bookbuzz.net/blog/biographical-novel-who-was-joseph-pulitzer-a-novel/BookBuzz.net helps indie authors, hybrid authors, and small publishers promote and market their books. We also help with book reviews, publicity, and more. Let's Create Some Buzz For Your Book!!!

You can edit or delete your press release Author Terrence Crimmins Promotes His Biographical Novel - Who was Joseph Pulitzer? A Novel here