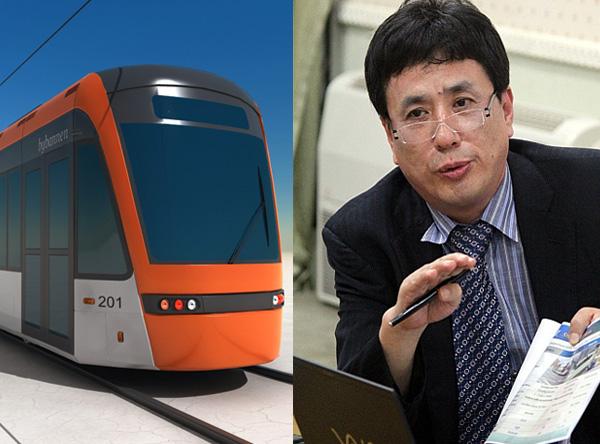 Phuket, Thailand: After more than a decade of waiting, proposals for the Phuket light railway transit system finally seem to be gathering some momentum.The Phuket Provincial Office finalised its list of potential bidders for the project on June 16th 2011.Phuket Vice Governor, Niwit, confirmed that there were ten potential investors, including Thai and foreign firms.Sung-Ming Lee, the President of Dohwa Engineering, was in Phuket this week to assess the scheme’s viability. The South Korean firm are thought to be one of the front runners to be awarded the contract.“We have been inspecting Phuket’s public transportation for two days. So far we have seen that Phuket has transportation problems and we have seen a lot of traffic jams,” Sung-Min Lee commented.Lee presented several proposals to Phuket Governor, Tri Augkaradacha, at a meeting held at the Provincial Hall in Phuket Town on August 10th. These included a number of suggested routes the new transport system could take across the Island.At the meeting the Phuket Governor was invited to visit Dohwa’s headquarters in South Korea so he could see some of their completed projects for himself.“This company is showing a clear interest in investing in Phuket’s public transportation. They are paying attention to our requirements and they are offering to finance the project,” commented Governor Tri.Lee will now return to Korea and finalise plans for the project. Established in 1957, Dohwa Engineering is ranked 106th in ‘The Top 150 Global Design Firms List, 2011’. Published annually in July, the list ranks the world’s 150 largest designs firms based on total design specific revenue.The proposal for a light-rail link in Phuket dates back decades. A feasibility study was finally carried out in early 2006. The subsequent report estimated that building a single rail link between Phuket International Airport and Phuket Town would cost around twenty billion baht.Article source - http://blog.phuketoceanvillas.com/phuket-light-railway-plan-gathers-speed/About the author:Rebecca Smith is a real estate journalist and author with over 15 years experience. She has published 3 books to date:'The Definitive Guide to buying property in Phuket' - http://blog.phuketoceanvillas.com/the-definitive-guide-to-buying-property-in-phuket-pr/'10 simple ways to slash your marketing costs and sell more property' - http://www.ovgmarketing.com/10-simple-ways-to-slash-your-marketing-costs-and-sell-more-property/'The Definitive Guide to buying property in Thailand' - http://blog.oceanvillasgroup.com/the-definitive-guide-to-buying-property-in-thailand-pr/Rebecca is currently the sales director for Phuket Ocean Villas and Ocean Villas Group.149/12 Srisoonthorn Road, Cherngtalay, Thalang, 83110, Phuket, Thailand