Rosenberg Fans Canada will exhibit at the Toronto Buildings Show – 2019 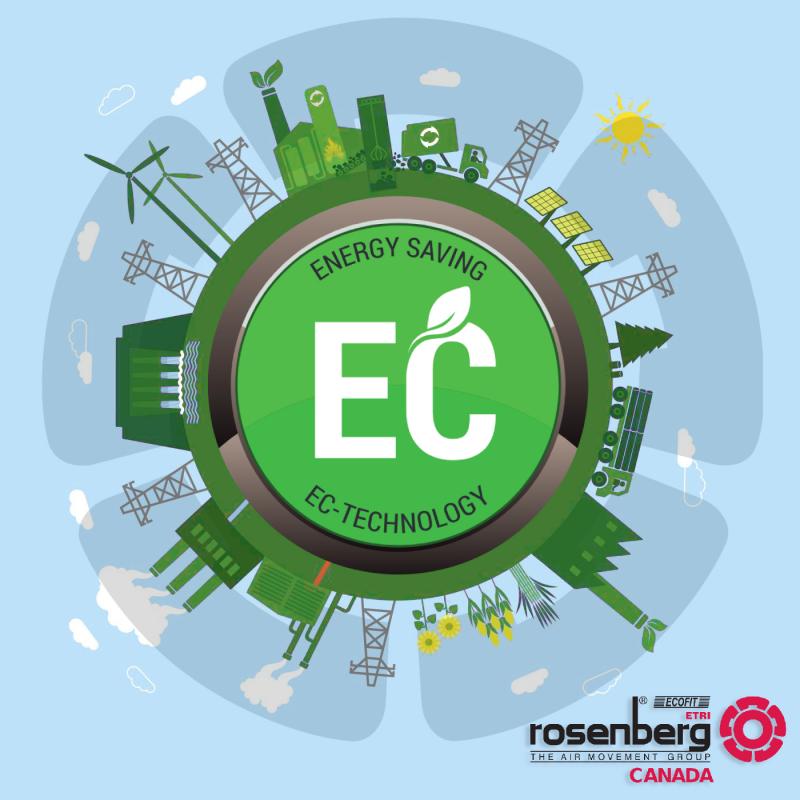 Rosenberg Fans Canada Ltd, a global manufacturer of industrial fans and blowers announced today that they will be exhibiting at the Toronto Buildings Show-2019. The event will take place at the Metro Toronto Convention Centre (MTCC) from December 4th to 6th, 2019. The Buildings Show is one of North America’s largest exhibitions for the construction industry. It brings together 30,000 attendees from key industries to create a premier networking event. As the largest exposition and conference of its kind in North America, the show is recognized as a leader in professional development. During the exhibition, Rosenberg Canada will be showcasing an ECFanGrid, its energy-efficient multiple-fan array along with with another HVAC retrofit solution for contractors – EC Fan Coil Upgrade kit. Both systems are powered by Rosenberg's variable-speed EC (or ECM) fans. The ECFanGrid is perfect for HVAC retrofit or replacement projects requiring improved Air Handling Unit efficiency. While the Aftermarket EC Fan Coil Upgrade kit is perfect for reducing noise and improving efficiency in existing residential fan coils. “For a property owner or a facility manager downtime is a big concern. HVAC fan failures need to be prevented because the cost and disruption are significant. Replacing a single large fan in your system becomes tremendously challenging and brings up other questions. Would that fan fit through the doors or the narrow hallways? What is the crane rental cost? What’s the lead time for replacement parts? Should we look at a completely new unit?”, says Alexander Loginov, Rosenberg Canada’s VP, “A big focus in a building’s operating costs is electrical energy consumption. If your HVAC systems are running with 20 to 40-year-old single fans, they can be costly. Typically, 40% (and as high as 70%) of a building's energy goes to running HVAC systems. As much as 50% of that energy is being consumed by the fans. Rosenberg’s EC fans use different motor technology which is more efficient. Our fan array system, the ECFanGrid, has many advantages versus a single fan system. It provides redundancy that eliminates the chances of having downtime if a fan fails. Our modular systems can be carried through exiting doorways which saves considerable renovation costs when installing a retrofit solution. Our variable speed controllers are built into every fan motor. If you want to automate the fans to provide constant air volume or constant air pressure, we offer controllers that quickly interface to our fan systems to do that.” Rosenberg Fans Canada will be at booth # 1918 in the PM EXPO section of the Toronto Buildings Show. The company offers a wide range of high-quality industrial fans, blowers, and motors, along with HVAC retrofit solutions. Rosenberg is a world’s recognized leader in ECM fans manufacturing. For more details on the ECFanGrid, their energy-efficient multi-fan air handling system and Rosenberg Canada's retrofit project portfolio, visit http://ecfangrid.ca. Contact Rosenberg Canada at info@rosenbergcanada.com for more information on their products and services or visit them at https://rosenbergcanada.com.Rosenberg Fans Canada Ltd. 1210 Mid-Way Blvd, Unit 20 Mississauga, ON, L5T 2B8 Tel: (905) 565-1038 (ON, Head Office) Tel: (514) 592-7462 (QC, NS, NB, NF) Tel: (403) 992-6042 (SK, AB, BC) Fax: (905) 565-0161 Email: info@rosenbergcanada.com https://rosenbergcanada.com http://ecfangrid.ca--- About Rosenberg Fans Canada Ltd. ROSENBERG FANS CANADA LTD. has been serving Canadian customers from its headquarters in Mississauga, Ontario since 2005. Customers appreciate the stocking programs, the local technical support and the value-added manufacturing solutions which Rosenberg Canada provides. The company's experienced and knowledgeable staff work with clients to select the best air moving solution for the application. They service many industries including HVAC, Refrigeration, Railways, Renewable Energy, Commercial and Residential appliances, Medical equipment and Telecommunications, to name a few. The Rosenberg Fans Canada Ltd. team works hard to provide professional client services and strives to deliver timely information to help you make informed decisions.

07-09-2021 | Fashion, Lifestyle, Trends
blast personal fan
BLAST PERSONAL FAN REVIEW 2021 {UPDATE} Does Blast Auxiliary Neck Fan Work?
blast Personal Fan (also called blast auxiliary Neck fan) This recently released blast personal fan reviews report explains some important facts that any prospective blast auxiliary neck fan buyer should read before making a purchase choice for this popular blast personal fan in the United States of America. Summer is officially here, and the heat it brings is exceedingly uncomfortable, undesired, and aggravating for everyone. Things may get extremely challenging for
06-23-2021 | Leisure, Entertainment, Miscel …
BLAST AUXILIARY PERSONAL FAN
Blast Auxillary Personal Fan Review: Shocking Truth About The Blast Personal Fan …
Blast Auxiliary Personal Fan is a new technology that has been introduced with the aim of helping people get through the nasty summer heat. According to the official website, this portable cooling fan can be carried anywhere with ease, even outdoors, this is to ensure that you keep your body temperature cool even when it’s boiling outside. Last summer, I was transferred to Arizona to handle a project. It was my
01-15-2021 | Health & Medicine
DivinAir mask fan
DivinAir mask fan Reviews-Does DivinAir Face Mask Fan Work-Complete Info
DivinAir Mask Fan: If you’re something like me, you probably aren’t a massive fan of having to wear face mask all the time. I suggest, I get it, we should all be growing behavior that take the fitness and safety of ourselves and others severely, but wow, I simply certainly don’t like them. They make breathing tough! Breathing must be easy, shouldn’t it? And I locate I frequently sweat underneath my
11-19-2020 | Business, Economy, Finances, B …
Zion Market Research
Global Home Ceiling Fan Market 2020 Business Strategies – Fanimation, Casablan …
The market report titled “U.S. Home Ceiling Fan Market by Type (Decorative, Energy Saver, High Speed, Designed With Light, Four Blade and Others) – U.S. Industry Perspective, Comprehensive Analysis, and Forecast, 2015 – 2021” and published by Zion Market Research will put forth a systematizedevaluation of the vital facets of the global Home Ceiling Fan Market market. The report willfunction as a medium for the better assessment of the existing
01-23-2019 | Industry, Real Estate & Constr …
Research Reports Inc.
Global Home Ceiling Fan Market 2018 |Growth With Top Manufactures: Fanimation, C …
Research Reports Inc added new report ‘Global Home Ceiling Fan Market Growth 2018-2023’which includes market scope, Trends, Research methodology & outlook. The major component of Home Ceiling Fan is mounting hardware, patented EC motor, airfoils, LED mount, patented LED module and lens diffuser. Different types of ceiling fans can be selected depending on the size of the room. There are many types and styles of ceiling fans. Get Sample Copy
08-10-2018 | Advertising, Media Consulting, …
HTF Market Intelligence Consulting Pvt. Ltd.
Explosion-proof Fan Market to Witness Huge Growth by 2025 | Panasonic, Cincinnat …
HTF MI recently introduced Global Explosion-proof Fan Market study with in-depth overview, describing about the Product / Industry Scope and elaborates market outlook and status to 2023. The market Study is segmented by key regions which is accelerating the marketization. At present, the market is developing its presence and some of the key players from the complete study are CCI Thermal Technologies, Elektror, Rosenberg Ventilatoren GmbH, Americraft Manufacturing, Panasonic, Cincinnati
Comments about openPR
OpenPR is clearly structured and remains true to its principle of confining itself to the essential parts. OpenPR has proven to be a very good and reliable partner to our media agency: Within the shortest time the releases are online and go down well with the media representatives. The success of OpenPR is reflected in the steadily increasing number of press releases. It is good that OpenPR exists!
Ursula Koslik, Director Marketing & PR, F+W Hamburg