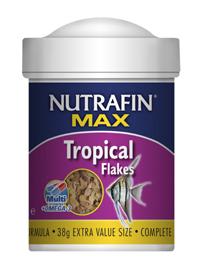 A trial carried out at Sparsholt College National Aquatic Training Centre in Hampshire to establish the nutritional qualities of the UK’s top selling tropical fish foods has concluded that Nutrafin Max made by Hagen Aquatics produced significantly higher growth rates than its two main competitors. The study also showed that fish displayed more vibrancy and utilised the protein in the food more effectively than the other two leading brands tested. The scientifically controlled trial was to test the foods for use in aquariums so it was important to choose a species that would be representative of tropical egg-laying fish. After due consideration Rosy barbs (Barbus conchonius) were chosen as being the most suitable species. How the trial was carried outEach of the three foods was allocated three tanks to triplicate the trial with each tank containing 10 mixed-sex Rosy barbs with an average weight of 14g per tank. The trial was run for nine weeks to allow the average weight of at least one tank to double, to give a valid performance estimate of the foods compared to the best performing one. The fish were fed 3% of their body weight over two feeds, approximately half in the morning and the remaining half in the afternoon. At the end of the trial, a cumulative average from each of the foods’ three tanks was determined, to give the overall performance across the trial period. The test established that fish fed on Nutrafin Max had a significantly higher Specific Growth Rate (SGR) than the other feeds tested.A test was then undertaken to determine the vibrancy of the colours of the fish. First lighting was turned on above the tanks to allow equal viewing conditions in each of the tanks. Thirty people were asked which of the fish in each of the tanks showed a difference in colouration and if the colours were more or less vibrant. Twenty-three people out of the thirty noticed a difference in colouration in the Nutrafin Max tanks all saying that the colours were significantly more vibrant than the fish fed on the other two leading brands.Rolf C. Hagen is the largest independently owned pet supplies company in the world manufacturing a vast range of products for almost every kind of pet.Further editorial information: David Jordan The Words Workshop Ltd 26 Swanwick Lane Broughton Milton Keynes MK10 9LDTel: +44 (0) 1908 695500 Fax: +44 (0)1908 690099 mailto:david@thewordsworkshop.co.uk http://www.thewordsworkshop.co.uk Business enquiries: Rolf C. Hagen (UK) Ltd California Drive Whitwood Industrial Estate Castleford West Yorkshire WF10 5QH Tel: +44 (1977) 55 66 22 Fax: +44 (1977) 51 34 65 http://www.hagen.com mailto: customer.service-uk@rchagen.com

12-20-2011 | Leisure, Entertainment, Miscel …
Rolf C. Hagen (UK) Ltd.
How to House-train Your Puppy
Everyone loves a new puppy but training him to do the things he has to do outside rather than on the living room carpet can be something of a challenge. Here pet product manufacturer Rolf C. Hagen offers some helpful advice to make the process easier for both you and your pet. Dogs learn best by repetition so it’s important to get him into a routine. First decide where
10-19-2011 | Leisure, Entertainment, Miscel …
Rolf C. Hagen (UK) Ltd.
Cats Like Running Water Best
Providing a good supply of fresh clean drinking water for cats is essential for their health and well being. A cat’s body tissue is made up of around 70% water - which is about the same as the prey they would catch in the wild - but for domestic cats, especially those on a diet of dry cat food, extra water is needed to prevent dehydration. Although canned pet
10-12-2011 | Leisure, Entertainment, Miscel …
Rolf C. Hagen (UK) Ltd.
Pet Care Manufacturer Donates to Comic Relief
Over 300 retailers and their guests from Britain’s pet trade enjoyed a two-day mix of business and entertainment, at pet care manufacturer Rolf C. Hagen’s annual exhibition held at the Chesford Grange hotel, Kenilworth, on 4th and 5th of September. After the hectic business dealings of the day a Gala Dinner was held with entertainment from top comedian and Comic Relief founder Lenny Henry. As promised, Hagen donated £5.00
09-12-2011 | Fashion, Lifestyle, Trends
Rolf C. Hagen (UK) Ltd.
Pet care specialist urges dog owners to check their pet’s teeth
Pet care specialist Rolf C. Hagen is urging dog owners to regularly check the condition of their dog’s teeth to help avoid the development of serious dental diseases. Just like humans, dogs need to keep their teeth clean and healthy to keep them in top condition and prevent bad breath. Bacteria resulting from poor dental health can also lead to other medical problems affecting organs including the kidneys and heart,

11-13-2020 | Advertising, Media Consulting, …
GLOBAL INFO RESEARCH
Global Aquarium Pets Foods Market Overview Report by 2020-2025
Global Info Research offers a latest published report on Aquarium Pets Foods Analysis and Forecast 2019-2025 delivering key insights and providing a competitive advantage to clients through a detailed report. This report focuses on the key global Aquarium Pets Foods Concentrate players, to define, describe and analyze the value, market share, market competition landscape, SWOT analysis and development plans in next few years. Click to view the full report TOC, figure
Comments about openPR
Your portal is fast, simple, and easy to use. Others may have more functions but they also demand more editing time, you have to preformat the text in order to achieve a good result etc. I think openPR is really fantastic!
Andreas Knepper, wallmedien AG