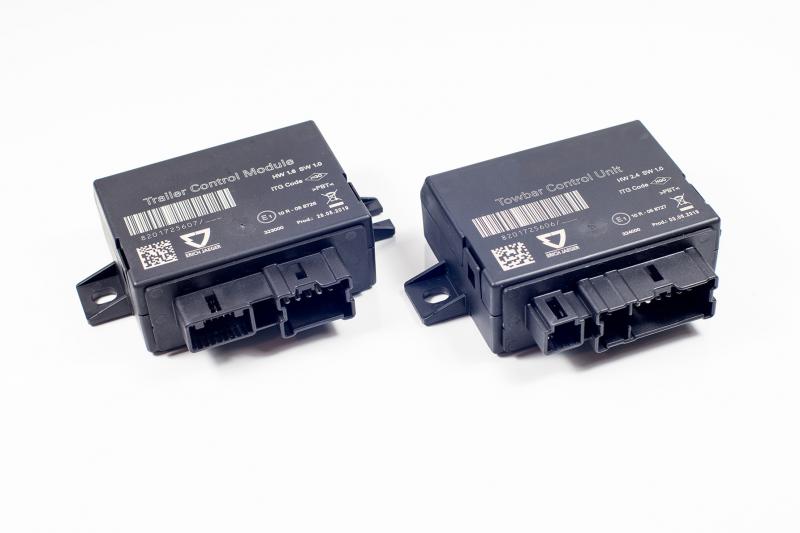 In early October, Erich Jaeger introduced two new control modules for trailer operation for passenger cars with the ordering customer being a well-known car manufacturer. For the first time, Erich Jaeger applied a development process according to the standard ISO 26262 for functional safety of electrical and/or electronic systems in automobiles. The development work resulted in a trailer control module classified as ASIL (Automotive Safety Integrity Level) A and a tow bar control unit for semi electric swiveling tow bars classified as ASIL B. Moreover, the engineers of Erich Jaeger could optimize the products by realizing – for example – a unique hybrid pin header for common 8- and 16-pin connections and a QR-code for the traceability of testing and serial no. of every single module.After a development phase of 18 months, Erich Jaeger could deliver the first units of a new generation of trailer control modules in late September. For the first time, the company developed modules adhering to the ISO standard for functional safety of electrical and/or electronic systems in automobiles (ISO 26262). Thus, Erich Jaeger successfully works on making its products fit for future applications – some car manufacturers already insist on their suppliers to comply to this standard when developing new products. After all, complying to the standard helps to make the complexity of modern vehicle supply systems more manageable and to make road traffic safer.Development according to ISO 26262 and classification according to ASIL For a major car manufacturer, the Erich Jaeger engineers realized a trailer control module and a tow bar control unit for semi electric swiveling tow bars. Complying to the standard ISO 26262, both modules have been classified according to the ASIL classification describing the level of risk reduction required to prevent a specific hazard. The classification is based on a “safe state” which the system has to fall back to in case of an emergency. The trailer control module is classified as ASIL A and the tow bar control unit as ASIL B. The “safe states” which have been defined accordingly help to avoid incidences due to malfunctions of single vehicle components.Product optimizations for housing and electronics In addition to the standardized development, the Erich Jaeger team could implement some further optimizations: As opposed to previous modules, Erich Jaeger used PBT as material for the housing. The application of the robust material improves the structural integrity of the housing along with its resistance against environmental influences.Unique hybrid pin header grants advantages A newly developed and market-wide unique hybrid pin header combines common 16- and 8-pin connections of reputable manufacturers in just one component part. This results in cost advantages, and the force necessary to plug in the connection is reduced to less than 60 N compared to more than 75 N for previous modules. Both the pin header and the printed circuit board (PCB) are fixed within the housing via a guide rail and internal fixation clamps, thus minimizing the risk of damage to these components and avoiding rattling noises.High-end electronic components The PCB features a very low quiescence current of approx. 30 μA; this value is below the value of a maximum 100 μA required by most car manufacturers thus preserving the vehicle’s battery. For manufacturing the PCB, Erich Jaeger can access the services of its associate company Bavaria Digital Technik. The manufacturer applies cost-effective micro components and places a QR-code on PCB and housing enabling customers to retrieve information on serial no. and test documentation for every individual module. This guarantees the traceability of the control modules.Erich Jaeger GmbH + Co. KG Ralf kleine Brörmann Straßheimer Str. 10 D - 61169 Friedberg Tel.: +49 (0) 6031 / 794-258 Fax: +49 (0) 6031 / 794-458 E-mail: broermann@erich-jaeger.de Internet: www.erich-jaeger.comFor more than 90 years, ERICH JAEGER has been developing and manufacturing high-quality connector systems for different branches of industry, particularly the light and commercial vehicle sector. Considering the digitalization, the global market leader for connections between towing vehicle and trailer increasingly develops smart components which play an important functional role to interconnect all automotive systems.

04-23-2019 | Tourism, Cars, Traffic
Erich Jaeger GmbH + Co. KG
Trailer socket „Expert“ – as watertight as can be
With the 13-pin connector system “Expert” for 12V trailer operation, ERICH JAEGER has once again set a standard within this segment: The system is 100% watertight both at the plug and at the vehicle and tested according to the protection classes IPX7 and IPX9K. Therefore, the socket avoids an ingress of water into the vehicle’s electrical system even under extreme conditions like the lowering of a sport boat into the
02-06-2019 | Tourism, Cars, Traffic
Erich Jaeger GmbH + Co. KG
ERICH JAEGER develops data connectors
In the not-so-far future, trailers will face a few new challenges: They will be equipped with cameras and sensors which will transmit signals to the driver conveying information on the vehicle’s environment or and condition. Of course, this requires connections and plugs between towing vehicle and trailer which are able to cope with these digital data. ERICH JAEGER – the expert on trailer connectors – is already working on developing
07-13-2009 | Logistics & Transport
Erich Jaeger GmbH + Co. KG
Simple system for challenging requirements - New lighting system for agricultura …
(Friedberg/Hessen, July 2009). The use of trailers in agriculture makes high demands on the electrical components of the vehicle: On the one hand, they must be extremely sturdy and durable; despite the harsh conditions on the field, the correct functionality of the lighting always has to be guaranteed – be it for the field or for road traffic. On the other hand, it is necessary that the components are easy
05-06-2009 | Logistics & Transport
Erich Jaeger GmbH + Co. KG
F.X. Meiller and Erich Jaeger - Customized cooperation
For more than 100 years, the tipper manufacturer F.X. Meiller has been firmly established in the area of vehicle construction and has been known for high-quality tipper bodies and tipping trailers. Within the last few of these years, the automotive supplier Erich Jaeger has built up a close developmental cooperation with the company from Munich, supplying it with many different products, from connectors to complex cable systems and complete lighting