Trailer socket „Expert“ – as watertight as can be 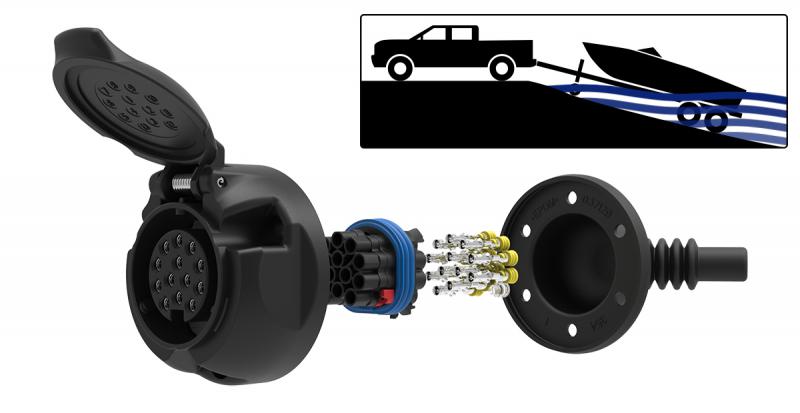 The 13-pin trailer socket is 100% watertight

With the 13-pin connector system “Expert” for 12V trailer operation, ERICH JAEGER has once again set a standard within this segment: The system is 100% watertight both at the plug and at the vehicle and tested according to the protection classes IPX7 and IPX9K. Therefore, the socket avoids an ingress of water into the vehicle’s electrical system even under extreme conditions like the lowering of a sport boat into the water.Features of the watertight trailer socket ERICH JAEGER’s engineers achieved this by developing a double contact system. Facing the vehicle, the tightness is ensured by contact sleeves with single wire seals and a stuff plug – supported by a contact insert with circumferential seal. Facing the plug, the contact installation seals the socket housing. As an option, the socket is available with a sealed non-contact switch facing the connector.Trailer identification via the vehicle electrical system or the socket Mostly, a control device measures the load at the socket thus being able to detect whether a trailer is plugged in or not. However, if an adapter is plugged in without a trailer, the electronic identification does not work due to the missing trailer load. Therefore, the vehicle system does not prevent the swinging out of an electric tow bar – which may damage adapter and socket. Besides, some vehicles do not include such on-board electronics or the user demands an additional possibility for trailer identification.For the identification working reliably for all applications, Erich Jaeger offers the option to equip the socket with a switch. As soon as an adapter or plug is plugged into a socket, the switch transmits a respective signal to the vehicle. Of course, such a switch may not influence the watertightness.Reed switch ensures watertightness ERICH JAEGER found a solution for these applications: The company offers the 13-pin 12V socket with a non-contact switch (reed switch) as an option. The switch is activated via a magnet enclosed in a flexible rubber seal within the socket housing. In case a user inserts an adapter or a plug, the magnet within the rubber seal is pushed towards the switch and activates it. Due to the contactless switch activation, there is not outlet necessary within the socket and the watertightness is guaranteed.The company For more than 90 years, ERICH JAEGER has been developing and manufacturing high-quality connector systems for different branches of industry, particularly the light and commercial vehicle sector. Considering the digitalization, the global market leader for connections between towing vehicle and trailer increasingly develops smart components which play an important functional role to interconnect all automotive systems.Erich Jaeger GmbH + Co. KG Ralf kleine Brörmann Straßheimer Str. 10 D - 61169 Friedberg Phone: +49 (0) 6031 / 794-258 Fax: +49 (0) 6031 / 794-458 E-mail: broermann@erich-jaeger.de Internet: www.erich-jaeger.com

11-12-2019 | Tourism, Cars, Traffic
Erich Jaeger GmbH + Co. KG
New control modules for trailers and swiveling tow bars according to ISO 26262
In early October, Erich Jaeger introduced two new control modules for trailer operation for passenger cars with the ordering customer being a well-known car manufacturer. For the first time, Erich Jaeger applied a development process according to the standard ISO 26262 for functional safety of electrical and/or electronic systems in automobiles. The development work resulted in a trailer control module classified as ASIL (Automotive Safety Integrity Level) A and a
02-06-2019 | Tourism, Cars, Traffic
Erich Jaeger GmbH + Co. KG
ERICH JAEGER develops data connectors
In the not-so-far future, trailers will face a few new challenges: They will be equipped with cameras and sensors which will transmit signals to the driver conveying information on the vehicle’s environment or and condition. Of course, this requires connections and plugs between towing vehicle and trailer which are able to cope with these digital data. ERICH JAEGER – the expert on trailer connectors – is already working on developing
07-13-2009 | Logistics & Transport
Erich Jaeger GmbH + Co. KG
Simple system for challenging requirements - New lighting system for agricultura …
(Friedberg/Hessen, July 2009). The use of trailers in agriculture makes high demands on the electrical components of the vehicle: On the one hand, they must be extremely sturdy and durable; despite the harsh conditions on the field, the correct functionality of the lighting always has to be guaranteed – be it for the field or for road traffic. On the other hand, it is necessary that the components are easy
05-06-2009 | Logistics & Transport
Erich Jaeger GmbH + Co. KG
F.X. Meiller and Erich Jaeger - Customized cooperation
For more than 100 years, the tipper manufacturer F.X. Meiller has been firmly established in the area of vehicle construction and has been known for high-quality tipper bodies and tipping trailers. Within the last few of these years, the automotive supplier Erich Jaeger has built up a close developmental cooperation with the company from Munich, supplying it with many different products, from connectors to complex cable systems and complete lighting