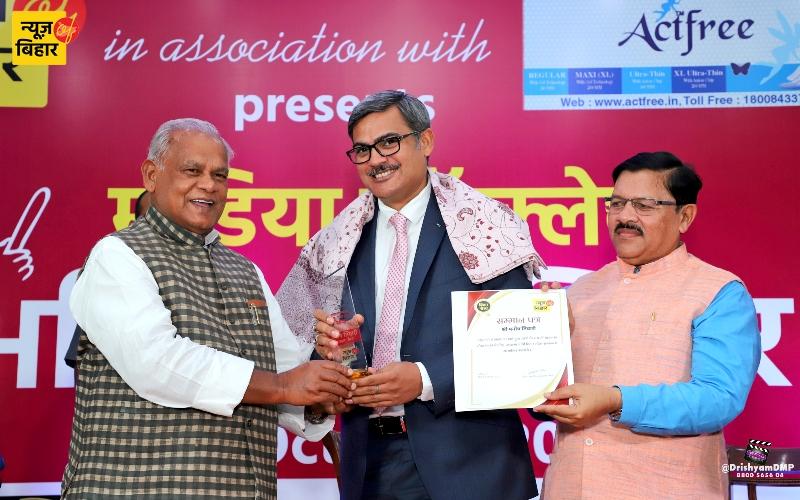 Hard work pays off at last for Mr. Tiwary. He was bestowed upon the Bihar Gaurav Samman in the Young Entrepreneur category.Coming from a small town in Bihar, India, it takes great courage & gut to run your bootstrapped business in an industry where exists a huge competition. Such is the story of Mr. Manish Tiwary. After completing his bachelor’s degree from Bhagalpur in Bihar, he went ahead to pursue Masters in a subject which was and is very near to his heart, Travel. There was always this entrepreneur in him which kept pushing him to start something on his own. And finally, after working in different related companies in various capacities, he started Vertex in 2012.As is the case with the bootstrapped start-ups, he also faced difficulties in the beginning. Right from having a proper place to run the operations, acquiring the clients, getting the repeat business till arranging the finances. But as the saying goes, where there is will, there is a way! He kept on pushing the limits and never let any obstacle to stop him in achieving his dreams. As a result, after 7 years of hard work, his work got noticed. Last month, on the 150th birth anniversary of Mahatma Gandhi, he received the Bihar Gaurav Samman at a conclave held at the Constitution Club of India, New Delhi. He got this award from the Ex-Chief Minister of Bihar, Mr. Jitan Ram Manjhi and the Vice President of Bhartiya Janta Party (the ruling party at the centre in Indian Politics).After receiving the award, Mr. Tiwary reflected on all the labour and things to come by in the future. His company is going to focus more towards MICE (Meetings, Incentives, Conferences, Events/ Exhibitions) segment. Looking at the growing need of training at various levels, Vertex will also come up with some innovative programs in near future. He is also working towards providing tailor made travelling packages for schools across the country. “It has been a satisfying experience so far but there is a lot more to be done and achieved. I will strive for the same and try to return to the society in general and my beloved home state Bihar in Particular.” Mr. Tiwary Signed off.80/40 B, Malviya Nagar, New Delhi, India-110017Vertex Holiday is an ISO 9001:2015 certified company, based out of India, dealing in MICE as well as INBOUND & OUTBOUND Tour packages across the world. They deal in- Holiday Packages, Inbound Travel, Outbound Travel, MICE, Meetings, Conferences, Exhibitions, Incentives, Wildlife Tours, Devotional tours, Spiritual Tours, Trekking Trips, Honeymoon Packages, Summer Packages, Monsoon Packages, Winter Packages, Adventure tourism, Bharat Darshan, Educational Trips, Day Programs at Schools etc.

03-31-2017 | Advertising, Media Consulting, …
Employment Express
Bihar Public Service Commission (BPSC) Recruitment 2017 For 1065 Assistant Engin …
Bihar Public Service Commission (BPSC) has released a recruitment notification and invites the applications for For 1065 Assistant Engineer in Bihar. All eligible candidates can apply before 07 April 2017 Find Details Of the Job: https://goo.gl/info/oz65GU Job Details : Post Name : Assistant Engineer No of Vacancy : 1065 Posts Pay Scale : Rs. 9300-34800/- Grade Pay : Rs. 5400/- No of Vacancies Civil : 969 Posts Mechanical : 96 Posts Nationality : Indian Educational Qualification: Candidates must have completed BE/B.Tech
11-14-2016 | Fashion, Lifestyle, Trends
Zorba Books
From Katihar, Bihar Emerges A Teenage Boy Who Will be a Writing Sensation
13th November’16 Katihar Bihar, will witness the rise of a young, sensitive, observant author with great facility with words. The 5 Blunder, Mistakes of His Life by Divyanshu Parashar published by Zorba Books. Gurgaon, New Delhi, November 14, 2016 -- 13th November’16, will see the launch of The 5 Blunder Mistakes of His Life by Divyanshu Parashar witnessed by the who’s who of Katihar. One would be sure that that a
10-04-2016 | Industry, Real Estate & Constr …
Kamdhenu Organised Bihar Dealer’s Meet in Agra
Kamdhenu Limited is poised to move forward with smart city project in Bihar
Patna: Kamdhenu Limited has organized a dealer’s meet at Hotel J. P. Palace in Agra, with the objective to motivate the Kamdhenu Dealers from Bihar in view of impending development in Bihar under Smart City Project. This Dealer’s Meet was attended by more than 350 Kamdhenu dealers from Bihar. In the spirit of lending support to the infrastructural development, the speakers of Company have given useful tips regarding growth and
09-19-2013 | Media & Telecommunications
Uninor India
With UP West and Bihar & Jharkhand, Uninor achieves break-even in five of its si …
~Company announces break-even in two more circles. On track to achieve pan-India breakeven within calendar 2013. Sabse Sasta tariffs to continue~ New Delhi, September 19, 2013: Resulting from its lower costs per minute (upto 40% lower) and sabse sasta tariffs (upto 60% cheaper) Uninor has achieved its financial break-even in the two circles of UP West and Bihar (and Jharkhand). With this, five out of Uninor’s six operating circles have
02-05-2013 | Arts & Culture
Bodh Mahotsava
Bihar Tourism Launches annual festival Bodh Mahotsava
Bihar Tourism and District Administration, Gaya announces Bodh Mahotsava to be inaugurated by Shri Nitish Kumar, Hon'ble Chief Minister, Bihar at 5:30 pm on February 6th, 2013 at Kalachakra Maidan. The festival will have esteemed Chief Guest Shri Sushil Kumar Modi, Hon'ble Dy. Chief Minister, Bihar Presided by Shri Sunil Kumar Pintoo, Hon’ble Minister, Dept. of Tourism, Govt. of Bihar and Special Guests Shri Uday Narain Choudhary, Hon’ble Speaker, Bihar
02-01-2012 | Health & Medicine
Dharamshila Hospital and Research Centre
Dharamshila Hospital start its Cancer OPD in Patna, Bihar at Ford Hospital to ca …
New Delhi, Feburary 1, 2012 Dharamshila Hospital And Research Centre, India’s first and only NABH accredited Cancer Hospital, going to start its Cancer OPD in Bihar at Ford Hospital And Research Centre, Patna on 4th and 5th Feburary 2012. Bihar has recorded an alarming rise in the incidence of cancer with an estimated 200,000 people suffering from this killer disease. Lack of awareness among the people about the disease coupled
Comments about openPR
OpenPR is clearly structured and remains true to its principle of confining itself to the essential parts. OpenPR has proven to be a very good and reliable partner to our media agency: Within the shortest time the releases are online and go down well with the media representatives. The success of OpenPR is reflected in the steadily increasing number of press releases. It is good that OpenPR exists!
Ursula Koslik, Director Marketing & PR, F+W Hamburg