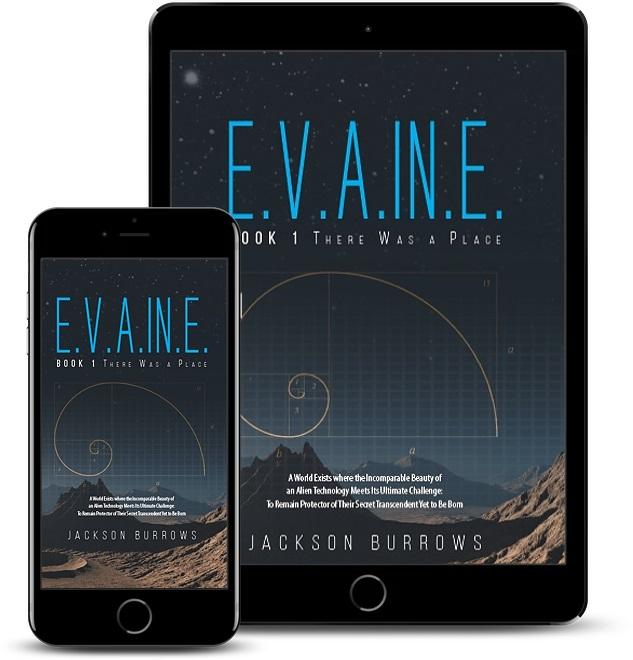 Author Jackson Burrows Promotes His Sci-fi Horror Romance - E.V.A.IN.E.: Book 1 There Was a PlaceAuthor Jackson Burrows is pleased to announce the promotion of his sci-fi, horror romance, E.V.A.IN.E.: Book 1 There Was a Place.A world exists where the Incomparable Beauty of an Alien Technology Meets Its Ultimate Challenge: To remain Protector of Their Secret Transcendent Yet to Be Born.Set within their spiral galaxy, between the expanse waves of Mira and Axis Prime, an exploring society called Deneva has created the answer to a harmonious continuance in the universe. One citizen of remarkable insight and intelligence, Dr. Shesgal Ollemanhalu, has created a transferable, virtual representative from his doctorate work in the natural world to aid his people in establishing the natural development of genesis in order to save his race. He name his virtual creation, E.V.A.IN.E. She is the carryover of Shesgal's doctorate breakthrough in behavioral progression that leads to transcendence. The revelation which was meant only for his world becomes Shesgal's remarkable change to life in the universe. It is known by the greater name of E.V.A.IN.E. World Foundation. In the search for fulfillment beyond their own survival, others, along with Shesgal would develop nature's greatest creation; a super being of transcendent capability who can lead them all into their place of higher belief in the universe.E.V.A.IN.E.: Book 1 There Was a Place is available for purchase in print and ebook formats. Book Details: E.V.A.IN.E.: Book 1 There Was a Place By Jackson Burrows Publisher: Page Publishing ISBN: 978-1684090525 (pb) ISBN: 978-1684090549 (hc) ASIN: B01M66TDE9 Pages: 505 Genre: Horror Romance, Science FictionAbout the Author: Jackson Burrows currently lives in Deep South Texas along the perimeter of the Rio Grande. Earlier in Life, he worked in many occupations ranging from an agricultural tree farmer to a gravedigger at a cemetery. During the Vietnam conflict, he was drafted from Oklahoma State University during his sophomore year through the 'lottery system' developed by the Nixon administration to fill up the ranks for the already lost war. After serving in the USCG search and rescue detachment, he rode the deep sea ships of the merchant marine. In 1981, he became an emergency services personnel and eventually completed his employment of twenty five years as a fire captain and emergency medial tech. He is now retired and has completed the first book of his novel he developed those many years ago when he attended OSU.Contact: Publishers Website: http://www.pagepublishing.com/books/?book=evaine-book-1-there-was-a-place Promo Link: http://bookbuzz.net/blog/horror-romance-e-v-a-in-e-book-1-there-was-a-place/Purchase Links: https://www.amazon.com/V-Book-There-Place-ebook/dp/B01M66TDE9 https://www.barnesandnoble.com/w/evaine-jackson-burrows/1124675086?ean=9781684090525 https://books.apple.com/us/book/e-v-a-in-e-book-1-there-was-a-place/id1167643750 https://www.indiebound.org/book/9781684090525BookBuzz.net 59 Heritage Way Drive Rome, GA 30165Website: https://bookbuzz.net/blog/horror-romance-e-v-a-in-e-book-1-there-was-a-place/BookBuzz.net helps indie authors, hybrid authors, and small publishers promote and market their books. We also help with book reviews, publicity, and more. Let's Create Some Buzz For Your Book!!!

You can edit or delete your press release Author Jackson Burrows Promotes His Sci-fi Horror Romance - E.V.A.IN.E.: Book 1 There Was a Place here

01-25-2018 | Media & Telecommunications
KKN
The Best Self Help Book
The Self Help Book By Kris Kourtis. The Self Help Book is an Audio Book that provides real solutions to altering your life for the better. Kris Kourtis uncovers the real secrets to life. You will be able to change an are of your life that needs changing . From zero to hero. Lose weight Get Rich. Develop great intuition Find your gift. This is not a book of rules but rather an awakening Book
10-21-2016 | Advertising, Media Consulting, …
Still Beautiful The Color of Beauty
Great New Book
Still Beautiful “The Color of Beauty”: Powerful New Book of Poetry Spans Life’s Journey; Written as a ‘Companion’ for those Reaching Out to God & Loved Ones. It’s a window into a past that’s still with us today Written from the heart and experiences of Kevin Bates, ‘Still Beautiful’ fuses fun, family love, spiritual, emotional and thought-provoking poetry to guide readers through life’s triumphs and defeats. Built into three compelling sections, every
04-29-2011 | Arts & Culture
Black Hills Publications
The Whiskey Boys Book Release
Black Hills Publications: We are pleased to announce the publication of The Whiskey Boys by Jacqualyn Simmons. Charleston, South Carolina, United States of American April 28, 2011 -- A local native of Johns Island published “The Whiskey Boys”, a condensed collaboration about the events surrounding the whiskey insurrection commonly known as the whiskey rebellion. This book is a brief riveting account of heroism illustrated by President George Washington’s historical march
01-03-2011 | Politics, Law & Society
Ze'ev Shemer
Featured Book
FOR IMMEDIATE RELEASE Featured Book: ISRAEL AND THE PALESTINIAN NIGHTMARE By Ze’ev Shemer Published on December, 2010 iUniverse Publishing January 1st 2011 Israel and the Palestinian nightmare is not only a reliable reference book; it is a captivating description and review of the Arab-Israeli conflict. It offers an honest account of where Israel went wrong, covers facts relating to the origins of the nation of Israel and the profound effect that history has had
11-26-2010 | Associations & Organizations
Black Hills Publication
New Book Release
FOR IMMEDIATE RELEASE: November 25, 2010 Black Hills Publications We are pleased to announce the Publication of Missing Papa by Jacqualyn Simmons. Charleston, South Carolina, November 24, 2010 – A local native of Johns Island has published “Missing Papa”, a short story elaborating about the events on the Simmons family local farm. This book is a captivating short story and illustration about farm life on Johns Island in South Carolina. The author narrates about
08-25-2009 | IT, New Media & Software
FotoInsight Ltd.
FotoInsight's New Photo Paper Book Makes Book Bulge Disappear
Today FotoInsight launches a new version of FotoInsight Designer with new lines of photo albums on photographic paper, new features like fading frames and festive templates and the addition of Linux and Mac OS versions. Cambridge, 20 August 2009. - Europe's most popular photo book software is now also available for Linux and Mac OS. Against an ever growing number of photo book services, FotoInsight is increasing its technological lead with the
Comments about openPR
Your portal is fast, simple, and easy to use. Others may have more functions but they also demand more editing time, you have to preformat the text in order to achieve a good result etc. I think openPR is really fantastic!
Andreas Knepper, wallmedien AG