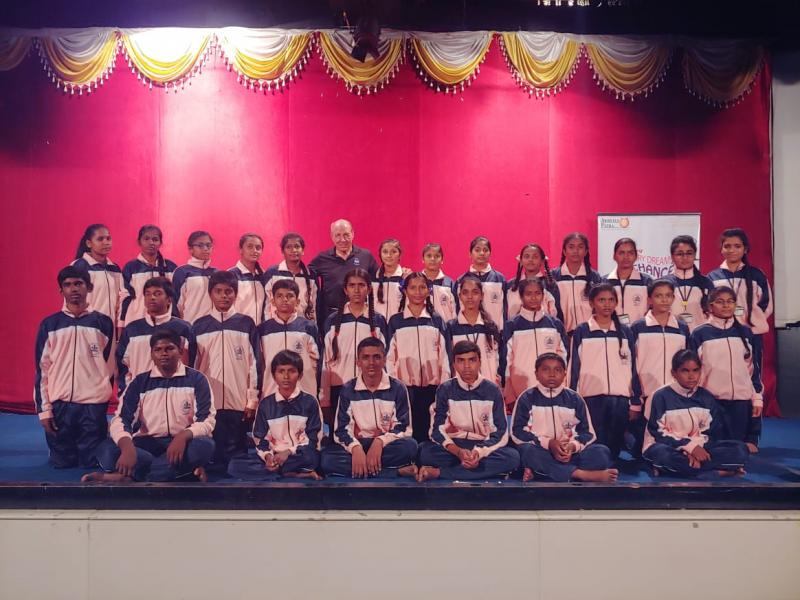 The Akshaya Patra Foundation organised Space Talk, an interactive session with the former engineer at the Kennedy Space Center for NASA, George ‘Gabe’ Gabrielle for its beneficiaries in Bengaluru, Karnataka. It was aimed at providing children exposure to space education and opportunities and attended by 200 enthusiastic children from GHS Peenya and GHS Bagalgunte.A former engineer at the Kennedy Space Center for NASA, Gabe visits schools to talk to students on the Space programme and inspire them. In this context, his efforts are in line with Akshaya Patra’s Giving Every Dream a Chance initiative, a mentorship programme to inspire children to pursue their dreams and passion. Gabe has previously served as the Director of Engineering for the US Air Force’s Special Operations Command.In his two-hour-long session in Bengaluru, Gabe encouraged children to pursue their dreams by sharing anecdotes from his personal life and his tenure at NASA. He also spoke about life in NASA, a typical day at the International Space Station (ISS), the future of Mars exploration, among other things. On the eve of the interaction, Gabe said, “I think children are magical; they have a great imagination and a great desire to learn. These children should get a chance to live their dreams and Akshaya Patra, through Giving Every Dream a Chance programme, is giving them this chance. I really appreciate Akshaya Patra for supporting these children.” After the session, he spent an hour interacting with enthused children and motivated them.The event was held in association with the Society for Space Education and Research Development (SSERD), a Bengaluru-based NGO which aims to ignite interest in space among students through its interactive programmes on the subject. 316 Akshaya Patra beneficiaries have enrolled under SSERD programme for the academic year 2019-20 as a part of the Giving Every Dream a Chance initiative—one of the several programmes launched by Akshaya Patra under the umbrella term National Endeavour for Student Transformation (NEST).On the eve of this event, Nikhitha C., the CEO and co-founder of SSERD, said, “2 decades ago, we were introduced to computer science fundamentals at the primary schooling, because it was the start of the IT revolution and it was necessary to learn about it. Now, we at SSERD believe that every student should know about space at a basic level to be part of Space Revolution which has started. They need to understand how space is going to benefit them in their day-to-day lives, what are the different career options in Space, challenges that we are facing in space and on Earth, and how can we solve them using Space Technology.” She further added, “SSERD wishes to teach Space at school level and Akshaya Patra has been supporting us to do so through Giving Every Dream a Chance programme.”Thanking Gabe Gabrielle for associating with the Foundation, Shri Chanchalapathi Dasa, Vice Chairman – The Akshaya Patra Foundation, said, “We are immensely grateful to Mr Gabe Gabrielle for talking to our beneficiary children, sharing his experiences, and encouraging them to pursue a career in space science. Many of these children dream of a career in space exploration. Mr Gabrielle’s words of wisdom would have inspired them in their pursuit. We are also thankful to Ms Nikhitha and SSERD for helping us nurture the dreams of our beneficiary children.” He also thanked the Ministry of Human Resource Development (MHRD), Government of India, and the Government of Karnataka for providing Akshaya Patra the opportunity to serve the children and support their dreams.About SSERDSociety for Space Education Research and Development (SSERD) is a community committed to elevate and foster the education of space and research universally. It was co-founded by Nikhitha C and Sujay Sreedhar. As a body, it emphasizes on providing an innovative and exciting hands-on astronomy education. It is intriguing as well as a salient subject for the young generation.In order to accomplish our motives, we have collaborated to innumerable like-minded organizations across the world. With this, we foresee a world with a command on the unexplored celestial bodies and planets. We strive to make astronomical education a lot more accessible. SSERD is one of the few independent organisations in the country in space education sector.The Akshaya Patra Foundation #72, 3rd Floor, 3rd Main Road, 1st & 2nd Stage Yeshwantpur Industrial Suburb, Rajajinagar Ward No. 10 Bengaluru – IndiaAbout GIVING EVERY DREAM A CHANCEWe believe that every child has a dream and each dream is valid. We harbour the principle to promote these dreams and provide the right path to the child to achieve that dream. A flagship initiative designed and implemented by The Akshaya Patra Foundation to nurture beneficiary children with uncommon dreams. The programme helps to provide exposure to various career opportunities for the beneficiaries. Through this mentorship initiative, children are being provided training in music, theatre, sports, robotics, and space education.

07-02-2020 | Industry, Real Estate & Constr …
Diversitech
JOSH HANNAH APPOINTED NEW MANAGING DIRECTOR AT DIVERSITECH
MONTREAL, QC – Diversitech is pleased to announce the appointment of Josh Hannah as its new Managing Director, effective Wednesday, July 1, 2020. Josh will remain the President of Absolent Americas, and brings with him a wealth of knowledge and experience in the industrial air filtration industry. Josh holds an Executive MBA from Xavier University, and a Bachelor of Science in Chemical Engineering from the University of Cincinnati. Prior to his
02-13-2018 | Leisure, Entertainment, Miscel …
Music Promotion Club
‘Full Phenomenon’-Eclectic Hip Hop Single by Thegaberoland
Music is the way of live for many artists and enthusiast. This universal art form has changed the lives of numerous folks. In this respect one music genre that is worthy to be mentioned is hip hop and rap music, the one vibrant genre that has given a new identity to the music industry. The genre has gained impetus right from the beginning but with the coming up of SoundCloud
04-08-2016 | Leisure, Entertainment, Miscel …
Black Dog Promotions
DUUL Brings the Excitement of Live eSports with Launch of Online Social Tourname …
Company to host launch event April 21st in Tempe, AZ Tempe, AZ, April 07,2016 - DUUL is a leading eSports company headquartered in Tempe, AZ. The online eSports platform at http://DUULNow.com offers a social tournament platform where gamers of all ability levels have the opportunity to put their talents to the test and play for real cash and prizes in head-to-head matchups and tournament style competitions. Advertisers looking to reach the
02-27-2013 | Industry, Real Estate & Constr …
RE/MAX Platinum Realty
Dianne Anderson, Gail Grimley and Gabe Hartmann Join RE/MAX Platinum Realty in t …
SARASOTA, FL – Dianne Anderson, Gail Grimley and Gabriel “Gabe” Hartmann have joined RE/MAX Platinum Realty’s Sarasota office. Realtor Dianne Anderson is a 30-year resident of Sarasota and offers extensive knowledge of the area and the Florida lifestyle. Born in London, England, and raised in Orlando, Florida, she obtained her bachelor’s degree from Furman University in Greenville, South Carolina. She began her career as a financial advisor/broker, helping clients protect
05-06-2009 | Media & Telecommunications
Richard Azurdia, Inc.
Richard Azurdia Co-Stars in the Urban/Sci-Fi Film GB2525, to Premiere in Los Ang …
Richard Azurdia co-stars in the Urban/Sci-Fi GB2525, which will have its Los Angeles premiere by opening the 6th Annual Reel Rasquache Film Festival-Reel Visions, Friday May 15, 2009. “Outstanding performances by Frank Alvarez (Sup) and Richard Azurdia (Puppet) cap off an outstanding ensemble of soon to be discovered actors.” Robert Aguilar Jr. - San Diego Examiner ABOUT GB2525 In the dark, urban landscape of the future, a two-year gang truce is shattered when
02-25-2009 | Sports
BMW Tennis Championship
BMW Tennis Championship Announces Jack Heilig as Event PR Consultant
Sunrise, FL -- The BMW Tennis Championship has hired veteran sports publicity and entertainment promotions specialist, Jack Heilig, as its event public relations consultant. The tennis event seeks to capitalize on its ability to attract top 20 ranked players and the best up-and-coming talent from the Association of Tennis Professional (ATP) ranks. "As the BMW Tennis Championship strives to continue to elevate its event status, I feel it
Comments about openPR
OpenPR is clearly structured and remains true to its principle of confining itself to the essential parts. OpenPR has proven to be a very good and reliable partner to our media agency: Within the shortest time the releases are online and go down well with the media representatives. The success of OpenPR is reflected in the steadily increasing number of press releases. It is good that OpenPR exists!
Ursula Koslik, Director Marketing & PR, F+W Hamburg