Press release from: Other Edition 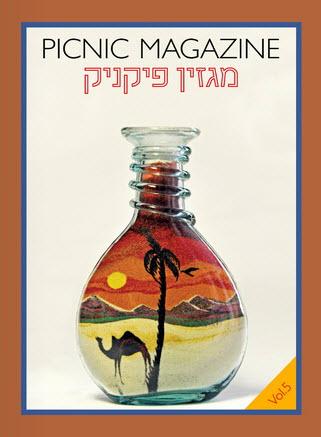 Picnic is an Israeli magazine, published bilingually in both English and Hebrew. The magazine is totally image based so the languages are somewhat irrelevant. The magazine covers everything that is relevant to art, fashion and popular culture. Picnic magazine describes itself as “a visual guide to your new reality”. It is basically a collated collection of images printed in a glossy format: images turned into collectible items. The question arises that how much of a guide it can be to reality and whose reality it refers to. The magazine has a feeling of an art catalogue without curators’ expert opinions or articles. One’s feeling of picnic magazine depends entirely on how one reacts to the images in the magazines. Picnic magazine is a title that lives on the response of its viewers and whether they connect with its views. The magazine can be defined as one loosely on he the theory of postmodernism. The fifth issue of Picnic magazine is now available as digital magazine on Other Edition newsstand. The approach to images in this issue is such that it cannot be easily described in words. Words can only perform its series of purposes such as description of abstracts. Words run the risk of being forced into the role of evaluation or qualitative response. This is the problem as not assuming oneself in the role of a mediator, how can one build a reaction to a totally visual magazine that is fair or balanced? Our reactions and responses to images are more or less very personal and very different the responses we give in the form of words or language. Our responses to life are far more pure in images than words. In this sense the fifth issue of Picnic magazine creates a pictorial journey to which we must respond in our own ways. Desert, water, art, design, utopia and modernism are some of the subjects to be felt in this issue. But, the real object of the issue is what we make of it emotionally and intellectually.Issue Available at: http://www.otheredition.com/PicnicOther Edition is the leading developer of iPad magazines and digital magazine experiences - working with publishers and titles in over 20 countries and with brands to create great experiences for digital and mobile audiences. For more information, visit http://www.otheredition.com/Other Edition, 80 Park Lane, London W1K 7TR T: +44 (0)20 3440 2754 F: +44 (0)20 3440 2701

More Releases from Other Edition

10-18-2011 | Fashion, Lifestyle, Trends
Other Edition
Bon Magazine Spring – summer issue 2011 by Other Edition Newsstand
Bon has established itself as Sweden’s leading international fashion and culture magazine. Bon’s Spring-summer is a cool and calm affair, marked out in seasonal pastels and chilled tones. There is a conceptual attempt to create a kind of cohesion in the fashion coverage by arranging the entire fashion stories one after each other, connecting them with text as if each were part of a single discussion, a long fashion essay
10-13-2011 | Fashion, Lifestyle, Trends
Other Edition
V Magazine – the Heroes issues by Other Edition Newsstand
V Magazine started in 1999.Originally meant as a more accessible bimonthly sister title to the famed limited edition Visionaire, set up at the beginning of the 1990s by Stephen Gan, James Kaliardos and Cecilia Dean. V Magazine devotes its all-important September address to the theme of heroes and proceeds to elicit nominations for the accolade from the great and the glorious. Everyone from Drew Barrymore and Yoko Ono to Missy Elliott
10-07-2011 | Fashion, Lifestyle, Trends
Other Edition
Fantom Magazine - issue 07
Fantom is published out of Milan and is edited by Cay Sophie Rabinowitz and Selva Barni – based in New York and Milan respectively- and is a quarterly photographic magazine that profiles some of the most interesting offerings from the international photography scene today. Its focus is mainly on art photography and visual artists who use photography. But, it’s certainly not limited to that. The alchemy of chemical and light
07-25-2011 | Fashion, Lifestyle, Trends
Other Edition
Other Edition Presents Dansk Magazine - Spring/Summer 2011
Dansk is a Danish magazine that went through several trials and trials since its arrival as one of those titles pursuing to provide a platform for a particular national innovative talent in the international scene. These days it is undoubtedly the most acclaimed Danish fashion magazine and plays a significant role in Scandinavian fashion and design media industry. With occasional brief forays into other disciplines Dansk is almost exclusively a

10-11-2018 | Advertising, Media Consulting, …
HTF Market Intelligence Consulting Pvt. Ltd.
Charcoal BBQ Market to Witness Huge Growth by 2023 | Key Players: Medina River, …
A new research study from HTF MI with title China Charcoal BBQ Market Research Report 2017 provides an in-depth assessment of the Charcoal BBQ including key market trends, upcoming technologies, industry drivers, challenges, regulatory policies, key players company profiles and strategies. The research study provides forecasts for Charcoal BBQ investments till 2022. Access Sample Copy @: https://www.htfmarketreport.com/sample-report/833671-china-charcoal-bbq-market If you are involved in the Charcoal BBQ industry or intend to be, then this
10-02-2018 | Advertising, Media Consulting, …
Grill Accessories Market
Grill Accessories Market 2018 Traeger, Weber, FANMATS, Picnic Time
Global Grill Accessories market 2018 by ReportsQuest presents a professional and complete analysis of on the current Industry situation. The Global report includes Grill Accessories Revenue, market Share, industry volume, Trends, Growth aspects. It analyses the important factors of the based on present industry situations, demands, business strategies utilized by Grill Accessories market players and the future prospects from various angles in detail. Industry analysis is a assessment tool used
03-06-2018 | Advertising, Media Consulting, …
QY Research Store
March 6, 2018: Steak Knives Market Demand 2018-2025 BergHOFF, Picnic Time, Melan …
A market study "Global Steak Knives Market" examines the performance of the Steak Knives market 2018. It encloses an in-depth Research of the Steak Knives market state and the competitive landscape globally. This report analyzes the potential of Steak Knives market in the present and the future prospects from various angles in detail. The Global Steak Knives Market 2018 report includes Steak Knives market Revenue, market Share, Steak Knives industry volume,
07-11-2017 | Health & Medicine
Envolve
Plan Your Way to a Perfect Picnic - National Picnic Month (July)
Picnic season offers many opportunities for some fun in the sun. To protect against food bacteria and possible sickness, it’s important to follow simple food guidelines when preparing and serving dishes. The health experts at Envolve, an integrated healthcare solutions company, are pleased to share a few tips to help you keep your food – and family – safe when enjoying an outdoor meal. 1. Plan Ahead. Thinking beforehand can
07-11-2017 | Fashion, Lifestyle, Trends
Worldwide Industry
Global Cutting Boards Market 2017 : MR Direct, Madeira, Mario Batali, Ukinox, Vi …
Top Manufacture Analysis Of Cutting Boards Market 2017 Includes Market outline, section by Application, Market by Region and Production, Revenue (Value), worth Trend by kind. The Markets And analysis study delivers necessary information and realistic data of the globe Cutting Boards market. The report presents a deep study of the market growth factors and drivers. In-depth analysis of the Cutting Boards Market limitations and thus the opportunities modify the user
07-01-2009 | Tourism, Cars, Traffic
Swissotel The Howard London
“PICNIC IN THE SKY” AT SWISSOTEL THE HOWARD, LONDON
LONDON, June 2009 - Summer is going to be a scorcher and what better way to make the most of it than having a picnic. Swissôtel The Howard, London is launching the ‘Picnic in the sky’ package where guests can indulge in a private picnic on one of our 9th floor Terrace Suites and view all the iconic landmarks along the length of the river Thames from the Houses of
Comments about openPR
9 o'clock: discuss press release with client, 10 o'clock: submit release to openPR, within the briefest possible time release is published and displayed in a prominent place on openPR.de. I am thrilled!
Zehra Spindler, Calypso Now! - Communication Agency