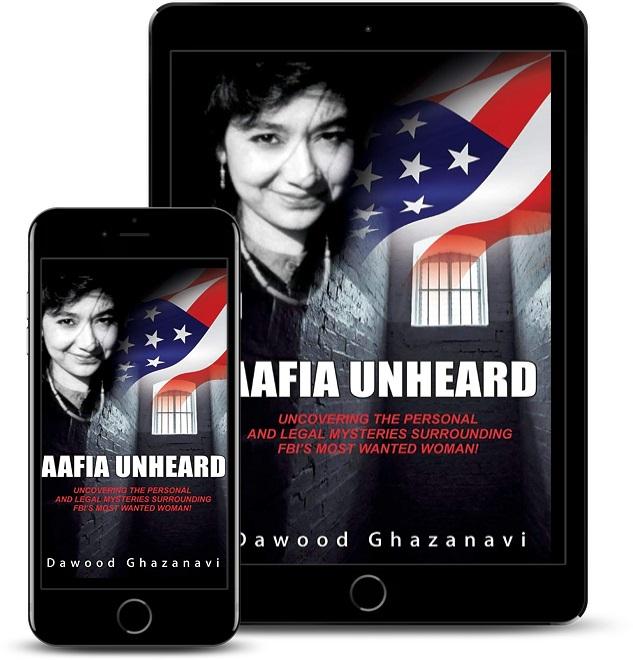 Barrister Dawood Ghazanavi Releases New Book - Aafia UnheardBarrister Dawood Ghazanavi is pleased to announce the release of his new book, Aafia Unheard: Uncovering the Personal and Legal Mysteries Surrounding FBI's Most Wanted Woman. Scheduled for release by BookBaby on October 24, 2019, the book is already receiving rave reviews from readers and reviewers. Aafia Unheard is a non-fiction book covering the life story of a brilliant minded young Pakistani woman, an MIT graduate, and a mother, who found herself being the focus of a case which continues to serve as an example for the war on terror in response to 9/11.Many prisoners today from the war on terror era are making international headlines, such as the recent release of John Walker Lindh. Aafia Siddiqui is another such high profile case which has international appeal and much from the trial and her life between the years 2003-2008 remains a mystery.The author who is a Supreme court attorney in Pakistan, fought Aafia's repatriation case in the Supreme Court of Pakistan with the belief that keeping Aafia in US prison is increasing the prospect of extremism in the Muslim world. The author also believes that since the America / Taliban peace process is underway, Aafia's repatriation under condition for peaceful means, as a peace agent, can help Pakistan to counter terrorist ideologies and can help end Aafia being used by terrorist organizations for their own personal gain. This suggestion has been given while considering Dr. Aafia's educational background, experience developing Adult Educational programs, and her lifelong ambition to teach children. In this book the author has relied on Aafia's Siddiqui's court case trial documents, hearing transcripts, defense and witnesses testimonies, and the court orders to offer in depth factual information about this politically controversial figure. It brings forth Aafia's narrative like never before.The author has also touched upon Aafia's importance for US government foreign policy in using Aafia as a bargaining exchange chip for Shakil Afridi who is imprisoned in Pakistan to have helped Americans find Osama Bin Laden in Pakistan.This book is written to raise awareness, encourage dialogue on abuses during the war on terror era, and in hopes of uncovering solutions. It hopes to reach people concerned with human rights, those who love real life mysteries, those interested in the ramifications of the war on terror, those interested in legal issues, a global audience, and more.Praise for Aafia Unheard: "Aafia Unheard marks the first serious effort to tell the complicated and mysterious story of Aafia Siddiqui, and it is an excellent product. Dawood Ghazanavi, taking advantage of his expertise as a lawyer, uses legal documents and other key sources to piece together a fascinating narrative. What is particularly significant about Aafia Unheard is that it does not take a position on the case. Instead, it simply presents all the information and invites the reader to make his or her own conclusions. Ghazanavi's account does a masterful job of telling a story that is long overdue to be told, given its close connection to many hot-button issues ranging from the war in Afghanistan and the global war on terror to the volatile U.S.-Pakistan relationship." - Micheal Kugelman Deputy Director, Woodrow Wilson Center"Having investigated the troubling case of Dr. Aafia Siddiqui for more than 15 years now as a journalist, it is refreshing to see a new book on the subject. Aafia Unheard is probably the most comprehensive on the subject to date. It is also written in a style that lets the reader decide and draw their own conclusions. Ghazanavi has left no stone unturned in his search for the truth." - Yvonne Ridley, British Journalist and Author"Now Dawood Ghazanavi has uncovered the personal and legal mysteries surrounding the most wanted woman (Prisoner No.650). Through the proceedings in the court and testimony of witnesses, Mr. Ghazanavi has taken readers through what Dr. Siddiqui suffered." - Senator Dr. S.M. ZafarBook Details: Aafia Unheard Uncovering the Personal and Legal Mysteries Surrounding FBI's Most Wanted Woman By Dawood Ghazanavi Publisher: Book Baby Release Date: October 15, 2019 ISBN: 978-1543973808 ASIN: B07XP7J1ZY Pages: 182 Genre: Non-FictionAbout the Author: Born in Sialkot, Pakistan, Dawood Ghazanavi, from an early age followed the legacy of the Sayed Ghazanavi family (considered to be one of the ruling classes in Afghanistan). He finished his LLB (Hons) Degree and trained to be a solicitor simultaneously from the University of Law in the United Kingdom.His previous works include his book "Thinking Ahead: The Role of Pakistan Diaspora in the 21st Century" and prominent Supreme Court cases: Overseas Pakistani Right to Vote, Pakistani Prisoners Detained Abroad, Freedom of Information Act 2017 Implementation, Land Reform, and Challenging the Contempt of Court Ordinance.Contact: Website: https://aafiaunheard.com/ Twitter: https://twitter.com/DawoodGhazanavi Facebook: https://www.facebook.com/Aafia-Unheard-107134357293641/ LinkedIn: https://www.linkedin.com/in/muhammad-dawood-ghazanavi-03028a191 Promo Link: http://bookbuzz.net/blog/non-fiction-aafia-unheard/Purchase Links: https://www.amazon.com/Aafia-Unheard-Uncovering-Mysteries-Surrounding-ebook/dp/B07XP7J1ZY https://www.barnesandnoble.com/w/aafia-unheard-dawood-ghazanavi/1133754464?ean=9781543973808 https://www.indiebound.org/book/9781543973808 https://store.bookbaby.com/book/aafia-unheard1BookBuzz.net 59 Heritage Way Drive Rome, GA 30165Website: http://bookbuzz.net/blog/non-fiction-aafia-unheard/BookBuzz.net helps indie authors, hybrid authors, and small publishers promote and market their books. We also help with book reviews, publicity, and more. Let's Create Some Buzz For Your Book!!!