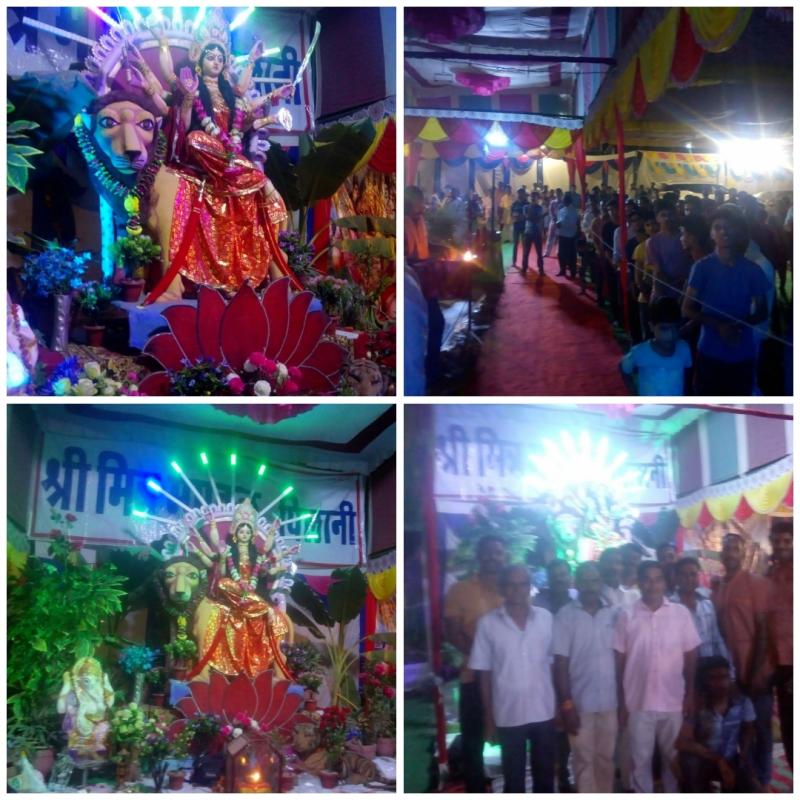 Located in the heart of Shekhawati, Pilani considered the Oasis in the desert state of Rajasthan is well known in India today for various top ranking establishments which include one of the Institutions of Eminence Birla Institute of Technology and Science BITS Pilani, CSIR CEERI, L.N. Birla Naturopathy & Yoga Kendra and Birla Science Centre. Durga, in Sanskrit means "She who is incomprehensible or difficult to reach” and as the Mother of the Universe bestowed with infinite power she is the symbol of female dynamism. It is quite likely that Stanley Horowitz made the quote “Winter is an etching, spring a watercolor, summer an oil painting and autumn a mosaic of them all" possibly after seeing a Durga Puja in India”. This year Pilani has over forty Devi Pujas a big number indeed for a small town. The Mitra Mandal Puja which is in its 19th year organized next to the Devi Mandir in Pilani facing the Ram Lila Grounds is undoubtedly the most popular one.For this year, Mitra Mandal brought pandit Nritya Sastri from Vrindavan – Mathura to perform all the rituals during the Navratras which started with the Kalash Sthapna on 29 Sep. Daily Artis which are held in the morning and evening attract thousands of devotees. The Maha Ashtami day which fell on Sunday 6 October this year was a peak day for Mitra Mandal Puja. It goes without saying that Team Mitra Mandal which is the most sought after group for Sunderkand Path in Shekawati region gave a high octane performance in the pandal. In addition to daily bhajan sessions, Mitra mandal is a hub of cultural activities. Various competitions are held for both visual arts and performing arts which include rangoli, singing, drawing and solo dancing. For the Maha Navami day on 07 Oct 2019, Mitra Mandal had invited as devotee of honour Prof BR Natarajan from Banashali Vidyapith which features in Times Higher Education THE World Rankings as one among the best 3 - 4% global universities and Second Best Women’s University in the world. The budget of the Mitra Mandal Puja runs into six figures with voluntary donations from large hearted citizens of Pilani. Arvind Runthala and Sushil Saini who are employed at BITS Pilani indeed have taken up the Mitra Mandal Puja as a Mission with Passion for the past ten years. Team Mitra mandal regularly takes up social issues with passion and this year during Navratra they had taken up Swachh Bharat abhiyan with utter seriousness it deserves.Mitra Mandal Puja Mr Arvind Runthala (opposite to Pilani Police Station), Loharu Road Pilani Rajasthan 333031 India Email arvinddlpd@gmail.comDesert Chronicle does freelancing cyber journalism on events which matter in and around Pilani

06-05-2012 | Science & Education
Desert Chronicle
Pilani Rajasthan BBVP - Birla Balika Vidyapeeth Girls March to Glory with CBSE C …
For the seven decade old school founded by the doyen of Indian industry Late Padma Vibhushan Shri G D Birla, present Principal Dr (Mrs) M Kasturi with pride says “The Finest Inheritance we give a Girl Child – Wings to Fly.” For the last 53 years, the one constant in the 26 January Republic Day Parade at RajPath Delhi has been the NCC girls’ Pilani band from Birla Balika Vidyapeeth and
05-03-2012 | IT, New Media & Software
Desert Chronicle
World Press Freedom Day Salute to openPR from Pilani Rajasthan
Press freedom is considered to be a cornerstone of human rights and a guarantee of other freedoms. No one may be able to change the latitude and longitude of a place but media can definitely change the altitude of the place. With potential to make fact as fiction and fiction as fact, media is indeed the most powerful entity on earth as they control the minds of the masses. Following a
04-30-2012 | Arts & Culture
Desert Chronicle
Making Towering Statues - Mission with Passion for Pilani Sculptor Matu Ram Verm …
Born on 06 March 1945 at Pilani located in the heart of the artistically well known Shekhawati Region of Rajasthan, Matu Ram Verma had a struggling childhood and had his education at Arjun School in Pilani which was then under the patronage of the Birla Education Trust. Near the entrance to the auditorium of BITS Pilani no one could have missed the captivating paintings done by the famous artist Shri
04-23-2012 | Politics, Law & Society
Desert Chronicle
Pilani Golden Couple Celebrate Milestone Wedding Anniversary
The highest happiness on earth is marriage and even though the order may vary for any given year, a wedding anniversary is invariably the celebration of love, trust, partnership, tolerance and tenacity. In America, couples celebrating Golden Jubilee of their wedding anniversary may be lucky to get greetings from the President of USA and similarly in countries like Canada, Australia etc. In UK the Queen from the Buckingham palace may

03-25-2019 | Health & Medicine
The Insight Partners
Blood Bags Market Current Trends and Future Demand 2027 Qingdao Sinoland Interna …
The blood bags market is anticipated to grow in the forecast period owing to key factors such as increasing prevalence of diseases such as cancer and various blood related disorder, such as hemophilia, anemia, and sickle cell disease is rising demand for blood transfusion. Whereas, the technological advances and growing number of cancer incidences offer opportunities to expand their customer reach in the emerging regions. The "Global Blood Bags Market Analysis
01-17-2018 | Business, Economy, Finances, B …
ereportsmarket
Global Medical Specialty Bags Market 2018- Smiths Medical, Teleflex , Ambu, Mitr …
eReportsMarket has recently added a new Medical Specialty Bags research report to its huge database of research studies. The research report, titled “Global Medical Specialty Bags Industry 2018 Market Research Report,” provides a comprehensive analysis of the industry, including an overview, Medical Specialty Bags market drivers and restraints, product segmentation, and major geographical segments. The Medical Specialty Bags study also covers the competitive scenario of the global Medical Specialty Bags market,
02-23-2017 | Science & Education
Mahindra Ecole Centrale
Sugata Mitra , eminent educationist, shares his vision of the Future of Learning …
Sugata Mitra , eminent educationist, shares his vision of the Future of Learning with Students and Faculty of Mahindra Ecole Centrale The talk, organized by MEC’s thought leadership series, focused on education which is cloud based and self organized Mahindra Ecole Centrale(MEC), an Indo-French engineering college, hosted Sugata Mitra, an eminent educationist, on the campus for a talk on the “Future of Learning”.This talk, a part of the
11-29-2012 | Business, Economy, Finances, B …
MWB Business Exchange
Success in the Business World: Rajem Kumar was Given the 2012 Laghu Udyog Mitra …
Discover the accomplishments of a handful of SME specialists in India. Check out this post to know who these successful entrepreneurs are. Rajem Kumar, SME World Chief Editor, was chosen as this year’s recipient for Laghu Udyog Mitra Award for his outstanding contribution in the growth and development of the Small Medium Enterprise (SME) industry in India. Aside from Kumar, Dr. HP Kumar, Chairman and Managing Director of National Small Industries Corporation,
05-03-2012 | Science & Education
VIT University Jaipur
Dr. Amitava ‘Babi’ Mitra joins VIT University, Jaipur as its first President …
He is an alumnus of BITS Pilani and was formerly Executive Director at the Massachusetts Institute of Technology - MIT USA Dr. Amitava ‘Babi’ Mitra joined recently as the President and Vice Chancellor of the newly created VIT University, Jaipur. A proven international leader in delivering technology-enabled educational solutions in demanding environments in the US and India, Dr. Mitra has successfully led 40-600 people entrepreneurial ventures at MIT, USA, BITS, Pilani,
10-07-2011 | Leisure, Entertainment, Miscel …
Desert Chronicle
Pilani Rajasthan Springs to Fun and Frolic in Fall - Mitra Mandal Devi Puja
Located in the heart of Shekhawati region of Rajasthan, Pilani is well known in India today for various top ranking educational institutions, CSIR Laboratory CEERI as well as the upcoming BrahMos Missile Assembly Project Unit. Durga, in Sanskrit means "She who is incomprehensible or difficult to reach” and as the Mother of the Universe bestowed with infinite power she is the symbol of female dynamism. This year Pilani had over a
Comments about openPR
Your portal is fast, simple, and easy to use. Others may have more functions but they also demand more editing time, you have to preformat the text in order to achieve a good result etc. I think openPR is really fantastic!
Andreas Knepper, wallmedien AG