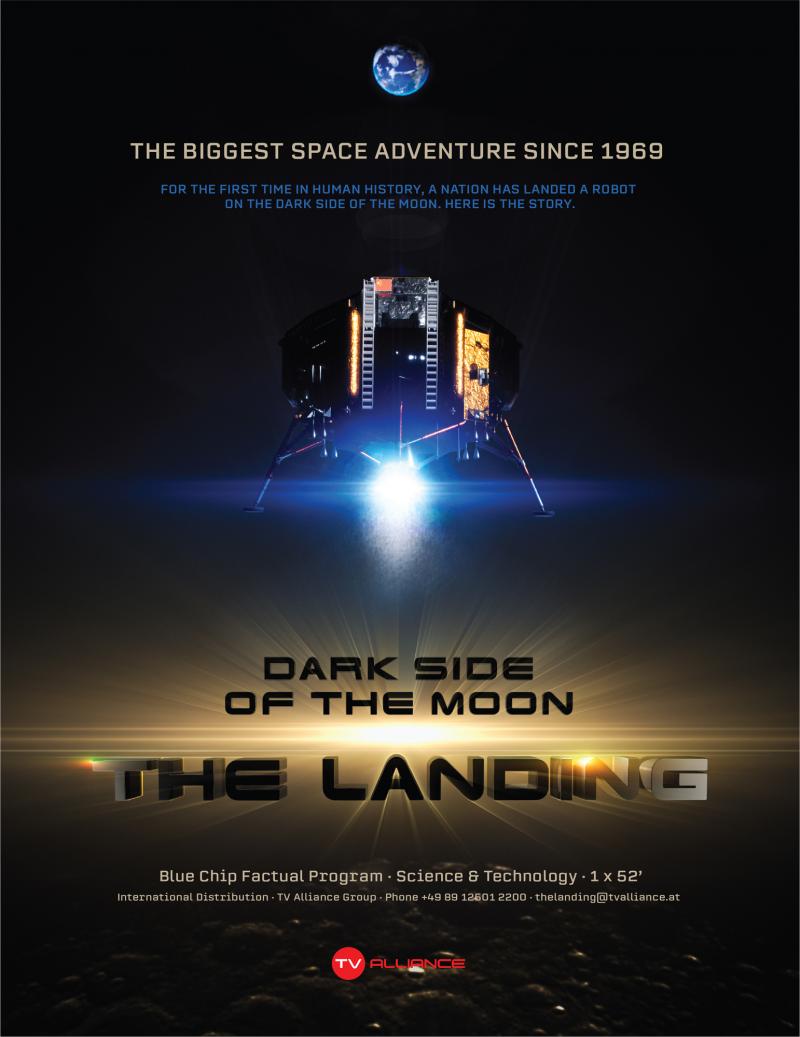 Salzburg/Munich - Without causing a big sensation, the Chinese probe Chang’e 4 and its moon rover Yutu succeeded in landing on the far side of the moon on January 3, 2019. So far, this side of the moon has hardly been researched and landing there is technologically very challenging. Therefore the People’s Republic achieved a surprising success, which amazed scientists around the world. Until then, no nation had ever managed to land on the dark side of the moon.Up to now only very few images and videos of the mission have been published. European media company TV Alliance and Chinese state broadcaster CCTV co-produced a lavish documentary on this subject. Its unique and exclusive images not only show the spectacular landing on the dark side of the moon, but also offer an insight into the People’s Republic’s space program. The former German space shuttle astronaut Prof. Dr. Ulrich Walter comments the landing from the Western point of view."We are happy that we were able to realize such an exciting and extraordinary project together with our colleagues from CCTV. The Chinese production team did a great job. It was a very pleasant cooperation", says Michael Radtke, Managing Director of TV Alliance.The documentary has just been finished and will be presented for the first time at MIPCOM, the world’s largest TV trade fair in Cannes, on October 14. Watch trailer: https://vimeo.com/358152988 Download flyer and photos: https://www.dropbox.com/sh/0qrvrvaj8ktobvx/AABfl5r0nrF0qhC8U8wvdnr8a?dl=0TV A2 Media GmbH Barbara Wolf Erich-Zeitler-Str. 1 85737 IsmaningPresscontact: Barbara Wolf email: bwolf@tvalliance.at tel.: +49-89-12501 2200 web: www.tvalliance.atTV Alliance is located in Salzburg and Munich and was founded by Michael Radtke in 2006. The company specializes in international distribution and production of TV programs.

01-17-2019 | IT, New Media & Software
Datazoom, Inc.
DATAZOOM JOINS STREAMING VIDEO ALLIANCE
FOR IMMEDIATE RELEASE: NEW YORK, New York - January 15, 2019 - DATAZOOM, the data control and integration management platform for every layer of the video technology system stack is pleased to announce it has been awarded a 2019 MEMBERSHIP GRANT and admittance into the STREAMING VIDEO ALLIANCE , the premier video industry forum for media companies to collaborate and collectively improve video streaming. Founded in 2014, the Streaming Video
06-20-2018 | Advertising, Media Consulting, …
Spire Research and Consulting
India and Japan’s strategic alliance
Indian Prime Minister Narendra Modi along with Japanese Prime Minister Shinzo Abe agreed to work on an open Indo-Pacific region strategy with cooperation in infrastructure development and maritime security. The Japanese government will pump in more investment into high-quality railway and road network projects. Can a strategic alliance between Japan and India help in maintaining a stable regional balance of power, given the current stance of the US? Find out more here: https://www.spireresearch.com/newsroom/spirethoughts/india-and-japans-strategic-alliance/ Spire
05-15-2014 | IT, New Media & Software
Color Alliance
Technological Alliance between Caldera and Color Alliance
Offers perfectly matched RIP and Workflow Systems Color Alliance (CA), specialist for digital large format printing and provider of web to print software for printing plants and LFP service providers and Caldera, a leading provider of RIP and workflow solutions, form a technological alliance to offer perfectly matched RIP and workflow systems to their more than fifteen thousand customers worldwide. This allows users to optimally drive and operate their machines
10-14-2011 | Media & Telecommunications
Comarch S.A.
Comarch joins the GENIVI Alliance
COMARCH, a global provider of IT solutions for major economic sectors, announced today that it has become an Associate member of GENIVI Alliance, an automotive and consumer electronics industry association devoted to the development and support of the In-Vehicle Infotainment (IVI) reference platform. Comarch has been implementing components for modern mobile operating systems, including those based on Linux kernel, for the past 11 years. Over 200 specialized engineers, working in the
01-10-2011 | Industry, Real Estate & Constr …
esz AG calibration & metrology
High-End Calibration Alliance
Due to the latest changes and relocation of the calibration laboratory of the Fluke Deutschland GmbH - one of europe's high end calibration laboratories - the traceability chain in Germany and Europe has been stressed since the middle of 2010. Finally esz AG, together with the newly founded 1A CAL GmbH, supported the setting up of calibration capabilities for primary and secondary laboratory standards for most calibration laboratories, equipment and
09-30-2010 | Media & Telecommunications
IP500 Alliance
Major Companies formed IP500 Alliance
Berlin, Germany, (September 13th, 2010) DORMA, Gunnebo, JOB detectomat, Honeywell, LINK, SimonVoss, STG Beikirch, Swissphone, UTC, WAGO and more OEMs have now finalized the formation of an association (official Alliance) to drive interoperability and easy installation of smart devices in building automation applications based on IPv6. Key elements of the IP500 solution as the rising wireless standard for low-power smart sensor devices (internet of things and smart objects) is focused on
Comments about openPR
Your portal is fast, simple, and easy to use. Others may have more functions but they also demand more editing time, you have to preformat the text in order to achieve a good result etc. I think openPR is really fantastic!
Andreas Knepper, wallmedien AG