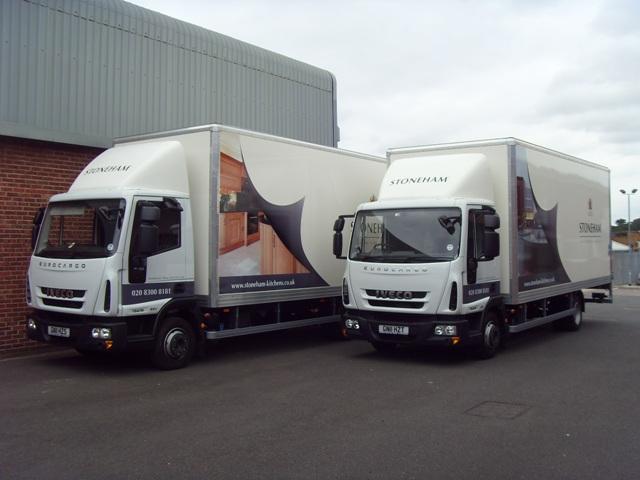 Vehicle signage specialist, Creative FX, has wrapped a brand new fleet of vehicles for leading bespoke kitchen and furniture manufacturer, Stoneham Kitchens, as part of its branding campaign.The vinyl wraps feature a clever ‘peel back’ design to reveal one of Stoneham’s stunning kitchens. With each vehicle featuring a different kitchen, the liveries are designed to catch the eye of passersby and invite them to visit the company’s brand new website, launched in March this year.“We want to create consistency across all points of customer contact,” says managing director, Adrian Stoneham. “As a premium brand kitchen with a Royal warrant, smart corporate vehicle livery is essential to our brand image.”So far it has taken the Creative FX team five hours to apply the graphics to five vehicles; all of which have recently been newly purchased by Stoneham Kitchens as part of its mission to meet and exceed future emissions requirements. Mr Stoneham says: “We recognise the importance of the environment, and extend sustainable practice throughout the organisation, from manufacturing to our vehicle fleet.”Creative FX and Stoneham Kitchens have been working together for over 12 years, in which time a considerable number of Stoneham vehicles have been wrapped. “Creative FX’s professionalism, expertise and ability to respond rapidly to our requirements makes them an excellent business partner,” says Mr Stoneham.Coincidentally, the relationship between the two organisations extends much further back than 12 years, with Creative FX Director, Sean Davis sharing a heritage with the furniture manufacturer. “My ancestors grew up in Reginald Square, South East London, where Stoneham Kitchens first began back in 1864,” says Mr Davis. “And we believe the two families knew each other.”Liveries, following the same design, will be applied by Creative FX to more Stoneham vehicles shortly to extend the brand image across the entire fleet.About Creative FXCreative FX is a Bromley-based company specialising in vehicle livery and automotive services, as well as signage and display projects.We specialise in the design, production and installation of vehicle wraps for both the commercial and retail sectors. Any design can be used from simple text and logo to a fully photographic vehicle wrap. We also provide stoneguard and window tinting services.As well as wrapping individual vehicles, the Creative FX team has also carried out projects for major car manufacturers, and has completed numerous special commission projects for events and charities, such as: Arsenal FC (Teenage Cancer Trust); Audi (the featured sculpture at the 2009 Goodwood Festival of Speed); Nissan (163 Union Jack-wrapped Micras, for the Government vehicle scrappage scheme): and an Electric G-Wiz, sold by Gordon Ramsay at a charity auction for nearly £50,000.Creative FX is an authorised supplier of vehicle badging for a number of leading car manufacturers including Audi, Toyota GB and Renault UK.Sean Davis (Director) Creative FX 145 Masons Hill Bromley Kent, UK BR2 9HW+44 (0) 20 8313 1146 info@fxuk.net www.fxuk.net

03-09-2021 | Business, Economy, Finances, B …
Worldwide Market Reports
Alarm Detector Market Growing Massively by 2021-2027 Focusing on Top Players
Alarm are essential to the early detection of fire in the residential, commercial, and industrial sectors around the world. In fires, smoke and toxic gases tend to spread farther and farther away from heat, resulting in death from inhaling smoke and toxic gases. The growth of the commercial and IT sector to protect high value assets such as data centers, production facilities, power stations, buildings and IT infrastructure is attracting
05-09-2019 | IT, New Media & Software
randy seo
11 AMAZING TOOLS FOR GENERATING BLOG TOPIC IDEAS
A blog has no uncertainty turned into a basic piece of any fruitful site nowadays. In the event that you possess a site and haven't begun a blog for it yet, it's an ideal opportunity to begin. In the event that you have been reluctant to begin a blog (or don't refresh your blog routinely) in light of the fact that you can't think about any great themes to expound
01-31-2013 | Fashion, Lifestyle, Trends
Stoneham Kitchens
Stoneham Kitchens joiner still carving out fine career at 80
Craftsman Ron Taylor who works full time at Sidcup-based bespoke kitchen and furniture manufacturer, Stoneham Plc, celebrated his 80th birthday yesterday - and has no plans to retire just yet. Part of the Stoneham production team and a time-served bench joiner, Ron has well over 60 years experience and has been in the furniture trade all his working life, with the exception of a short stint in the army for National
Comments about openPR
9 o'clock: discuss press release with client, 10 o'clock: submit release to openPR, within the briefest possible time release is published and displayed in a prominent place on openPR.de. I am thrilled!
Zehra Spindler, Calypso Now! - Communication Agency