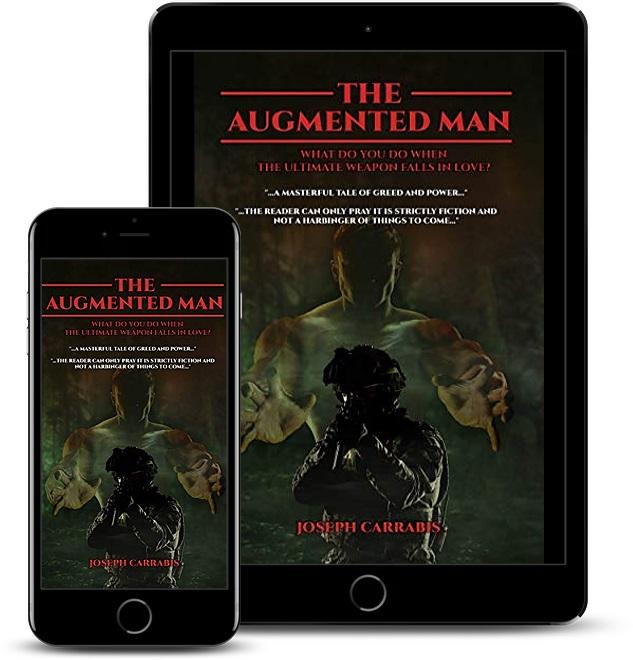 Author Joseph Carrabis Releases New Sci-fi Military Thriller - The Augmented ManAuthor Joseph Carrabis is pleased to announce the release of his sci-fi military thriller, The Augmented Man. Released by Black Rose Writing in July 2019, the book is already receiving rave reviews from readers and reviewers.What do you do with a deadly weapon when it's no longer needed?Nicholas Trailer is the last of The Augmented Men, beings created first by society and completed by a political group the public can't even imagine exists. Captain James Don-aldson takes severely abused and traumatized children and modifies them into monsters capable of the most horrifying deeds without feeling any remorse or regret.But the horrors of war never stay on the battlefield. They always come home.Battling what society and science has made him, Nick Trailer discovers he is loved. From the horrors of childhood to the horrors of a war, what does it take for someone to find true love and peace? Especially when everyone has their own agenda, from the senators who sanctioned his making to the Governor of Maine who wants to use Nick's struggle to propel himself to the White House.The Augmented Men were good at war, perhaps a little too good. Now they have to come home...or do they? What do you do with man-made monsters? Nick must decide if his friends are his friends and if his enemies are his enemies, all while protecting the wom-an he loves.And are you truly the last of your kind?What if you must remain a monster to defeat a monster? Will you sacrifice love to pro-tect what you love?Praise for The Augmented Man:"... Joseph Carrabis's newest novel, The Augmented Man, thrusts the reader into an un-known but realistic world of the future where governments create devastating war weapons of their choosing....This exciting story will make the reader truly question if such things as The Augmented Man could or does exist under the blackness of govern-ment secrecy. At the conclusion of the novel, the reader can only pray it is strictly fic-tion and not a harbinger of things to come in the near future." - John R. Beyer, award winning author of fictional short stories and novels"Carrabis writes a masterful tale of how greed and power can corrupt the better judge-ment of a man. Although this story is set in the future, it actually seems plausible that the sorts of physiological and psychological modifications discussed and inflicted on some of the characters could and have occurred in the name of military dominance. It was fascinating to me how Carrabis compared the capability of Navy Seals as an exam-ple against the next gen efforts as well as the results." - Rox Burkey, CoAuthor of the award winning Enigma SeriesBook Details: The Augmented Man By Joseph Carrabis Publisher: Black Rose Writing Published: July 2019 ISBN: 978-1684333172 ASIN: B07VXKVFY3 Pages: 311 Genre: Sci-fi Military ThrillerAbout the Author: Joseph Carrabis is the author of over a dozen novels and hundreds of short stories, in-cluding the Nebula-nominated Cymodoce and the Pushcart nominated The Weight. Raised by his maternal grandfather John, Joseph developed a thirst for knowledge that would motivate him to seek immersion within indigenous societies all over the world. These experiences compelled Joseph to help others and have inspired his writing. In addition to writing fiction, Joseph is the author of internationally best-selling non-fiction. Prior to becoming a full-time author, Joseph sat on several advisory boards in-cluding the Center for Multicultural Science and the Journal of Cultural Marketing Strategy. He was a Senior Research Fellow at the Society for New Communications Re-search, an Annenberg Fellow at the University of Southern California, and served with the UN/NYAS Scientists Without Borders program. Joseph was born in Melrose, MA, and currently lives in Nashua, New Hampshire with his wife, Susan, and their two four-legged children Boo and Ghost.Contact: Website: http://josephcarrabis.com Twitter: http://twitter.com/JosephCarrabis Facebook: https://www.facebook.com/JosephCarrabisAuthor/ LinkedIn: https://www.linkedin.com/in/josephcarrabis Promo Link: http://bookbuzz.net/blog/sci-fi-military-thriller-the-augmented-man/Purchase Links: https://www.amazon.com/Augmented-Man-Joseph-Carrabis-ebook/dp/B07VXKVFY3 https://www.barnesandnoble.com/w/the-augmented-man-joseph-carrabis/1131949836?ean=9781684333172 https://www.indiebound.org/book/9781684333172 https://play.google.com/store/books/details/Joseph_Carrabis_The_Augmented_Man?id=OF-mDwAAQBAJ https://www.blackrosewriting.com/thrillers/theaugmentedmanBookBuzz.net 59 Heritage Way Drive Rome, GA 30165Website: https://bookbuzz.net/blog/sci-fi-military-thriller-the-augmented-man/BookBuzz.net helps indie authors, hybrid authors, and small publishers promote and market their books. We also help with book reviews, publicity, and more. Let's Create Some Buzz For Your Book!!!