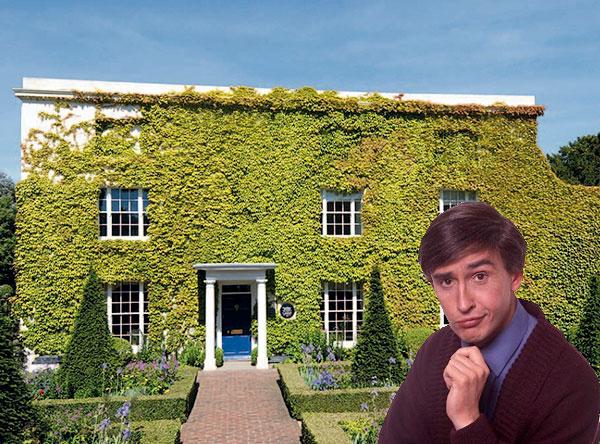 British comedian and Hollywood actor Steve Coogan won’t need to stay at the local Travel Tavern like his comedy alter-ego ‘Alan Partridge’. He is now the proud new owner of Ovingdean Grange near Brighton in West Sussex, United Kingdom. Coogan paid a reported £2.45 million (US$3.95 million) for the property.

The sixteenth century Grade II listed building has six bedrooms a billiard room, a cinema and is surrounded by walled gardens.

The property was immortalised in the 1857 novel ‘Ovingdean Grange: A Tale of the South Downs’ by William Harrison Ainsworth.

The book is set in England in 1651. It tells the tale of how King Charles II escaped his enemies by hiding in an oak tree in the grounds of the house before he fled to France at the end of the English Civil War.

Charles is also thought to have spent an uncomfortable night hiding from The Roundheads in the chimney breast of the master bedroom. And, despite spending just twenty four hours at the house, he is said to have fathered a child in the process.

In reality, the defeated king took refuge at Boscobel House in Brewood, Staffordshire.

Ainsworth also revealed that his inspiration for the manor house in his most famous work ‘Rookwood’ came from his memories of Ovingdean Grange. Published in 1834, the book popularised the story of highwayman Dick Turpin.

Steve Coogan is probably best known for his character ‘Alan Partridge’; a socially inept local radio presenter from Norwich.
He has also appeared in several Hollywood films such as; ‘Around the World in 80 Days’, ‘Night at the Museum’, ‘Tropic Thunder’, ‘Hamlet 2’ and ‘The Other Guys’.

Rebecca Smith is a real estate journalist and author with over 15 years experience. She has published 3 books to date:

'The Definitive Guide to buying property in Phuket' - http://blog.phuketoceanvillas.com/the-definitive-guide-to-buying-property-in-phuket-pr/

'The Definitive Guide to buying property in Thailand' - http://blog.oceanvillasgroup.com/the-definitive-guide-to-buying-property-in-thailand-pr/