Grafica collaborates with Terascreen, France to market its screen printing machines in Europe 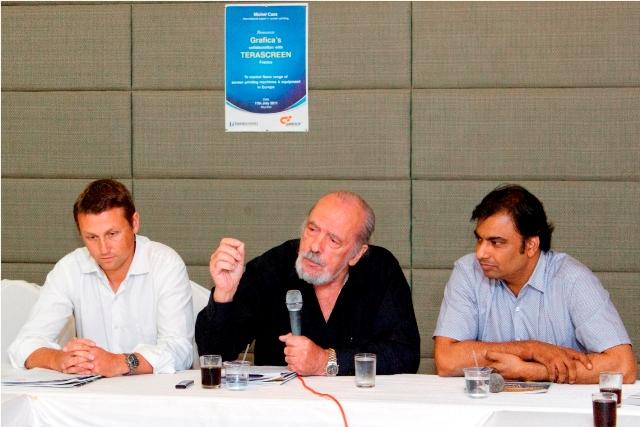 Michel Caza, Howard Parmele Award 2010, has been also President of FESPA until 2005 and Chairman of the ASPT (SGIA Academy of Screen Printing Technology until 2006.

Grafica’s Nano series machine include: Nano-Print, Nano-Print plus, Nano UV, Nano-Screen Maker 5-in-1, Nano Sharpener and all put together it is also offered as ‘Nano Premier League’ (NPL) and NPL plus packages.

Michel and his colleague Erwan - were in India on a 3-day visit to Grafica’s factory and their institute DMI (from 10th till 12th July) to inspect the manufacturing facilities/capabilities and then to fine tune the deal.

After inspection of Nano series machines and equipment at Grafica’s factory near Mumbai, Michel said: “The Nano series screen printing systems are genius and Clever, Clean, Cheap, that’s how I define the Nano System.”

“Upon inspection of Grafica’s Nano-Screen Maker 5-in-1 I found that it is a unique screen making system which I have never seen elsewhere in the world. It has unique design and perfect to produce high quality screens which is very important considering that screen is the heart of screen printing,” he told the media persons.

A French trade event - Nova will be held next year which is dedicated to Sign and Graphic printing under a new concept in Exhibition, an open space dedicated to true and real demonstration of equipments and products at several levels shown at work by the manufacturers or their agents.

“That is where we shall launch – beginning of next year - at the real scale under the brand Terascreen, distributing in Europe Grafica’s Nano machinery and equipments,” said Michel.

“Initially we intend to target to small and medium companies, but there could be possibility of introducing these machines to big ones for Niche or special applications (e.g. heat transfers applications or special effects on small runs offset or digitally printed which be done mostly with Nano-Print Plus – 22 inch x 28 inch),” Michel stated.

Michel said that this size may be more suitable to the European market and the fact the Nano-Plus has a lift of the screen while printing is a big Plus for this market. “Similarly, Nano-Screen Maker 5 in 1, it can be used too at that size made the whole of the Nano League extremely adapted to the printers we target,” he said.

Grafica has already exported its machines to USA, Russia, Europe, Middle East, Mauritius, African countries. Grafica has recently appointed a dealer in UAE to distribute and service its machines in the Middle East following which it had successfully participated in three exhibitions in Dubai during the financial year 2010-2011. The company is also all set to explore the US market in a big way and a ‘Supplier for North American Market’ is already working in this direction. The company also plans to participate in the forthcoming SGIA expo in USA.

“With the formation of dealer networks in India, Middle East, USA, Europe, Grafica gears up to play a leading role in the screen printing industry,” commented Bhargav, Grafica’s MD. “The tie up with Terascreen is a major breakthrough for our company,” he added.

About Grafica Flextronica and DMI institute:

Established in 1989, Grafica is the only screen printing machine manufacturer in the world to impart free education and training in advanced screen printing with 100% practical approach through its industry initiative DMI – Dhirubhai Mistry Institute for Print Education, Research & Training, run without any outside funding.

Set up in 2006, DMI is the only institute in the world dedicated for imparting education to print technology students and printing professionals free of cost.

Terascreen has 6 share holders: Erwan and Stephanie Guiziou, Therese and Michel Caza, Artem Nadisravili from Russia and Guillaume who own 3 magazines in France, Spain and Italy. They mostly organise a French Exhibition dedicated to Promotional Textile, Promotional Objects – CTCO in Lyon France.

Each of them has a precise role to play in the task. Erwan – the Key man of Terascreen - and Artem sell and deliver, Therese take care of organisation and of a good part of management, Guillaume exhibits in its different events, Michel will take care of marketing, using his old friends and pupils in the European market.

They shall use a good part of the marketing techniques of Grafica in India; it is a good model, but our big idea is to have in each country a Pilot company. We use a first chosen Pilot company to buy the Nano-Premier League (NPLs) at a very fair price at the condition they permit other companies in their own country to look at the operations; a kind of Permanent Living Workshop where even their competitors can come.

You can edit or delete your press release Grafica collaborates with Terascreen, France to market its screen printing machines in Europe here