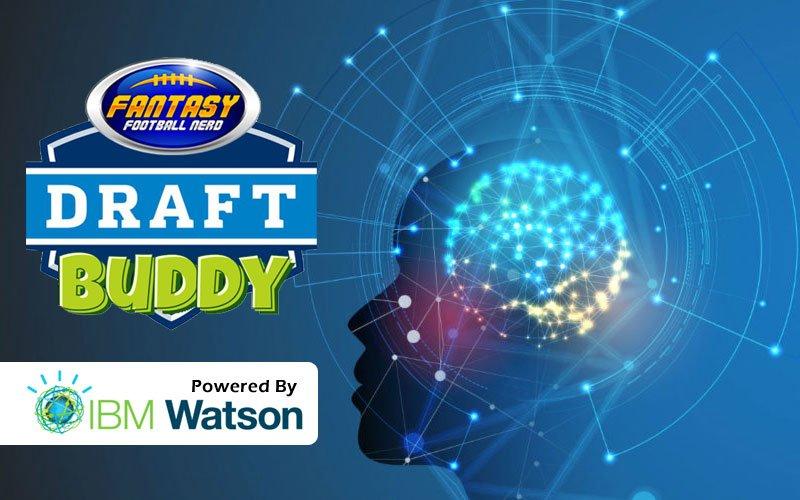 Fantasy football players have a new tool in their playbook this season. Fantasy Football Nerd recently announced the availability of player draft recommendations from IBM Watson within their proprietary Draft Buddy application.Powered by the latest innovations in machine learning, Watson is an open, multicloud platform providing the world's most advanced convergence of data science and artificial intelligence (AI). The Fantasy Football Nerd Draft Buddy is an interactive, web-based cheat sheet designed to aid players during their upcoming drafts. It's an independent tool for those who want to use the Nerd's draft rankings during their draft instead of, or in addition to, the default rankings provided by their league management program. Leveraging such data as current draft picks, remaining players, average draft position (ADP), roster needs, byes, handcuffs, and many more signals and datasets including previous drafts, Watson's advanced machine learning can help recommend the optimal draft pick. Watson is essentially predicting the next best pick based upon the given situation."More than 80% of customers are interested in computer-generated draft advice, so leveraging Watson within our Draft Buddy was a natural evolution for our product line.", said Joe Dyken, the founder and CEO of Fantasy Football Nerd's parent company TayTech LLC. "As with any of our products in beta state, the Watson integration remains a work in progress and we anticipate it getting better over the course of time. Machine learning is a technique where a system tries to get better day by day by learning new things, just like we humans do. When you're staring at the draft clock and wondering who should be on your championship team, Watson can help take some of that hesitation away."Fantasy Football Nerd is not the first company to leverage the AI power of IBM Watson. Industry heavyweight ESPN integrated Watson's AI capabilities into their popular ESPN Fantasy app last year to help players calculate risk/reward scenarios. Leveraging the power of AI is expected to become more commonplace over the next few years as the barriers of entry to the technology are lowered.FantasyFootballNerd.com started in 2008 and was the first company to aggregate the rankings and projections of fantasy experts from around the web. The company remains the only one in the industry using a proprietary algorithm that weights those rankings and projections based upon the accuracy of each source. It has been called the "Best Kept Secret in Fantasy Football" by the New York Times and the "Cliff's Notes of the Industry" by the Washington Post. More than one million players used Fantasy Football Nerd last year to help them win their leagues.To learn more about Fantasy Football Nerd, please visit www.fantasyfootballnerd.com.TayTech LLC 1025 West 20th Avenue #2041 Oshkosh, WI 54903Joe Dyken, CEO E: nerd@fantasyfootballnerd.com P: 917-727-4563FantasyFootballNerd.com (FFN) has been recognized as one of the industry's most accurate rankings and projections aggregator. Its mission is to help people win their leagues by applying a "wisdom of the crowd" approach to both draft and weekly fantasy football rankings and projections. FFN is owned by TayTech, LLC, a privately held firm based in Oshkosh, WI.

11-15-2019 | Business, Economy, Finances, B …
LupoToro
5 Minutes With Liam James Watson, Chief Executive, LupoToro
Liam James Watson is a young, energetic executive, not dissimilar to other young, energetic executives you'd likely find around Silicon Valley or rising on Wall Street. He is self-made, clear-cut and down to earth. In 2015, Watson was broke, working at Hungry Jacks Burger Joint (akin to Burger King) and had the choice of university or entrepreneurship. He chose the latter. In late 2015 he had started an online pharmacy business
11-30-2018 | Business, Economy, Finances, B …
TMR Research
Food Premix Market – Transforming Benefits Overview 2025 | WATSON-INC, SternVi …
Global Food Premix Market: Snapshot Rising demand for food fortification along with increasingly popularity of fortified custom premixes worldwide is a key factor behind the growth of food premix market. In the recent past, demand for food fortification has increased due to high incidence of micronutrient deficiency disorders globally, and insufficient micronutrients in food are related to severe forms of malnutrition. Wheat, flour, sugar, maize, and vegetable oils are some foods
08-31-2017 | Advertising, Media Consulting, …
market research report 2017
Tung Oil Market 2017-2022 Liberon, Feast Watson, Minwax
Tung Oil Market 2017-2022 Liberon, Feast Watson, Minwax Recently published a detailed market study on the "Tung Oil Market" across the global, regional and country level. The report on the global Tung Oil market uses the top-down and bottom-up approaches to define, analyze, and describe the Tung Oil market trends for the next five years. The Tung Oil market report further provides production, capacity, Tung Oil market price per region, gross
11-29-2012 | Arts & Culture
Johansson Projects
Johansson Projects presents Opal Dust featuring Casey Watson
Opal Dust features Casey Watson depicting the sharp-edged task of portraying a soft exterior. Watson’s meticulous colored pencil and graphite drawings invite the viewer to unearth her treasures and inspect their intricacies. Up close, petals, leaves and stems arrange themselves into romantic kaleidoscopic wreaths. These fibrous orbs careen and breed, evoking ideas of natural symmetry, squished floral formations, and cycles of life and death. From a distance, the same drawings
02-21-2011 | Arts & Culture
Blooming Twig Books
Doc Watson Statue to Be Placed In Downtown Boone
The Downtown Boone Development Association (DBDA) is erecting a statue of Doc Watson on King Street in Boone. The statue is to commemorate Doc in the town he got his musical start in. Doc Watson’s only request is that the statue read “Doc Watson: Just one of the people.” In Blind But Now I See, the no-holds-barred account of Doc Watson's life and career, Doc’s experiences in Boone are retold,
10-28-2010 | Leisure, Entertainment, Miscel …
Blooming Twig Books
Remembering Merle Watson, Son of Legendary Guitarist Doc Watson, on the 25th Ann …
NEW YORK, N.Y. – October 23rd marked the 25th anniversary of Merle Watsons death. Eddy Merle Watson died October 23, 1985 when his tractor rolled over on a steep hillside near his home in Caldwell County N.C. Merle began performing with his father, legendary flatpicking guitarist Doc Watson, in 1964 and would continue touring and recording with him until his death in 1985. Blooming Twig Books has just released “Blind
Comments about openPR
OpenPR ist the nicest and most clearly laid out PR platform I have seen to this day. The press releases are displayed very nicely and clearly and without any unnecessary frills. The updates are fast and the finished release looks appealing and is clearly legible. Even with 16 years of experience one discovers new things from time to time. Congratulations!
Gabriele Ketterl, Director Marketing & PR, Menads