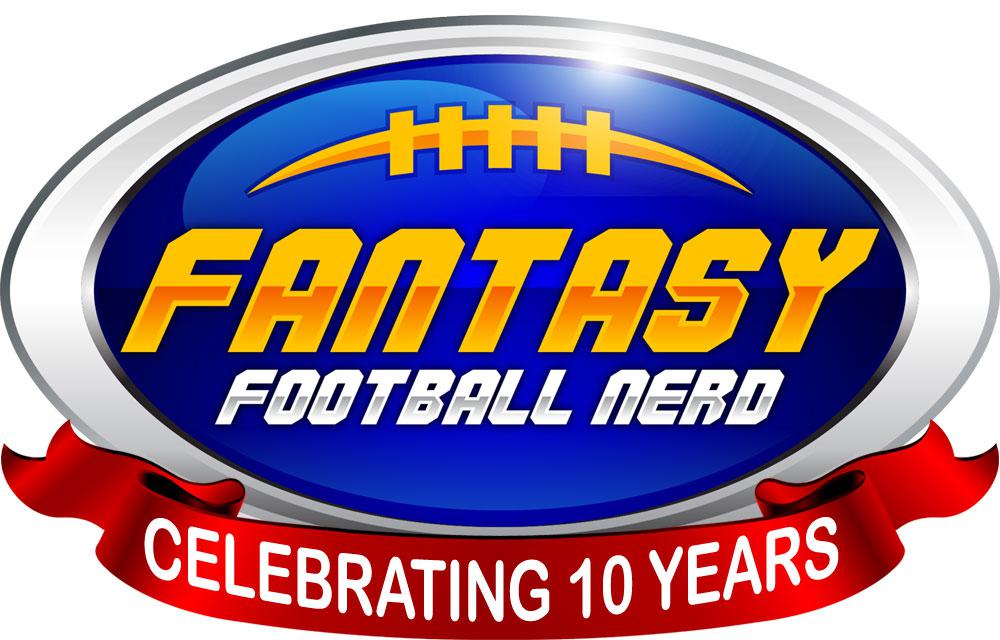 Fantasy Football Nerd recently celebrated its 10th anniversary by announcing new features for the 2018 NFL season. FantasyFootballNerd.com started in 2008 and was the first company to aggregate the rankings and projections of fantasy experts from around the web. The company remains the only one in the industry using a proprietary algorithm that weights those rankings and projections based upon the accuracy of each source. It has been called the "Best Kept Secret in Fantasy Football" by the New York Times and the "Cliff's Notes of the Industry" by the Washington Post. More than one million players used Fantasy Football Nerd last year to help them win their leagues."The reason why we're still here after 10 years providing some of the most accurate rankings and projections in the industry is actually quite simple. We have focused our efforts on being the most accurate and innovative source of fantasy advice. Our patented NerdRank algorithm is at the heart of everything we do, which means that if our users are winning their leagues because we're providing them with the best data, then we're doing our jobs. More than one million people will use our tools this year because we focus heavily on the user experience and deliver the kind of advanced data solutions that they can't find anywhere else," said Joe Dyken, founder and CEO of TayTech LLC, the parent company of FantasyFootballNerd.com. "For every Thomas Edison or Steve Jobs, there are a thousand talented innovators who struggle to keep pace in an industry that is constantly changing. We're looking around corners and working on initiatives that will position us well for many years to come."Some of the new features this year include a dedicated NFL Pick'em application where users can play for prizes by picking the winner of each NFL game throughout the 17-week season. Users can benefit by also seeing the aggregated picks of such NFL experts as Jamey Eisenberg of CBS Sports, Steve Mariucci of NFL GameDay Morning, and Mina Kimes of ESPN. The site also offers a free contest sponsored by the Emmy-nominated HBO series Ballers. The top scoring players on the season will be eligible to win Ballers-themed prizes including an 8x10 Signed Photo from John David Washington who plays the character Ricky Jerret, a copy of the 39-page Ballers "Pilot" TV script, and a copy of Seasons 1 - 3.In addition to NFL Pick'em, Fantasy Football Nerd has enhanced its offering this season with a new Best Ball rankings list designed specifically around the Draft.com platform. The timing couldn't be better as Draft has announced the biggest Best Ball contest in history with a total of $1 million in payouts.Other enhancements for this season include a new Strength of Schedule tool, player injury risk assessment, enhanced Amazon Alexa fantasy football advice, and support for private leagues on ESPN, Yahoo, and CBS Sports. The entire FantasyFootballNerd.com site has undergone a complete redesign making it 38% faster than last season.The company recently held a giveaway to celebrate its tenth anniversary.To learn more about Fantasy Football Nerd, please visit https://www.fantasyfootballnerd.com.FantasyFootballNerd.com (FFN) has been recognized as one of the industry's most accurate rankings and projections aggregator. It's mission is to help people win their leagues by applying a "wisdom of the crowd" approach to both draft and weekly fantasy football rankings and projections. FFN is owned by TayTech, LLC, a privately held firm based in Oshkosh, WI.TayTech, LLC / Fantasy Football Nerd 1025 West 20th Avenue #2041 Oshkosh, WI 54903 917-727-4563

05-29-2019 | Sports
Maxwell-Scott
New NFL partnership ahead of 100th season announced
International luxury leather brand Maxwell-Scott has entered into an exciting collaboration with Dallas Cowboys’ Xavier Woods and Tampa Bay Buccaneers’ Kentrell Brice for this coming football season. Throughout the 100th season of the NFL Maxwell-Scott will provide both players with luxury leather accessories to accompany their busy schedules, as well as offer an edit of the players’ favorite luggage bags and travel accessories. The players have chosen pieces that will
04-16-2012 | Sports
Glover Quin and United Way "Team NFL"
Texans’ Glover Quin Selected to Join United Way’s “Team NFL”
HOUSTON, TX – Houston Texans’ strong safety, Glover Quin, was selected to join United Way’s “Team NFL” in its fight to address the increasing number of high school drop outs in America. Quin joins a host of NFL stars representing all 32 franchises, including Baltimore Ravens’ Vonta Leach, Carolina Panthers’ Cam Newton, Green Bay Packers’ Greg Jennings, and Philadelphia Eagles’ Nnamdi Asomugha. As a United Way representative, Quin will be
11-02-2011 | Health & Medicine
Myosource Kinetic Bands
Myosource Resistance Bands Coach Feels NFL Players Needed More Training
Ask any fantasy football player one frustrating thing about this particular 2011-2012 NFL season, and the answers will likely include “injury.” Starting at week one of the NFL season, several highly ranked players wound up on the injury list and have been out for several weeks. Coach Marlin McQueen from Myosource Kinetic Bands - http://www.myosource.com - says that some of these injuries could have been prevented with better off-season training
04-07-2011 | Sports
Attorney Services, Legal Services and Resources
Will 2011 Be The Year Without An NFL Season?
Diehard football fans shudder to think of it. Television executives are scrambling to develop contingency plans. College football players are holding their breath in agony. Could the 2011-2012 NFL football season come and go without a single game being played? With 162 days remaining until Thursday night, September 8, the first game of the regular season is looking more and more in jeopardy with each passing day. During negotiations in late February
11-26-2010 | Sports
Thomson Sport
Thomson Sport Teams Up With NFL
Thomson Sport has signed a three-year sponsorship agreement to become Official Travel Partner of the NFL in the UK. As well as offering official NFL travel packages to European fans, commencing with Super Bowl XLV in North Texas on 6 February 2011, Thomson Sport will have comprehensive sponsorship rights relating to the NFL’s marks and key events such as the International Series at Wembley and the Super Bowl. In addition,
05-06-2008 | Associations & Organizations
The NeoSoul Trading Company
NFL VETERAN DRAWS UP NEW PLAY FOR DURHAM’S YOUTH
DURHAM, NC – National Football League Veteran Alvis Whitted has teamed up with The NeoSoul Trading Company to host a story time for children in Durham’s historic Northgate Mall. A Durham native and graduate of North Carolina State University, Whitted believes starting with his own community is the right thing to do. “I grew up in Durham just down the street from Northgate Mall,” Whitted said. “I recognize the challenges this
Comments about openPR
OpenPR is clearly structured and remains true to its principle of confining itself to the essential parts. OpenPR has proven to be a very good and reliable partner to our media agency: Within the shortest time the releases are online and go down well with the media representatives. The success of OpenPR is reflected in the steadily increasing number of press releases. It is good that OpenPR exists!
Ursula Koslik, Director Marketing & PR, F+W Hamburg