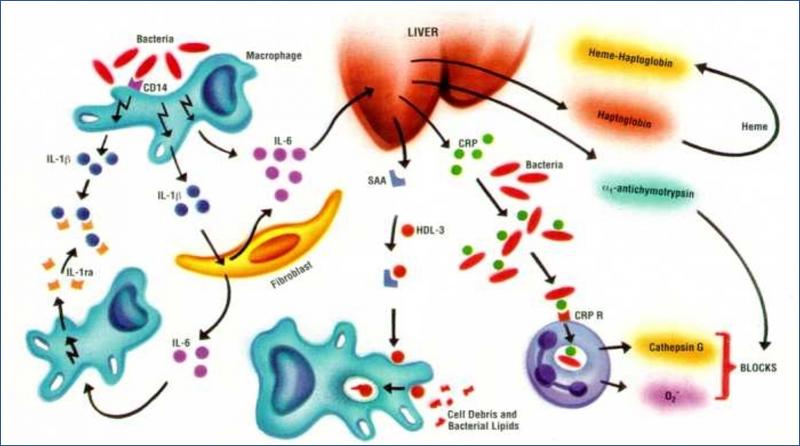 Interleukin-6 (IL-6), an inflammatory cytokine involved in various biological processes, ranging from immune system activation and hematopoiesis to inflammation and regulating oncogenesis by taking part in gene activation and cell proliferation, survival, and differentiation. The receptor for this ligand (IL-6) is composed of two subunits — an alpha subunit responsible for ligand specificity, and glycoprotein (GP) 130, a receptor that other cytokines in the IL-6 family share. The Ras-mediated and Janus kinase (JAK)–Signal Transducers and Activators of Transcription (STAT) pathways are activated because of the IL-6 ligand and its receptor binding. Get the report sample at: https://www.pharmaproff.com/request-sample/1222STAT3 and SHP2 [SH2 (Src Homology-2) Domain-containing Tyrosine Phosphatase] factors are phosphorylated by activated JAKs. The phosphorylated STAT3 forms a dimer and moves into the nucleus, where it activates the gene transcription of STAT3 response elements. These elements are important for G1-to-S-cell-cycle-transition signals and GP130-mediated cell survival. As the dysregulation of IL-6 signaling pathway leads to various cancers and dysimmune diseases, many anti-IL6 therapies are being developed. “Masked” antibodies, which are activated by disease-associated proteases, were recently developed by CytomX Therapeutics Inc. Similarly, Atlizumab (tocilizumab), an anti-IL6R monoclonal antibody (mAB), has also been tested for dysimmune diseases.IL-6 Inhibitors Therapeutics Pipeline DriverTechnological advancements have made it possible for pharmaceutical companies to develop better drug candidates in the IL-6 inhibitors therapeutics pipeline. These advancements have helped in developing drugs to be given as either single therapy or combination therapies. The development of specific target therapies with better drug delivery mechanisms has become possible because of this. For instance, one of BIOCAD’s drug candidates, BCD 089 is being developed using the BonMab technology platform for autoimmune disorder treatment.Detailed analysis at: https://www.pharmaproff.com/report/interleukin-6-inhibitors-therapeutics-pipelineOwing to the several benefits offered by the subcutaneous mode of drug administration, such as sustained and complete drug absorption, many companies are developing drugs to be given this way.  Vasoconstrictors, when administered subcutaneously, decrease the absorption of anesthetic agents, thereby prolonging its effect.IL-6 Inhibitors Therapeutics PipelineThe IL-6 inhibitors therapeutics pipeline was analyzed based on phase, route of administration, and molecule type. Based on phase, one among the total 18 drug candidates was in the Filed stage as of November 2017. Two drug candidates were in the phase III stage, five in Phase II, and one in the Phase I stage. Further, six candidates were in the pre-clinical stage and three in the discovery stage of development.Sirukumab, the drug in the filed stage of the Interleukin-6 inhibitors therapeutics pipeline, is being developed by GlaxoSmithKline PLC in collaboration with Janssen Biotech Inc. It was also under Phase II development for severe asthma and in Phase III stage for giant cell arteritis. IL-6 is involved in many autoimmune conditions, such as rheumatoid arthritis (RA), therefore to target it, the drug candidate is being developed as a human monoclonal immunoglobulin G-1 (IgG1) kappa antibody and IL-6 inhibitor, to be administered subcutaneously.For the treatment of RA, a drug being developed by R-Pharm Group — Olokizumab — was under Phase III development stage of the IL-6 inhibitors therapeutics pipeline. Its development is supported by the Nasonova Research Institute of Rheumatology, a leading Russian rheumatoid arthritis research institute. It is a humanized mAB that neutralizes GP-130 signaling by blocking the receptor signaling of the IL-6 complex. This drug was originally developed by a Belgian biopharmaceutical company, UCB Pharma S.A., which later gave the exclusive worldwide license to R-Pharm Group.With the involvement of IL-6 signaling pathway in the development of various diseases, the therapeutics pipeline for IL6 inhibitors is set to experience growth in coming years.Contact Us: Pharma Proff Toll-free: +1-888-778-7886 (USA/Canada) International: +1-347-960-6455 Email: enquiry@pharmaproff.com Web: https://www.pharmaproff.comAbout Us: Pharma Proff, is a frontline market intelligence and consulting solutions provider catering to the information and data needs of burgeoning sectors across the world, including pharmaceutical and healthcare. With meticulously curated research reports on the industry landscape, we empower companies in the healthcare and pharmaceutical sectors to make informed business decisions and base their marketing strategies with astuteness.

03-05-2020 | Health & Medicine
Pharma Proff
Interleukin-6 (IL-6) Inhibitors Analysis, Clinical Trails and Developments
Interleukin-6 (IL-6) inhibitors currently exhibit a proliferating pipeline with 25+ therapeutic candidates. IL-6 is a cytokine encoded by IL-6 gene, which helps in the maturation of B cells and is actively involved in the inflammatory response. The IL-6 protein is primarily produced at the sites of acute and chronic inflammation, where it is secreted into the serum and brings a transcriptional inflammatory response through IL-6? receptor. This protein is assumed to
03-05-2020 | Health & Medicine
Pharma Proff
Retinitis Pigmentosa Therapeutics Analysis, Clinical Trials and Other Developmen …
Retinitis pigmentosa therapeutics currently exhibits a proliferating pipeline with 25+ therapeutic candidates. Retinitis pigmentosa (RP) is a group of hereditary disorders that lead to the breakdown and loss of cells in the retina. Mutation in genes encoding the proteins required by retinal cells for their proper functioning, results in occurrence of RP. The disease results in partial vision loss during the earlier stage of the disease, which may lead to complete
07-26-2019 | Health & Medicine
Pharma Proff
Probiotics Therapeutics -Pipeline Analysis 2018, Clinical Trials & Results, Pate …
Probiotics are live microorganisms that produces beneficial effects in human gut. Probiotics can be taken as a dietary supplement. They prevent diarrhoea and help to reduce the symptoms of irritable bowel syndrome. Download the sample report at: https://www.pharmaproff.com/request-sample/1189 Probiotics comprise of a variety of microorganisms belonging to the Lactobacillus and Bifidobacterium groups. The only yeast probiotic that has proven to be effective is Saccharomyces boulardii. According to researchers, probiotics are effective in
07-26-2019 | Health & Medicine
Pharma Proff
Niemann-Pick Disease Type C (NPC) Therapeutics Pipeline to Witness Significant G …
Niemann-Pick disease is divided into four main types: type A, type B, type C1, and type C2. These types are classified on the basis of genetic cause and signs and symptoms of the disease. NPC is identified as a rare genetic disorder in which the body is unable to transport cholesterol and lipids inside the cells. This causes accumulation of these substances within various tissues of the body. These substances

05-30-2019 | Health & Medicine
Lipodystrophy Therapeutics- Pharma Proff
Lipodystrophy Therapeutics- Pipeline Analysis 2018 | Ionis Pharmaceuticals, Inc. …
Lipodystrophy is a rare medical condition which involves problems with fat production, usage, and storage. It is categorized into two types; congenital and acquired lipodystrophy. Download the sample report @ https://www.pharmaproff.com/request-sample/1077 Congenital lipodystrophies include congenital generalized lipodystrophy, familial partial lipodystrophy, and marfanoid progeroid lipodystrophy syndrome; while acquired lipodystrophy includes acquired partial lipodystrophy, acquired generalized lipodystrophy, centrifugal abdominal lipodystrophy, lipoatrophia annularis, localized lipodystrophy and HIV-associated lipodystrophy. Get the detailed analysis @ https://www.pharmaproff.com/report/lipodystrophy-therapeutics-pipeline-analysis The
05-27-2019 | Health & Medicine
Dravet Syndrome Therapeutics- Pharma Proff
Dravet Syndrome Therapeutics- Pipeline Analysis 2018 | Zogenix, Inc., Ovid Thera …
Dravet syndrome is a form of severe myoclonic epilepsy that occurs in infants during their first year of age. If left untreated, it can be associated with other types of seizures, and status epilepticus. Children having Dravet syndrome are generally observed with poor cognitive skills and hyperactivity. Download the sample report @ https://www.pharmaproff.com/request-sample/1098 It severely affects the person’s quality of life and around 10-20% of the patient are estimated to die due
04-18-2019 | Health & Medicine
Pontine Glioma Therapeutics-Pharma Proff
Pontine Glioma Therapeutics- Pipeline Analysis 2018 | Y-mAbs Therapeutics, Inc.
Pontine glioma is a malignant tumour which develops from the brain stem cells. Based on the grade of growth, it is categorized into anaplastic astrocytomas and glioblastoma multiforme (GBM). Download the sample report @ https://www.pharmaproff.com/request-sample/1117 Pontine glioma is more prevalent in children than adults. The common signs and symptoms of pontine glioma are squints, swallowing problems, slurred speech, facial weakness, abnormal gait, difficulty in writing and changes in personality and behaviour.
02-05-2019 | Health & Medicine
Transparecny Market Research
Rheumatology Therapeutics Market
Global Rheumatology Therapeutics Market: Snapshot A rising elderly population and increasing allocations for research and development of new drugs is what is serving to drive growth in the global rheumatology therapeutics market. This has led to the emergence of many new drugs. Their swift approvals by the appropriate authorities has also led to the growth in the market. A report by Transparency Market Research uncovers after in-depth study that the global rheumatology
07-07-2017 | Health & Medicine
Clinical Diagnostic Report By CMI
Bone Degeneration Therapeutics Market
Bone degeneration is characterized by deterioration of articular cartilage covering the joints. Cartilage aids free movement of the joint without any resistance. Reduction in flexibility of the joint due to deterioration of cartilage leads to inflammation, compressed nerves, and pain. Aging is one of the natural causes of bone degeneration, which is also fueled by several conditions such as injuries, congenital disorders, diabetes, and obesity. Symptoms of degenerative bone disorders
03-31-2017 | Health & Medicine
Persistence Market Research Pvt. Ltd
Global Dyslipidemia Therapeutics Market
Dyslipidemia is one of the metabolic disorder, which is described by unbalanced level and thickness of lipoproteins and triglycerides. The disorder also includes protein deficiency and over production. These disorders can be caused by increase in the serum total cholesterol, triglyceride concentrations, and low-density lipoprotein (LDL) cholesterol, and a decrease in the high-density lipoprotein (HDL) cholesterol concentration. These condition are mainly associated with cardiovascular or coronary heart disease. The other
Comments about openPR
Your portal is fast, simple, and easy to use. Others may have more functions but they also demand more editing time, you have to preformat the text in order to achieve a good result etc. I think openPR is really fantastic!
Andreas Knepper, wallmedien AG