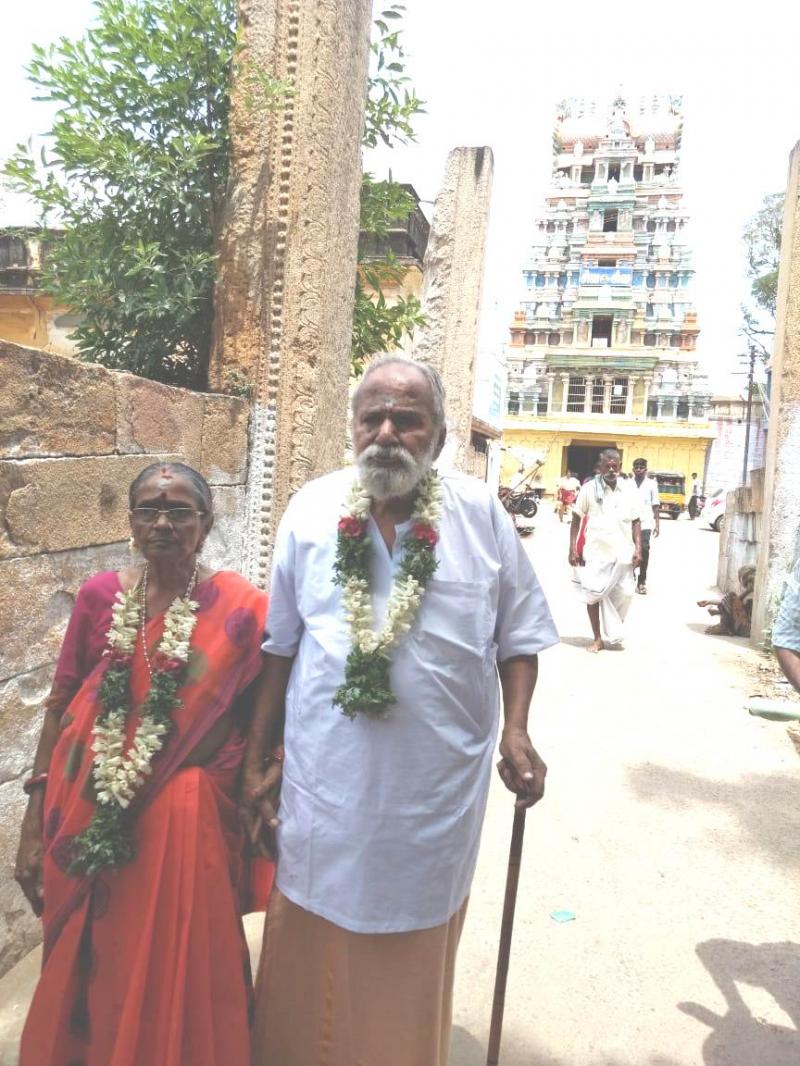 The highest happiness on earth is marriage and even though the order may vary for any given year, a wedding anniversary is invariably the celebration of love, trust, partnership, tolerance and tenacity. The diamond couple firmly believe that an anniversary is a time to celebrate the joys of today, the memories of yesterday, and the hopes of tomorrow. In UK the Queen from the Buckingham palace may be too happy to greet a couple celebrating their 60th, 65th or 70th and beyond wedding anniversaries In America, couples celebrating say Golden Jubilee of their wedding anniversary may be lucky to get greetings from the President of USA and similarly in countries like Canada, Australia etc. The tradition of celebrating a 60th anniversary is said to have come into being after Queen Victoria celebrated her Diamond Jubilee years of reign. With 60 years of marriage behind, there is little that they have not seen and this is indeed a great time to sit back and reflect on the time they had spent together, the things they have accomplished and the happiness they have shared. They got married on a bright Sunday morning 12 July 1959 at Uttamarkoil near Tiruchirapalli in Tamilnadu India. Trimurthy Sthal Uttamarkoil is famous for the temple which has all three gods Brahma, Vishnu and Shiva in one complex and that gives the rare status to this once upon time village which is slowly becoming more and more urbane in recent times. For this couple, sixty years back, the wedding was a noisy affair but the diamond jubilee celebration was indeed an unforgettable one. Sri Halasyam is a renowned architect and Vastu Sastri known all over Madurai for his expertise in the field. The world famous Madurai Railway station with Gopuram backdrop design team included him. They have four daughters and son each glittering with glory in their respective spheres of profession.Eldest daughter Booma with MSc Chemistry (Delhi University), MA Child Care & Education (Alagappa University Karaikudi), BEd (Rajasthan University) is Principal of a lead school Smt Jamuna Mishra Academy at Pilani Rajasthan. Booma is married to Dr BR Natarajan presently Professor at Banasthali World’s largest fully residential women’s University. The second daughter Gaurice Sanka aka Kalyani holds MCom (Madurai Kamaraj University) and with a flavor of Charted Accountancy, she is a well known go getter do gooder social worker in Goa. Kalyani is married to Dr BR Srinivasan who is Professor at Goa University. The third daughter Dr Srividhya holds LLM (CUSAT, Kochi Gold Medalist), MA Human Rights (Pondicherry University), PhD from Mumbai University and is Principal of VPM TMC Law College Thane. Srividhya is married to Sri Jayakumar Executive at Essar group. The fourth daughter Dr Hema holds BSc Nursing (AIIMS), MSc Nursing (SNDT Women’s University Mumbai), MA Public Administration (Madurai Kamaraj Uniersity), MBA Education Management (Alagappa University Karaikudi) and PhD (Madras University) and is Principal at Faculty of Nursing Dr MGR Educational and Research institute University Chennai. Hema is married to Sri Suresh Executive at HPCL Chennai. The only son Dr Viswanatha Prabhu a former Major of Indian Army Medical Corps deployed at Kargil during conflict and recipient of Tamil Nadu Governor prestigious Best Performance Award holds MBBS from Davangare, is presently enior Assistant Surgeon at Elumalai Government Hospital near Madurai. Daughter in Law Dr Vidhya Prabhu who holds MBBS MS is teaching at Madurai Medical College. To mark the milestone jubilee of wedding, children and grand children of the diamond couple planned surprise celebrations on 12 Jul 2019 at Madurai. Daughters Booma from Pilani and Kalyani from Goa and granddaughter Pooja Natarajan all the way from Mumbai despite a busy schedule at AZB landed at Madurai. Son Dr Prabhu and daughter in law Dr Vidhya and granddaughters Ms Tejasvi and Ms Vedashree at Madurai had worked out the master plan for the celebrations. The celebrations started with darshan and puja at Muktheeswarar Temple Madurai said to be 1000 – 2000 years old. It is noteworthy that for about twenty minutes, the sunrays fall on the presiding deity during March 10 - 11 and 22 - 23 and September 18 – 20 each year. Another specialty of this temple is that the miracle deeds of Lord Shiva known as Thiruvilayadal have been beautifully sculptured on various pillars. This was followed by visit to the ancestral village of the Sastrigal family Thirupuvanam where the said to be 1000 – 2000 years old famous temple of Lord Shiva as Pushpavaneswarar aka Poovananathaswami considered 16 times holier than Kasi is located. The temple priests performed special puja for the couple and honored them with garlands worn by the Lord himself. The special lunch spread of highly popular Kadampas Le Traditio of Madurai indeed was mouth water harvesting for the celebrations. The evening had cake cutting session followed by a yadon ki barat over the years. There were many more dear ones for the diamond couple but they were all nowhere near, as they were far away in different parts of India as well as spread across the globe from Australia through Malaysia to America. As they day progressed, the diamond couple continued to receive phone calls, emails, messages from friends and relatives all over both to greet and seek blessings on this rare occasion.When you hear this diamond couple saying that their wedding was very many years ago but the celebration continues to this day, everyone has no option but to get inspired and the nation and society can be assured that the institution of marriage in India today is in safe hands.Prof BR Natarajan Freelancing Cyber Journalist C/O JMA Pilani Rajasthan 333031 India Email: brnatarajanbits@gmail.comMadurai Chronicle focuses on factual written account of important or historical events in the order of their occurrence at Madurai.

05-26-2020 | Advertising, Media Consulting, …
Ample Market Research & Consulting Private Limited
Nursing Education Market Can Become Bigger in Five Years? Key Players Duke Unive …
The Nursing Education Market Research Report aims to provide insights that strongly demonstrate the market structure, scope, history, potential, and development perspective. By crossing through the historical and present market status, the Nursing Education market report provides authentic and reliable estimates for the forecast period. The report presents the market competitive landscape and consistent in-depth analysis of the major vendor/key players in the market along with the impact of economic
05-05-2020 | Health & Medicine
The Research Insights
Nursing Education Market Research Report 2020-2027| Duke University, Johns Hopki …
An informative data report titled Nursing Education Market was published by The Research Insights. It takes a closer look at the different aspects of the businesses, that are responsible for fueling the growth of the companies. Additionally, it offers some significant factors, which are restraining the progress of the industries. Primary and secondary research techniques have been used by analysts to study the data effectively. The global market is estimated
02-01-2019 | Science & Education
KLE Technological University
KLE Technological University partners with Coventry University, UK
KLE Tech, in its endeavour to create better learning environments to students and giving them multi-cultural exposure, has entered into a MoU with Coventry University (www.coventry.ac.in), one of the leading universities of United Kingdom. Prof.Ashok Shettar, Vice Chancellor signed the MoU with Prof.Richard Dashwood, Deputy Vice-Chancellor (Research) of Coventry University on October 08, 2018. As per this MoU, both Universities would be collaboratively working in the areas of research, faculty development
06-08-2017 | Science & Education
Banasthali
Banasthali Vidyapith – University for Women & University with a Difference
Every educational institution in India today has a name but only very few like Banasthali have a legacy. The evolution of Banasthali is nothing short of a fairy tale in which the parents freedom fighter and Gandhian Pt Hiralal Shastri and Padma Bhushan & Jamnalal Babaj Award winner Smt Ratan Shastri took up the mission with passion for setting up an institution at Banasthali to fulfill the desire of their
02-01-2011 | Advertising, Media Consulting, …
IMM Interactive
COPEAC UNVEILS “COPEAC UNIVERSITY”
COPEAC Affiliate Network Launches Exclusive Education Portal Woodbury, NY (January 26, 2011) – COPEAC, IMM Interactive’s exclusive affiliate network, is one of the largest and most respected performance-based ad networks in the digital advertising sector with over 40K publishing partners. For these partners, COPEAC is offering an exclusive education tool called COPEAC University; an online education portal with valuable resources for success in Affiliate Marketing. Offered exclusively for COPEAC members, COPEAC
06-17-2010 | Science & Education
Global Academy Online, Inc.
University of South Africa, Number One Online University in Africa
According to the 2010 edition of the Best Worst Online Degree Programs, the University of South Africa is ranked the number one online degree provider among Africa’s 53 nations. The University of South Africa’s vision is to be Africa’s premier distance learning institution. It would appear, according to the e-book that they have succeeded. The university’s roots go back over 130 years. The Division of External Studies was created
Comments about openPR
We publish our press releases on openPR.de because we like people who are "open" - just like us.
Frank Obels, CEO, INCONET - Informationssysteme, Communication und Netzwerkberatung GmbH