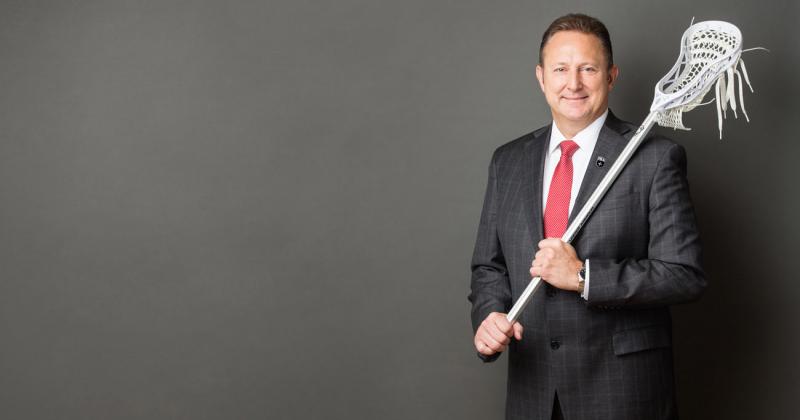 The National Lacrosse League (NLL) Board of Governors, announce the contract extension of Commissioner Nick Sakiewicz. Sakiewicz took over the role in 2016, and the league, its players and its partners have experienced unprecedented growth under his tenure. The contract extends through the 2022 season.“Over the past three years Commissioner Sakiewicz’s leadership of the NLL enterprise and his strategic vision for professional lacrosse has produced unprecedented fan engagement, franchise growth and exceptional commercial results for our League and the game of lacrosse. His many years of experience with Major League Soccer’s incredible journey to success has provided the National Lacrosse League with a similar blueprint for professional sports relevance,” said Brad Brewster speaking on behalf of the NLL Board of Governors. “Looking forward the owners of our 13 team league - which now includes five NHL and two NFL owners, NBA, WNBA, and MLS ownership - are excited to again work closely with Nick to continue the remarkable growth in the level of fan interest, sponsorship and media rights opportunities and quality franchise expansion for the NLL.”“I want to thank the board for having the faith in me to continue on in a role which I enjoy and in a sport which has nothing but growth potential, both in North America and around the world,” Sakiewicz said. “While we have made great strides in all areas of the business and the competition, I believe our best years are ahead and we are just at the beginning. I’m looking forward to continuing to lead such a tremendous group of players, owners, coaches, and partners collectively.”Under his leadership, the NLL has experienced substantial growth, including a landmark partnership with Turner Sports and Bleacher Report Live, aligning with major brands to enhance the fan experience, and increasing ticket sales across the League’s U.S. and Canadian footprint. The NLL has added four new owners and four new teams in the course of two years and is on pace to selectively expand again in the next few years, with 2019-20’s new markets being New York and Halifax, Nova Scotia, the league’s fifth Canadian franchise. Some of the highlights of NLL’s growth under Sakiewicz include:AttendanceTotal announced attendance across the league this past season was 958,547, a 28% increase 60% of the NLL’s ticket sales come from people who never picked up a lacrosse stick Media - Turner & B/R LiveAverage unique viewers STD (+27% YOY) Average minute audience STD (+14% YOY) Total unit sales (+151% YOY) SponsorshipRecent partnerships include: GEICO Michelob Ultra US Lacrosse USBOXLA GEICO and Michelob are first class non-endemics Projecting a 29% increase from 2018 to 2019 – year over year growth in sponsor revenues CauseExpanded the league’s diversity programming in partnership with US Lacrosse, including requiring players and staff to take a cultural competency course. Labor RelationsNegotiated a new Collective Bargaining Agreement with the Professional Lacrosse Players Association (PLPA) and closed a multi-year deal. Led State of the Union player meetings in each market and continues his commitment to conceptualizing player input with the introduction of a players business summit. Sakiewicz joined the National Lacrosse League as Commissioner in 2016 after spending more than two decades at Major League Soccer (MLS). Prior to joining the NLL, he served as founder, operating partner and CEO of Keystone Sports and Entertainment, the ownership entity of the MLS’ Philadelphia Union. He led negotiation efforts to develop one of the MLS’ most favorable soccer-specific stadium deals, paving the way to officially announce the Union’s inaugural season. His career highlights include launching MLS as a founding executive, managing two inaugural teams, building two soccer-specific stadiums, launching an expansion team and raising over half a billion dollars in investment capital, stadium funding, sponsorship and ticket sales.National Lacrosse League, 325 Chestnut St, Suite 700, Philadelphia, Pa 19106About the National Lacrosse LeagueThe National Lacrosse League (NLL) is the world’s premier professional lacrosse league. Founded in 1986, the NLL ranks third in average attendance for pro indoor sports worldwide, behind only the NHL and NBA. The League is comprised of 13 franchises across the United States and Canada: Buffalo Bandits, Calgary Roughnecks, Colorado Mammoth, Georgia Swarm, Halifax Thunderbirds, New England Black Wolves, New York Riptide, Philadelphia Wings, Rochester Knighthawks, San Diego Seals, Saskatchewan Rush, Toronto Rock, and Vancouver Warriors. For more information, visit NLL.com and find the NLL on Facebook, Instagram and Twitter.

12-11-2019 | Sports
National Lacrosse League
NLL, B/R Live to Offer Live 'Game of the Week' Available for Free Across B/R Liv …
The National Lacrosse League (@NLL), the largest and longest-standing professional lacrosse league in the world, and its global media partner B/R Live today announced a wider expansion of NLL live game coverage across multiple platforms, with the launch of the NLL “Game of the Week” streaming for free across B/R Live domestically and Twitter and Facebook worldwide. The streams will be available to global audiences starting Saturday, December 14,