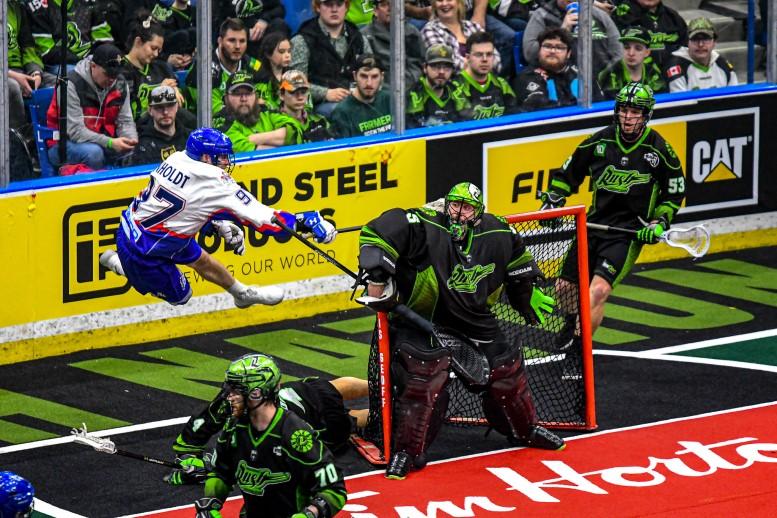 The National Lacrosse League (@NLL), the longest running professional lacrosse league in the world, today announced a milestone 5-year partnership with Wolf Athletics (@WolfAthletics). Extending through the 2025 Season, Wolf Athletics has been named as The Official Goal of the League, as well as an Official Equipment Sponsor.  “We are genuinely excited to be collaborating with a company like Wolf Athletics for their professionalism, sheer drive, and engineering savvy they are bringing into the National Lacrosse League. Our goal is not only to be working with the best brands in lacrosse, which Wolf has already proven they are, but to work to advance the sport to a new level through innovation, creativity, and development,” said Kevin Morgan, Executive Vice President & Chief Revenue Officer at the National Lacrosse League. “With Wolf Athletics, not only do all our elite athletes have the opportunity to play with the most advanced technology in equipment, but our League has gained a very progressive partner to improve opportunities for life-long NLL fans and future fans and the players..”   “There were a lot of conversations beginning last year, that have gotten us to this point that we are today in signing a comprehensive 5-year deal with the NLL,” said Wolf COO, Scott Brown. “We were interested in becoming more than an equipment partner with the League, as we felt we had much more to offer in a forward-thinking collaboration, as true strategic partners. Wolf Athletics and the NLL are dedicated to making a meaningful difference to the sport as a whole, continuing to grow Lacrosse from its emerging sport status, to being widely recognized alongside the other major sports such as the NBA, NFL, NHL, and MLS in North America and Internationally, as Lacrosse has sights on the 2028 Olympic Games.”    Strategic Partner - A Brand New Goal Under this new partnership, Wolf Athletics’ first major endeavor, alongside the NLL’s Board of Governors and Competition Committee, league office, and individual teams and players, will be to collaborate to redesign the official game goal. This will involve significant research and development, and its introduction into the NLL is subject to Board of Governors approval.  “The strategic objective for this advancement in redesigning the game goal, after decades without major advancement is multi-faceted. We will be looking to create a modern look, improve the vision for players, referees, broadcast, and fans, which creates more dynamic and exciting play, while dramatically improving game-play consistency and generating new revenue opportunities for the league,” states Brian Lemon, EVP Lacrosse Operations at the NLL.   The NLL looks forward to years of meaningful co-development efforts alongside Wolf Athletics, bringing exciting and valuable advancements to the NLL and throughout the lacrosse industry.     Wolf Athletics - Engineering Lacrosse Wolf Athletics just does things differently than everyone else. They have shaken up the industry by creating record setting Lacrosse equipment (strongest shaft in production, Guinness World Record Fastest Shot) that helps improve every player’s game, from the first-time beginner to the very best in the world through engineering equipment designed specifically for the mechanics of lacrosse. The brands’ technological advancements extend well beyond industry standards and conventional designs. Leading the pack in innovative organizations, Wolf Athletics promotes autonomy, innovation, and creativity, and maintains a work environment that both challenges and allows for growth and improvement.    Wolf Athletics also serves as an Equipment Partner and is both The Official Ball and The Official Goal of the Premiere Lacrosse League. Wolf Athletics’ headquarters is based in Wilmington, NC. To learn more about Wolf, follow them on Social Media Facebook, Instagram, Twitter, or visit www.wolf-athletics.com     .325 Chestnut Street, Suite 700 Philadelphia, PA 19106 Jerry Milanijerry@Jerrymilani.com973-566-0870About the National Lacrosse League Founded in 1986, the National Lacrosse League (NLL) is the longest running and most successful professional lacrosse league, ranking third in average attendance for pro indoor sports behind only the NHL and NBA. The League is currently comprised of 14 franchises across the United States and Canada: Buffalo Bandits, Calgary Roughnecks, Colorado Mammoth, Fort Worth NLL (to begin play in 2021-22), Georgia Swarm, Halifax Thunderbirds, New England Black Wolves, New York Riptide, Philadelphia Wings, Rochester Knighthawks, San Diego Seals, Saskatchewan Rush, Toronto Rock, and Vancouver Warriors.According to recent research, the NLL fan is younger (average age 46) than almost every North American professional sports league. Almost sixty percent of its fans come from a non-lacrosse fan base, while the general lacrosse fan has become more engaged than at any point in the history of the league. Most importantly, NLL fans are extremely passionate and engaged, with 58% of NLL fans identifying their favorite NLL team as their favorite sports team. Focusing on a digital first strategy, every NLL game is distributed on Turner’s B/R Live streaming service available on desktop, iOS, Android, and connected devices. The NLL Game of The Week broadcast is available on Facebook and averaged over 160,000 unique viewers per game last season.For more information, visit NLL.com and find the @NLL on Facebook, Instagram and Twitter