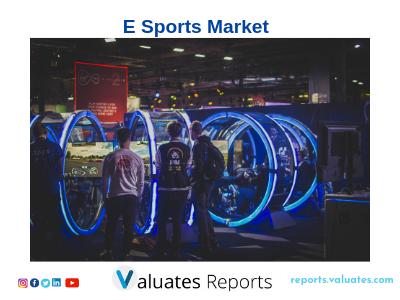 Esports is a potential market for the global gaming industry and it is experiencing a steady growth that is mainly driven by cloud gaming and mobile gaming. With the proliferation of smartphones with more and more processing power coupled with 5G network gaining popularity, Esports is expected to grow with a CAGR of ~20% in the years between 2019–2025. In the same period, the gaming industry is expected to be more interactive and streaming based. The countries that generate a major portion of the revenue in gaming industry include China, Japan, US, Germany, South Korea, France, Canada, and UK.
Global Esports market is expected to cross $3 billion by the end of 2025 due to growing popularity of Esports worldwide and the growing support of game publishers for Esports

View full Report: https://reports.valuates.com/sreport/INFO-Othe-3Q37
Esports is a form of videogame competition event which is organized online or offline. Esports is gaining huge attention with many gaming events being telecasted on social media and streaming sites including YouTube and Twitch. Esports market is expected to cross $3 billion by the end of 2025 with major competitions occurring in games like Dota 2, Fortnite, and League of Legend. Real Time Strategy (RTS), Massive Online Battle Arena (MOBA), and First-Person Shooter (FPS) are the most common type of game genres witnessed in most of the Esports events.
The popularity of Esports have increased since 2010 with a greater number of revenue streams arriving in the form of merchandising and corporate sponsorships apart from traditional revenue streams like broadcasting rights of the event and tickets to the event. As of 2019, game streaming platform -Twitch is one of the major broadcasting mediums for Esports. Esports events including E LEAGUE Major, Genesis, Evo Japan, and WESG which generates more viewers for video game streaming platforms. Also, Esports events are providing more prize money for winners due to growing revenue streams.

Get a Free Sample: https://reports.valuates.com/request/sample/INFO-Othe-3Q37/Global_Esports_Market

Based on the geography, the Esports market is split into North America, Europe, APAC, and RoW. RoW includes Middle East, South America, and Africa. North America is the leading revenue generator in the global Esports market with a major share of the market contributed by the US. North American market for Esports is mainly driven by growing number of audiences for Esports and APAC is one of the fastest growing market in the global Esports market with major growth being witnessed in China, Australia, South Korea, Taiwan, and Japan.
Based on revenue model, the global Esports market is segmented into advertisement, sponsorship, media rights, and others. Others include game publisher fees and revenue generated from the sales of ticket and merchandise. Advertisement and sponsorship accounted for the major part of the revenue generated by the Esports market in 2018.
Based on audience, the global Esports market is segmented into regular viewers and occasional viewers. Regular viewers include fans and hardcore game enthusiasts who watch Esports regularly. As of 2019, regular viewers accounted for a major share in the market.
Based on gender, the global Esports market is segmented into male viewers and female viewers. As of 2019, male viewers especially those within the age group of 20–35 accounted for a major part of the market share.
Esports market is primarily dominated by major companies which organize Esports events and game publishers. Some of the major vendors in the market are Cloud9, Team SoloMid, Team Liquid, Epic Games, Valve Corporation, Activision Blizzard, and Echo Fox. Other prominent vendors in the market include Fnatic, Gen.G Esports (formerly KSV Esports), 100 Thieves, G2 Esports, Immortals, Envy Gaming, Counter Logic Gaming, Nintendo, Tencent, Hi-Rez Studios, and EA Sports. The market is expected to witness an increase in the number of audience and tournaments in the forecast period which may lead to a greater number of vendors (including game publishers and gaming organizations) entering in the market.
Global Esports market will grow at a CAGR of nearly 20% during the forecast period 2019–2025. The aim of this report is to define, analyze, and forecast the Esports market based on segments, which includes revenue model, gender, audience, and region. In addition, live game streaming market report helps venture capitalists in understanding the companies better and make well-informed decisions and is primarily designed to provide the company’s executives with strategically substantial competitor information, data analysis, and insights about the market, development, and implementation of an effective marketing plan.

Our aim is to collate unparalleled Market insights and notify our customers as and when it happens. Valuates is curating premium Market Research Reports from the leading publishers around the globe. We will help you map your information needs to our report repository of Market research reports and guide you through your purchasing decision. We are based out of silicon valley of India (Bengaluru) and provide 24/7 online and offline support to all our customers and just a phone call away.

You can edit or delete your press release Global Esports Market – Drivers, Restraints, Opportunities, Trends, and Forecast up to 2025 by Valuates Reports here

12-24-2020 | IT, New Media & Software
Valuates Reports
Cloud Fax Market Size, Share, Growth, Trends, Segments, Forecast | Valuates Repo …
Cloud Fax is a simple, cost-effective cloud-based alternative to traditional fax machines and servers. Suitable for organizations of all sizes, it provides a streamlined faxing process, while substantially lowering your overall faxing costs. It lets you send and receive faxes to and from anywhere in the world via email and is fully compatible with all email platforms. It is secure, reliable and eliminates the need for fax machines, toner, paper,
12-21-2020 | IT, New Media & Software
Valuates Reports
VCSEL Market Size , Share, Trends, Growth, Forecast, Analysis | Valuates Reports
The global VCSEL market size is projected to reach USD 2996.8 Million by 2026, from USD 1730.7 Million in 2020, at a CAGR of 9.6% during 2021-2026. Major factors driving the growth of VCSEL market size are, increasing applications of VCSELs in data communication, growing adoption of 3D sensing applications in smartphones, technological advancements, increasing interest of OEMs to adopt VCSELs in consumer devices, and the use of VCSELs in the
12-21-2020 | Fashion, Lifestyle, Trends
Valuates Reports
Hand Sanitizers Market Size USD 4362.9 Million by 2026 at CAGR 4.7% | Valuates R …
Hand Sanitizers Market Size USD 4362.9 Million by 2026 at CAGR 4.7% | Valuates Reports The Hand Sanitizer Market is Segmented by Product Type (Foam, Soap, Gel, Spray, Others), by Application (Individuals, Education, Office Buildings, Health Care, Food Handling, Hotel, Other), Key Vendors and Regional Growth: Global Opportunity Analysis and Industry Forecast, 2021–2026. This report is published on Valuates Reports in the Cleaning Agents Category. The global Hand Sanitizer market size
12-17-2020 | Advertising, Media Consulting, …
Valuates Reports
Over the Top Market | OTT Market Worth USD 1,039.03 Billion by 2027
The global OTT market size was valued at USD 121.61 Billion in 2019 and is projected to reach USD 1,039.03 Billion by 2027, growing at a CAGR of 29.4% from 2020 to 2027. Ad-supported VoD platforms is experiencing strong growth in ad revenues, thereby making the advertisement-based revenue model popular amidst the COVID-19 pandemic. For instance, five of the major ad-supported streaming platforms such as Hulu, Peacock, Roku, Pluto TV and