New Creative FX trend is off the wall 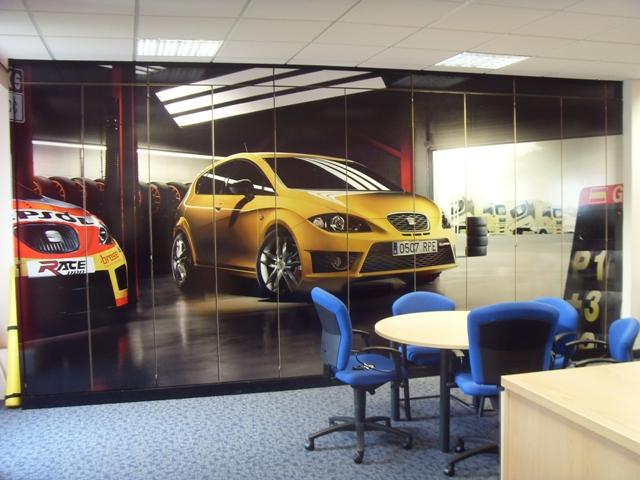 A new trend in interior design has taken off: wall ‘wrapping’. The application of adhesive vinyl to walls has become increasingly popular, to decorate offices and shops and signage and display specialist, Creative FX, has seen a sharp rise in demand as a result.Car manufacturer, SEAT, recently had its office walls and cupboards wrapped in images of its own cars. “We’ve extended our brand identity in to the office,” says SEAT National Communications Manager, Robert Taylor, “And customers and staff love it - it’s made the office a much more interesting place to be.”Wall wraps are being used by companies throughout the UK either as part of their promotional activity, to reinforce their corporate identity, or even just to brighten up their offices. Sean Davis, Director of Creative FX, believes the appeal of this new trend is its flexibility, requiring little or no maintenance, and being quick and easy to install and remove. “It allows you to personalise your shop or office, with no more effort than putting up a poster,” he says. “And they can be printed in any design a company likes – using the company ID, photography or even hand-drawn designs,” he says.With the use of outdoor inks, vinyl is also suitable for external use, and can be applied to more difficult surfaces, including corners and recesses.Creative FX has seen its business grow substantially since it was founded over twenty years ago. “Things have come a long way since the days of putting go-faster stripes on cars,” says Davis. “Vinyl wrapping has really taken off and we’re now wrapping everything from commercial vehicles to cupboards, and tables and chairs, to brick walls. Some of our customers even want vinyl wraps in their homes.”About Creative FXCreative FX is a Bromley-based company specialising in vehicle livery and automotive services, as well as signage and display projects.We specialise in the design, production and installation of vehicle wraps for both the commercial and retail sectors. Any design can be used from simple text and logo to a fully photographic vehicle wrap. We also provide stoneguard and window tinting services.As well as wrapping individual vehicles, the Creative FX team has also carried out projects for major car manufacturers, and has completed numerous special commission projects for events and charities, such as: Arsenal FC (Teenage Cancer Trust); Audi (the featured sculpture at the 2009 Goodwood Festival of Speed); Nissan (163 Union Jack-wrapped Micras, for the Government vehicle scrappage scheme): and an Electric G-Wiz, sold by Gordon Ramsay at a charity auction for nearly £50,000.Creative FX is an authorised supplier of vehicle badging for a number of leading car manufacturers including Audi, Toyota GB and Renault UK.Sean Davis, Director Creative FX145 Masons Hill Bromley Kent BR2 9HW+44 (0) 20 8313 1146 info@fxuk.net www.fxuk.net