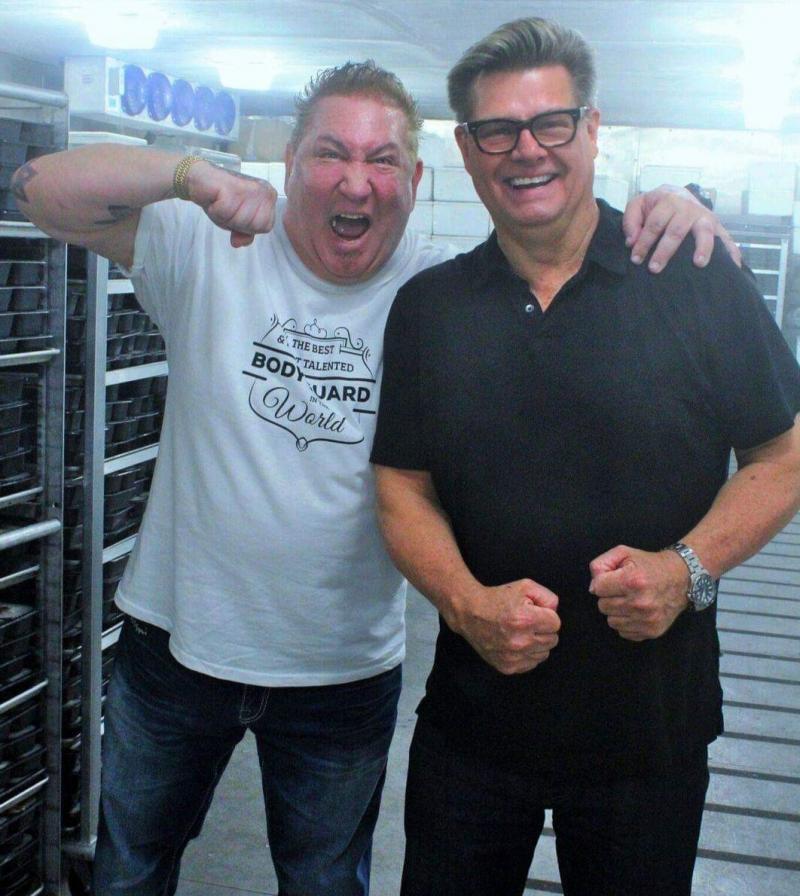 Rob Kardashian just responded back to Jenner's Charity Boxing Challenge to fight for "The Honor" of the Kardashian/Jenner Names.

"Rob just got back to us and says that he defiantly wants to do this, but..."said MMI PRMedia Group Vice President of Social Media J. Daniels.

Rob says "I just started to get back into shape both mentally and health wise. I've seen what this guy can do 10 years ago, he's no joke and he's kept active ever since, so he must have gotten 10 times better since. I'm no where near my old boxing weight orshape that I was back in 2009, and in no way near the shape I need to be in to box this guy at this time". "I would like to do it sometime maybe in April of 2020 whenI'm in better shape, and in LA".

Rob continued to say "I'm Totally up for this but said (Momager) Kris said NO to the whole thing cause there was nothing in it for her or me, even though it was for Charity. She says I must get a $150,000 Appearance Fee and she wants a $100,000 Manager Fee,if not then she wont allow nor approve it!".

Bruce (Mark) says "What a Fuckin Joke! So let me get this straight- Mommy wants $100,000 & Baby Boi needs to get $150,000 to fight (get his ass whipped) by the the former Celebrity Bodyguard Mark Behar for the honor of their own name! Don't these people careabout anything or anyone but themselves? Its a freakin Charity Event, not a PPV event with A Purse to be awarded to the Winner. God I hate Ugly people like this, it just goes to show you who they really are and what they have always really been about sinceday one".

Lets see if maybe Dana White or Damon Feldman can negotiate this & make it happen!! If not, lets see if Keanu wants to "step up & step into the ring" to fight & raise funds needed for these desperate and growing causes.

05-26-2020 | Leisure, Entertainment, Miscel …
MMI PRMedia Group
Hollywood Celebrity Bodyguard Says "I SHOULD BE JOE GIUDICE 1.st OPPONENT!"
As both Mike Tyson & Evander Holyfield are NOW coming out of their respected retirements as former "All Time" Heavy Weight Boxing Champions, they both are a bit older but are still in the best shape of their lives to make a statement that they still have it & what it takes to make a come back and fight again with a rematch fight currently is in the works. Now
04-06-2020 | Leisure, Entertainment, Miscel …
MMI PRMedia Group
Hollywood's Busiest and Best Are Hurting & Shut Down Do To The Coronavirus
Hollywood, CA- April 3, 2020 -- Exclusive Interview- Mark Behar is an example of one of those in the busy & fast paced Hollywood Entertainment Industry that is currently completely "Shut Down". Mark has been on the top of many Hollywood lists since 2000. He is Hollywood's most sought after, most successful and one of the highest paid Celebrity Bodyguard/Personal Protection Specialist in the world. He's looked over and has protected the lives
07-05-2019 | Leisure, Entertainment, Miscel …
MMI PRMedia Group
An American Flag/4.th of July Tribute Decribed by Robin Williams set to go Viral …
A video tribute of The American Flag & the true meaning of what the American Flag stands for through the words of the late & great Robin Williams is set to go viral by a tribute to the American Flag by the late actor/comedians friends and Bodyguard. Mark Behar (now Legally known by another 1 time great American) n/k/a Bruce Jenner just found this video of Robin Williams tribute to the

02-24-2021 | Arts & Culture
Media Mogul News
Rob Potna’s Brother Fatally Shot In Camden, NJ
Talented rapper, Rob Potna’s Brother, Jimel Quann, shot in a fatal shooting in Camden County Rob Potna is not having the best of times at the moment, as he recently made the headlines for an undesirable and rather unfortunate event, following the death of his brother, Jimel Quann. Authorities in Camden County are currently investigating the fatal shooting of 44-year-old Jimel Quann, the oldest brother of hip hop artist Rob Potna
10-01-2018 | Industry, Real Estate & Constr …
V3
Rob Coulson awarded prestigious real estate designation
Rob Coulson has been awarded the CRE® (Counselor of Real Estate) credential by The Counselors of Real Estate®, an international group of high profile real estate practitioners who provide expert advisory services to clients on complex real property and land-related matters. The credential was awarded in May at the Counselors’ 2018 Midyear Meetings in Chicago. Mr. Coulson is an entrepreneur, trusted advisor, and partner to investors, owners, and
11-08-2017 | Business, Economy, Finances, B …
Employees Only
Rob Seale Joins the Employees Only Team
Rochester, Mich. Nov. 8, 2017 – Employees Only (EO), a human resources consulting and benefits management firm, has named Canton resident Rob Seale General Manager. In this position, Seale will be responsible for managing interaction with clients and the EO sales team. Seale, a graduate of Ferris State University, brings over 15 years of human resources outsourcing, PEO and operational experience to Employees Only. In his most recent position, he
06-20-2016 | Arts & Culture
Mixer Rob Chiarelli Enjoys Two #1 Hits
Mixer Rob Chiarelli Enjoys Two #1 Hits
This week, GRAMMY� winning mix engineer Rob Chiarelli has been enjoying two #1 hits. According to Billboard magazine, "This One's For Me and You" has been at the top of the Urban Adult Contemporary Charts for the last 4-weeks. The song was produced and written by GRAMMY� nominated producer Gregg Pagani and mixed by Chiarelli at Paramount Studios in Hollywood, California. Chiarelli also mixed the #1 Gospel/R&B song "Wanna Be Happy?"(RCA Records/Fo
10-01-2013 | Science & Education
SABIC Polymers
Rob Duchateau wins DPI Invention Award 2013
Scientific output and polymers knowledge On 20 June 2013 Rob Duchateau (47), Chief Scientist at SABIC and part-time Associate Professor at the Technical University Eindhoven (the Netherlands), received the DPI Invention Award 2013. Jacques Joosten of the Dutch Polymer Institute handed out the award during the biannual conference of the European Polymer Federation (EPF) in Pisa, Italy, from 16 to 21 June 2013. The award was granted for Duchateau’s scientific output
01-27-2012 | Business, Economy, Finances, B …
OSE European Limited
2 Years at OSE for Rob Cornell
Over 2 years ago Robert Cornell started out at OSE as a young apprentice having secured the position through the ITEC apprenticeship group. Robert was the first apprentice taken on by OSE, however since then OSE have enjoyed a very successful relationship with the ITEC group. OSE, a North East based Transport and Logistics Company with international coverage, place considerable importance on employing local talent and giving back to the community.
Comments about openPR
OpenPR is clearly structured and remains true to its principle of confining itself to the essential parts. OpenPR has proven to be a very good and reliable partner to our media agency: Within the shortest time the releases are online and go down well with the media representatives. The success of OpenPR is reflected in the steadily increasing number of press releases. It is good that OpenPR exists!
Ursula Koslik, Director Marketing & PR, F+W Hamburg