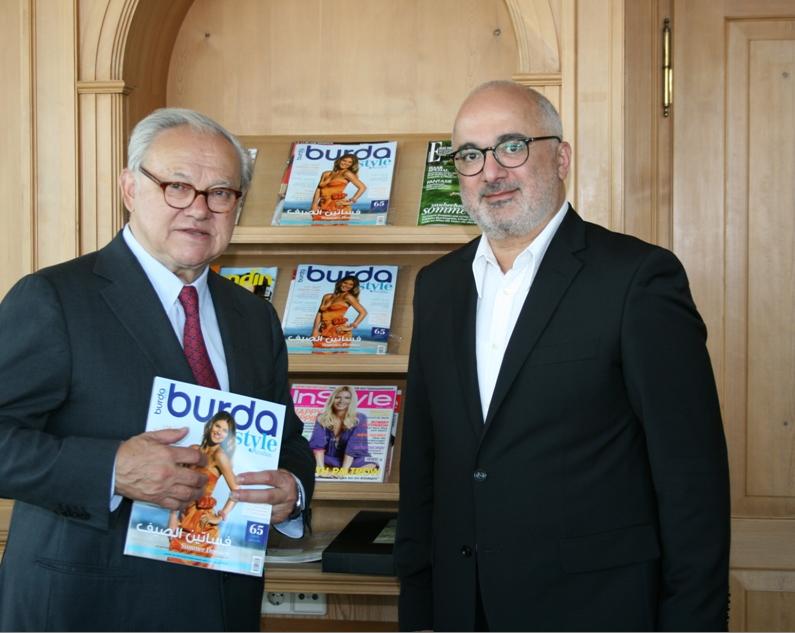 Burda Style Arabia, a combined English and Arabic version of the hugely popular European fashion title Burda Fashion, which has been in operation since 1950 and is published in 90 countries and 17 languages, is now on sale throughout the GCC, Egypt and Levant.Produced by independent film, television, digital and publishing company, Takhayal Entertainment, the monthly fashion title will also have four additional special editions – Plus Sizes, Kids, Teenagers and Weddings.Burda Style Arabia is a fashion magazine with a difference, with each edition featuring patterns for those who prefer to make their own clothes or have the latest designer styles tailored. Particularly popular in Germany and Russia with women who sew and replicate clothing as a hobby, the publication focuses on designer fashion and current styles.Takhayal’s Entertainment’s chairman, Youssef El Deeb, flew to Germany to meet Hubert Burda Media’s owner, Dr Hubert Burda, publisher of over 250 magazines worldwide, to finalise the deal, which will see the magazine appear in the region for many years. El Deeb says: "We met at Burda’s offices in Munich to finalise the long term plan of Burda Style Arabia and learn more about his vision for the brand. Since taking over the family business Dr Burda has taken the company forward, repositioning the magazine from one bought by people forty-plus years ago who needed to make their own clothing - to one read by those who like to create their own fashion as a sign of individuality.“The magazine must have been one of most anticipated launches this year, with hundreds of Burda fans calling in to us every week since the beginning of the year to ask about availability in the region. We are quickly building circulation in the region as it proving extremely popular for a specialist publication, with over 15,000 copies sold in its first month.“Like many children growing up in Egypt and Lebanon, there was always a German edition of Burda lying around the house before there was as much access to ready-to-wear clothes. I’d regularly see frayed and worn-out German editions of Burda shared by five or six families before eventually being grudgingly discarded. “This isn’t a celebrity fashion magazine where you discover which celebrities are wearing what each week before throwing it out. It has up-to-date tips, patterns and knowledge that anyone who enjoys making their own clothes or having their own unique styles produced will keep to look back on and learn from.“Of course the magazine has moved with the times and is now a top fashion publication in its own right, but will always be particularly popular with those who enjoy producing their own clothes. Many Arab women in particular, often due to cultural reasons, prefer to have their own clothes tailored by their own seamstress to suit their preferences."Dr Hubert Burda, says: “The time was right for our move into the Middle East and it’s the perfect region for us to create communities of people who like to sew and create their own fashion. “The sense of community is particularly strong throughout Arab countries and we wish to build upon this by creating groups of people connected by the love of creating their own fashion and the building of a strong following for Burda Style Arabia is the first important step towards this.”Dr Burda is the youngest of three sons of Aenne Burda, who was famously told by her husband she would be good in business, so she proceeded to build an empire. Today Burda is not only a successful magazine, but also one of the largest and most diversified publishers in the world.Burda Style Arabia is the only Burda edition in the world published in more than two languages and is distributed in supermarkets, bookstores and other magazine outlets throughout the region. Takhayal Entertainment also plans to launch a Pharsi edition of Burda Style Arabia later in 2011.www.takhayal.comTakhayal Entertainment is the independent award winning film producer and the Arab World's Only Film, TV, Publishing & Digital Media Company. Launched in 2005 by Youssef Eel Deeb, the company has offices in Dubai and Cario and works with a distribution network in 14 countries of the region.Unit P12 Rimal, The Walk, Jumeirah Beach Residence, PO Box 487177, Dubai, UAE

12-17-2012 | Media & Telecommunications
Custard Communications
Deadmau5 on the House: London Square Transformed In an Epic Music Light Show
Nokia + Deadmau5 have smashed it once again to produce an ‘out of this world’ light and music spectacular. The pair promised to take fans to a whole new level to celebrate the launch of the new Nokia Lumia handsets- and they didn’t disappoint. The entire London square was on Wednesday night plunged into darkness as Deadmau5 produced an epic audio-visual extravaganza with technical wizardry. Thousands flocked to the capital
06-16-2011 | Business, Economy, Finances, B …
Custard Communications
Qatar’s Regency Travel & Tours offers Air Miles on all travel bookings
Regency Travel & Tours, Qatar’s leading travel agency, has partnered with Air Miles Middle East to offer its customers the chance to collect Air Miles every time they make a travel purchase. And any Air Miles members using their Air Miles card along with their HSBC Card will earn twice as many Air Miles every time they book with the award winning travel agent. Regency Travel & Tours CEO, Tareq Abdullatif Taha,
06-16-2011 | Sports
Custard Communications
Hope Racing submits Le Mans 24 Hours race data to UAE-based brokerage to become …
Where the big manufacturers may have battled it out at the Le Mans 24 Hours race last weekend, with Audi overcoming two crashes and holding off Peugeot to win, history of a different sort was made as Hope Racing became the first team to compete at this level of motorsport using a hybrid car. The technologically advanced car may have spun out of the competition only 13 hours into the elite
06-08-2011 | Business, Economy, Finances, B …
Custard Communications
‘Green Trading’ arrives in the Middle East AGT opens the region’s first ca …
Trading of the world’s fastest growing commodity is now available in the region for the first time, with London-based carbon trading organisation, Advanced Global Trading (AGT), launching operations to directly service the Middle East. AGT today opened its regional headquarters in Dubai, with its traders attempting to convince increasingly environmentally-conscious investors in the region to consider ethical alternatives and potentially benefit from strong returns in the process. As of April 2010,

06-14-2022 | Advertising, Media Consulting, …
The Business research company
Directory, Mailing List, And Other Publishers Global Market 2022 By Type, By App …
The global directory, mailing list, and other publishers market size is expected to grow from $31.96 billion in 2021 to $33.20 billion in 2022 at a compound annual growth rate (CAGR) of 3.9%. The growth is mainly due to the companies rearranging their operations and recovering from the COVID-19 impact, which had earlier led to restrictive containment measures involving social distancing, remote working, and the closure of commercial activities that
04-11-2022 | Advertising, Media Consulting, …
QY Research
Radiant Infrared Heaters Market Trends, Application Analysis, Regional Outlook, …
The QY Research released a latest market research report on the global and United States Radiant Infrared Heaters market, which is segmented by region (country), players, by Type and by Application. Players, stakeholders, and other participants in the global Radiant Infrared Heaters market will be able to gain the upper hand as they use the report as a powerful resource. The segmental analysis focuses on revenue and forecast by region (country), by
10-19-2021 | Fashion, Lifestyle, Trends
Jacinto & Lirio
Work From Home Accessories by Jacinto and Lirio
Soft Eco-friendly Resizable Laptop Case Wraps Customers will be able to carry their gadgets, documents and tablets in soft, versatile cases that pay homage to Filipino craftsmanship. The Burda Laptop Case is a resizable wrap that comes in bold colors and is accented with embroidered water hyacinth. (Buy it here: https://www.amazon.com/Jacinto-Lirio-Resizable-Laptop-Envelope/dp/B0951R6LCK?ref=hnd_adp_ap_27 ) Vegan Leather Vision Board/Organizer Students/professionals need a visual system that will keep important tasks and dates organized. J&L made a desk planner
09-06-2012 | Media & Telecommunications
Turkcell Europe GmbH
Turkcell Europe Cup kicks-off in Germany
Leading mobile company launches nationwide football tournament in Germany to promote intercultural dialogue, respect and fair play among youth. Cologne based mobile company Turkcell Europe has become the main sponsor of a new football tournament to be launched on August 25th, in cooperation with the German Olympic Sport Federation (DOSB) and the Burda Sports Group. The “Turkcell Europe Cup” will be the first nationwide project sponsored by a private company
11-16-2011 | Media & Telecommunications
The Nunatak Group GmbH
“We are only at the beginning of the digital transformation”
- The Nunatak Group, a strategic consultancy, founded in Munich - Focus areas are digital strategy, mobile/social media and investment support - Four founding partners with experience across the entire media industry Munich, November 15th, 2011 - The Nunatak Group, a Munich-headquartered strategic consulting group focused on digital industries, has successfully completed its market entry. Already, the management team has acquired several prominent clients based on the strength of numerous successfully completed projects
03-07-2011 | Energy & Environment
BURDA WORLDWIDE TECHNOLOGIES GmbH
BURDA SMART CONVINCING IN FORM AND FUNCTION
As of now the well-proven BURDA SMART products IP24 and BURDA SMART2000 are available new in black colour. The obvious advantages: first-class efficient heating performance in a compact and shapely design. A powerful beautiful heater perfectly dedicated for the outdoor usage at the patio or balcony. The persuasive infrared-shortwave technology provides you with clean CO2 free instant heating without pre-heating, which always guarantees the perfect heat capacity. Exactly convincing in
Comments about openPR
OpenPR is clearly structured and remains true to its principle of confining itself to the essential parts. OpenPR has proven to be a very good and reliable partner to our media agency: Within the shortest time the releases are online and go down well with the media representatives. The success of OpenPR is reflected in the steadily increasing number of press releases. It is good that OpenPR exists!
Ursula Koslik, Director Marketing & PR, F+W Hamburg