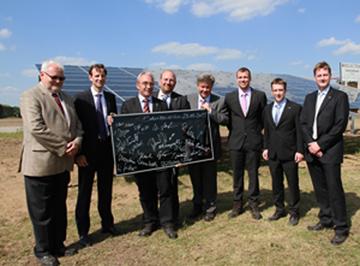 start of construction in Alt-Daber

Wittstock: With the turning of the first sod on 25 May in Alt Daber near Wittstock, the starting signal for the largest thin-film solar power plant in Germany was given. The 133 hectare plant of BELECTRIC Solarkraftwerke GmbH, the international market leader in Engineering, Procurement and Construction (EPC) of ground-mounted solar power plants 2010, is being constructed on the former Russian army grounds. "Wittstock and the entire state of Brandenburg have recognised the sign of the times." Martin Zembsch, CFO of BELECTRIC Solarkraftwerke GmbH, highlighted the positive collaboration with the responsible parties in the town with 15,000 inhabitants in north-west Brandenburg. According to Mr Zembsch, the town relies consistently on regenerative energy. After completion of the solar power plant, more than 71,400,000 kilowatt hours of electricity a year will be fed into the grid from the sun. This corresponds to annual CO2 savings of over 50,000 tons. "We shouldn't forget that we are at the start of a great development. What we achieve in small, laborious steps drives renewable energy and the energy revolution forward every day. It's a true success story. It doesn't happen overnight, but instead through the hard work of all those people who see the future ahead of them and want to make a change," emphasises Stephan Hansen, managing director of First Solar. The work in Alt Daber is scheduled for completion in December 2011 at the latest. In total, over 850,000 modules from the manufacturer First Solar will be installed on the former military grounds. The investment will not only secure the energy supply of approximately 18,000 households, but also the jobs of over 600 employees in the Frankfurt (Oder) region. "The co-operation with the local council and authorities could not have been better," says a pleased Martin Zembsch – a view that Jörg Gehrmann, mayor of Wittstock, could only confirm. He also emphasised the constructive co-operation with the BELECTRIC engineers and the responsible parties, which ensured that the planning phase ran smoothly. Ground was broken just four months after the town of Wittstock signed the contract with BELECTRIC Solarkraftwerke GmbH. "Everyone involved worked very efficiently," commented Martin Zembsch. Prior to the project, BELECTRIC invested a sum in the low one-digit million range in complex substrate checks, the removal of warfare material and contaminated soils and in the demolition of obsolete buildings. This constituted a significant ecological improvement to the 133-hectare site. Safety and scheduled contract completion were always the top priority and now the renaturalisation and simultaneous commercial use of the conversion real estate can begin. The protected premises offer rare species of animal and plants a new habitat.BELECTRIC is world market leader in planning and realizing ground-mounted solar power plants and roof-mounted systems. Engineers and project developers from BELECTRIC are searching interdisciplinary in each sector of solar energy to develop innovative technologies, as a foundation for an eco-friendly electrical power supply in the future. In contrast to the most competitors, the company offers photovoltaic solutions from one source. From planning to construction and operation and service, the pv systems are realized without subcontractors. For its system components BELECTRIC relies on own manufacturing capabilities.BELECTRIC Solarkraftwerke GmbH Press & Public Relations Wadenbrunner Str. 10 D-97509 Kolitzheim Tel.: 09385 9804 -5710, Fax: 09385 9804 -59710 E-mail: pr@belectric.com Web: www.belectric.com

07-14-2017 | Leisure, Entertainment, Miscel …
Music Promotion Club
Solar Kama Sutra – The Hotspot for Groovy Alt Rock Beats
Alternative rock music started to gain attention since 1980s and today it is one of the most popular genres in the music arena. The term “alternative” does not necessarily mean any genre of music and is an umbrella term referring to various music styles and form differing from mainstream. Alternative rock however is a kind of rock music performed by independent artist and bands that are typically not signed with
04-24-2015 | Energy & Environment
Aeon Lighting Technology Inc.
ALT introduces Suspended Fixture with Contemporary Design
(2015.4.24 – Taipei) Taiwanese high power LED manufacturer Aeon Lighting Technology (ALT) introduces a suspended LED T8 fixture that exhibits of slim and simple elegance, along with an impeccable internal LED heat-dissipation design optimized for illumination and its output consistency. This type of suspended fixture uses silver anodized aluminum exterior, giving it a smooth surface and an appealing color design. The fixture is also equipped with light diffusing panels, providing an
10-10-2014 | Energy & Environment
Aeon Lighting Technology Inc.
ALT Coastal Cleanup Day
(October 9, 2014 – Taipei) ALT (Aeon Lighting Technology) employees with friends and family participated, on October 4, in a beach clean-up organized by and between North Coast with Guanyinshan National Scenic Area and ALT. ALT staff and family members spent a joyous afternoon cleaning up the Laomei Green Reef Beach in the northeastern coast of Taiwan. The result was positive: over 200 kilos of waste and garbage were collected.
09-17-2014 | Energy & Environment
Aeon Lighting Technology Inc.
ALT Takes up Ice Bucket Challenge
(September 15, 2014 – Taipei) Ice bucket challenge? Not a problem for ALT!! Before the “Ice Bucket Challenge” craze, ALT products have already been known to feature products that work in the harshest environments. Remember the PAR38 lamp cooking in boiling water? This time, the challenge is for the lamp to work and operate in ice cold water. Please see video for the ultimate ice lamp challenge here: http://youtu.be/gcUlzIg2R30 The standard
09-05-2014 | Energy & Environment
Aeon Lighting Technology Inc.
ALT Partners with Realty Developer for Quality Lighting & Living
(Sept. 3, 2014 – Taipei) Other than work, the home is where most people spend most of their time. It is a place of comfort and relief, where people go back to relax and spend quality time with their loved ones. Which is why safety and the quality of materials used in building your home is so important. Lighting is something people generally overlook, but is nevertheless one of the
05-17-2011 | Business, Economy, Finances, B …
Aeon Lighting Technology Inc.
ALT Asteria MR16 Wins 2011 Red Dot Product Design Award
The Taiwan leading high power LED lighting manufacturer Aeon Lighting Technology (ALT) proudly announced to win 2011 Red Dot Product Design Award by Asteria MR16. After winning M Technology and iF Design Award, ALT, once again, is recognized by international design institution through excellent quality and stability design. Outstanding from more than 60 countries and 4000 competitors, ALT has become the first LED lighting manufacturer in Asia to acquire top
Comments about openPR
We publish our press releases on openPR.de because we like people who are "open" - just like us.
Frank Obels, CEO, INCONET - Informationssysteme, Communication und Netzwerkberatung GmbH