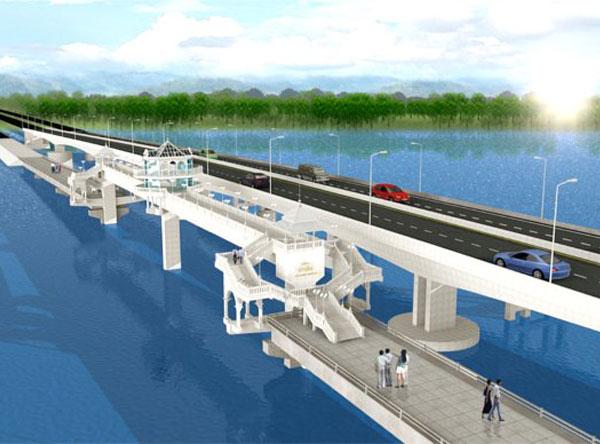 Phuket, Thailand: The Phuket Provincial Highways Office has announced that the new bridge linking Phuket to the Thai mainland will open this week as planned.Approved on October 28th 2009 with a budget of 378 million baht (US$12.5 million), the 655 metre structure was dubbed ‘Sarasin Bridge 2’ during its construction phase. It has since been officially named Srisoonthorn Bridge.The new bridge will be used by traffic heading north from Phuket to Phang Nga. Southbound traffic will continue to use the existing forty one year old Sarasin Bridge.More than 500 metres of additional roadwork were needed to redirect the flow of northbound traffic away from the Sarasin Bridge.“The new bridge is about ninety four per cent complete and the construction contract ends on June 20th,” commented Arun Sanae, Director of the Phuket Provincial Highways Office.The new Srisoonthorn Bridge and the Sarasin Bridge and are the only way on or off Phuket Island by car.The Sarasin Bridge was built in 1970 to connect Phuket Island to mainland Thailand.Since its construction the Sarasin Bridge has become notorious as a ‘lovers leap’, due to one particular love affair.In 1973 a local bus driver called Dam met a college student called Gew. Gew regularly caught Dam’s bus to and from college and they became friends.Dam came from a poor family. Whereas Gew’s parents were wealthy and had plans for her to qualify as a school teacher and marry a wealthy man.But Dam and Gew fell in love. Gew pleaded with her father to let them be together. He refused.On February 22nd 1973 the young couple drove to the Sarasin Bridge. They tied themselves together with a Thai loin cloth, attached a large rock to it and jumped to their deaths.A film was made in 1987 based on Dam and Gew’s ill-fated love affair. The title translates as simply; ‘Sarasin, the Bridge of Love’.Many couples have followed Dam and Gew’s example by choosing the Sarasin Bridge as their place to end it all.And who knows; lovers may already be queuing up to be the first to claim the new Srisoonthorn Bridge as their own, by being the first over the edge?Rebecca Smith Phuket Ocean Villas - http://www.phuketoceanvillas.comArticle source... http://blog.phuketoceanvillas.com/new-bridge-linking-phuket-to-mainland-thailand-opens-this-week/Rebecca Smith is a real estate journalist with more than 15 years experience. She is currently the sales director for Phuket Ocean Villas (http://www.phuketoceanvillas.com) who specialise in luxury ocean view property in Phuket, Thailand.Phuket Ocean Villas Co. Ltd. 149/12 Srisoonthorn Road, Cherngtalay, Thalang, 83110, Phuket, ThailandTel: +66 76 527 565 Fax: +66 76 527 564