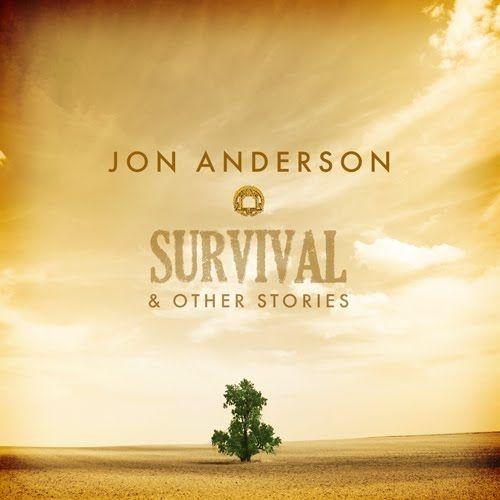 Asheville, NC - One of the most recognizable voices in music, the legendary Jon Anderson, best known for his work with Yes, Vangelis, Kitaro and other notable music artists, as well as his innovative solo efforts, is preparing to release one of the most highly anticipated albums of the year, 'Survival & Other Stories'. Featuring eleven new luminous songs with themes about love, life, understanding, healing and survival, Jon's new CD has an inspirational message for all who will listen!“About four years ago I just put in an ad on my website: 'Musicians Wanted'... This is the result. Writing the songs for 'Survival & Other Stories' was uplifting for me on many levels, I was working with musicians from around the world Via the Internet, it's a new world, music is a healing energy, I had a tough 2008, through illness, and the Music I've been writing since is a celebration of life on many levels...I hope you get the chance to hear the album..Big Love..Jon." 'Survival & Other Stories' is the first of three albums to be released by Jon Anderson in the next two years. Jon recently completed a successful east coast tour of the US, “An Acoustic Evening With Jon Anderson”, which featured and exciting mixture of material from Jon Anderson's prolific solo career, collaborations with Vangelis and classic YES songs, along with new compositions from his new CD 'Survival & Other Stories'. Jon will be performing select shows throughout this summer in the US and Canada. For tour dates visit www.jonanderson.com/tour.htmlJon Anderson 'Survival & Other Stories' available soon through Voiceprint Records www.voiceprint.co.uk, www.gonzomultimedia.co.uk www.jonanderson.com, www.facebook.com/thejonanderson, www.olias-jewelry.comPress Inquiries: Glass Onyon PR, Billy James, PH: 828-350-8158. glassonyonpr@cs.comGlass Onyon PR is a full-line entertainment publicity company.William James P.O. Box 18254 Asheville, NC 28814

09-06-2017 | Leisure, Entertainment, Miscel …
Music Promotion Club
"DITC Thick Remix" by Jon Rawls is witnessing greatness on Soundcloud
Earlier hip hop and rap was an aggressively engineered, recorded, and performed music genre. But now, it is smoothly produced and created by several artists across the world. However, there are some that still use aggression and profanity, but it is lesser now. Even the subtlest songs have some elements of extremely compressed screams. However, to witness a completely different style of hip hop and rap, fans must listen to
09-16-2013 | Fashion, Lifestyle, Trends
GOGO Music
Ralf GUM feat. Jon Pierce & Kafele – Never – GOGO 059
GOGO Music keeps at it with this stunning and real heartfelt song titled ‘Never’, which gave Ralf GUM’s album ‘Never Leaves You’ its name. Featuring Chicagoan crooner Jon Pierce and Kafele on trumpet and background vocals, the song received much praise since the long-player was released. Finally it receives its single release with remixes by no one less than the legendary Louie Vega. Ralf GUM is arguably one of the
12-20-2011 | Health & Medicine
AKW
AKW Announce partnership with Paralympic athlete Jon-Allan Butterworth
AKW, the market leader in daily living and showering solutions for independent living, has announced an exciting sponsorship of Paracycling athlete Jon-Allan Butterworth during his Paralympic campaign. Over the next 12 months the talented athlete will be working with AKW to spread its message of inclusive living, in addition to endorsing the importance of independence through new products and solutions. As part of the sponsorship, AKW will launch a local CSR
11-18-2011 | Arts & Culture
Light Space & Time Online Gallery
Jon Holiday Chosen for the Light Space & Time Artist Showcase
Jupiter, Florida - November 16, 2011 -- Light Space & Time Online Art Gallery announced today that Jon Holiday was chosen for the Gallery’s Artist Showcase. For the last 26 years, Jon Holiday has been the owner and operator of Image One Media in Fort Worth, who specializes in photography, video production, and audio-visual presentations. Jon has been taking pictures since he fell in love with photography when at
11-09-2011 | Health & Medicine
Global Medical Imaging
Global Medical Imaging appoints Jon Perry as Chief Executive Officer
The Board of Directors of Global Medical Imaging (GMI) announced the appointment of Jon Perry as the new Chief Executive Officer effective November 1, 2011. Perry began his career with General Electric. During his twelve-year tenure, he served initially in the Manufacturing Management Program and later as a manager in both Medical Systems and Industrial Systems. Perry also held leadership positions in sales, operations, and services at Okuma America
09-30-2010 | Sports
Sanderson & Associates
Extra Innings Scores a Home-run with Jon Cahill
(Middleton, Mass.) --- Extra Innings, the nation’s premier indoor baseball and softball training facility, is proud to announce Jon Cahill as Director of Baseball Operations for their Middleton, Mass. facility. Hailing from nearby Peabody, Mass., Cahill brings significant experience from college and minor league baseball to Extra Innings. Cahill played four years of college ball at the University of Massachusetts – Lowell, and was later signed by the Anaheim Angels
Comments about openPR
Your portal is fast, simple, and easy to use. Others may have more functions but they also demand more editing time, you have to preformat the text in order to achieve a good result etc. I think openPR is really fantastic!
Andreas Knepper, wallmedien AG