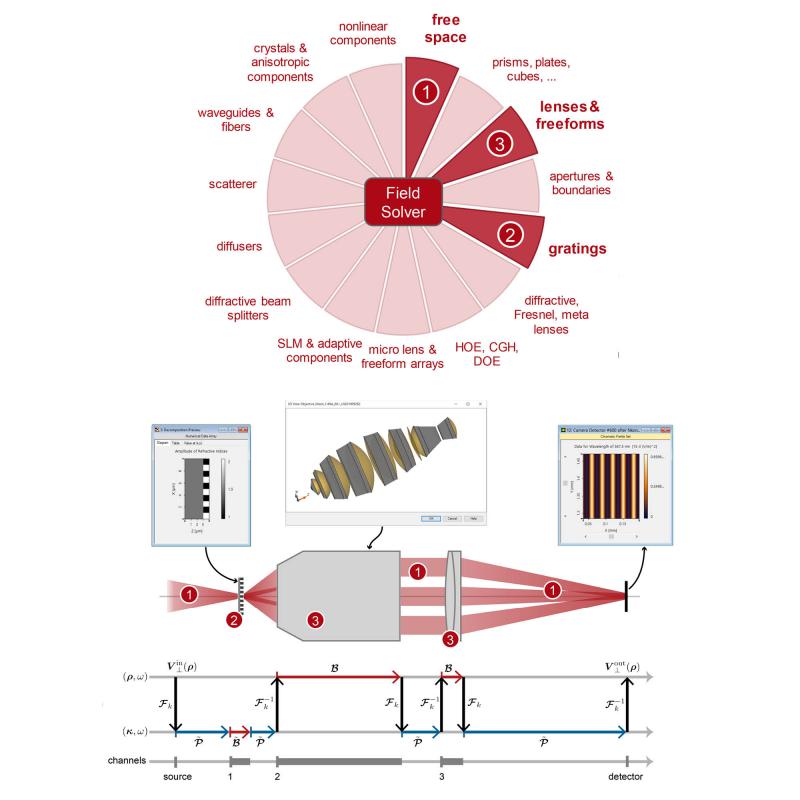 VirtualLab Fusion release with plenty exciting new physical-optics featuresJena, Germany | June 2019 The German software producer LightTrans International will present the new summer release 2019 of its Fast Physical Optics software VirtualLab Fusion at LASER World of Photonics 2019 in hall B1 at booth 209. The update provides new and improved solutions in applications like lightguide modeling and design for AR & VR glasses; diffractive- and metalens modeling and design; modeling of lens systems including gratings and microstructures; as well as for numerous other fields of application like microscopy, fiber coupling, and interferometry. Additionally, all the benefits listed above are now also accessible via customized external code, e.g. Python, with VirtualLab Fusion generating the physical-optics results in the background. Augmented & Virtual Reality Augmented- and mixed-reality glasses based on lightguide technology are currently of great interest, not least because of the pioneering work done by Microsoft™ and its HoloLens project. “LightTrans presents, with its VirtualLab AR & VR Solutions Package, the only commercially available solution on one platform which provides a fast and accurate physical-optics modeling of AR & VR lightguides including all relevant effects like diffraction, polarization, interference, and coherence,” explains Frank Wyrowski, president of LightTrans. In addition, with its new release, the company includes an amazing design technology, which provides experts with a fast way to obtain designs for further investigation, and all companies, even those without a team of top experts in grating theory and lightguide technology, solid access to this fascinating AR & VR glass technology.Gratings The inclusion of gratings in lens systems is not only of concern for AR & VR but for many more applications. VirtualLab Fusion comes with new grating components which can be included in any lens system while at the same time being modeled by electromagnetic methods.Diffractive lenses Diffractive lenses enable flat compact optics but require sophisticated modeling and design technology in order to judge their applicability as part of an optical system. This newest version of VirtualLab Fusion provides a fast electromagnetic modeling approach for diffractive lenses, together with lens structure design and fabrication data export. It also allows for the usage of binary surfaces from Zemax® OpticStudio®. Metalenses Metalenses seem to be a great candidate to go a step further in flat optics. Instead of using local gratings, as is the case with diffractive lenses, in metalenses nanostructures are used to control the local effects. VirtualLab Fusion adds an electromagnetic modeling and design technique to investigate the functionality of metalenses in optical systems.Diffractive Optical Elements (DOE) and Diffusers In its new version VirtualLab Fusion provides a new micro structured component which applies a more sophisticated modeling technique. It facilitates the simulation of micro structured surfaces, not only in the paraxial, but also in the non-paraxial, domain. This is of great importance for applications in illumination and sensors, e.g. for face recognition. While, traditionally, diffractive optics was introduced for paraxial, low-divergence scenarios, the increasing number of new applications for DOE’s and diffusers require the generalization of modeling and design techniques. Michael Höschel, General Manager of LightTrans emphasizes: “We are preparing the release of various new techniques in VirtualLab Fusion and new services for those applications in 2019. The first batch of new technologies will be presented at LASER World of Photonics 2019.”LightTrans International UG LightTrans offers solutions for the entire development cycle of optical components. Our products and services include optical design software, optical engineering, training and consulting. All the products and services of LightTrans are based on the physical-optics design software VirtualLab Fusion developed and produced by Wyrowski Photonics, which provides ray tracing and fast physical optics methods. More information at www.lighttrans.com/laserLightTrans International UG Irene Kopp Kahlaische Straße 4 07745 Jena, Germany Phone +49.3641.53129-54 Fax +49.3641.53129-01 Mail irene.kopp(at)lighttrans.com Website www.lighttrans.com

You can edit or delete your press release Software Solutions for AR & VR, Gratings, Diffractive and Metalenses, DOE’s here

08-31-2020 | IT, New Media & Software
LightTrans International UG
VirtualLab Fusion 2020.1: Fast Physical Optics, Brought to the Next Level
Latest release of physical-optics software VirtualLab Fusion opens the door to a wider range of applications. The strategy followed by LightTrans International in the development of the physical-optics design software VirtualLab Fusion can be summarized in two words: connecting solvers. The latest version, 2020.1, released this summer, brings this strategy to a whole new level. Connecting field solvers is the basis of fast physical optics: using a single solver for the
Comments about openPR
Your portal is fast, simple, and easy to use. Others may have more functions but they also demand more editing time, you have to preformat the text in order to achieve a good result etc. I think openPR is really fantastic!
Andreas Knepper, wallmedien AG