Board Members “Dumb” About IT 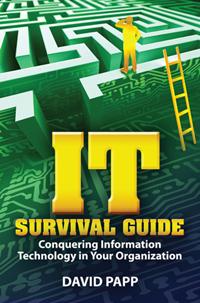 (Alberta, Canada)—According to a recent survey of over 200 board members by the National Association of Corporate Directors, 27 percent are believed to lack sufficient knowledge of information technology. Based on his years of experience as a professional IT consultant, David Papp, author of “IT Survival Guide: Conquering Information Technology in Your Organization,” is not shocked by this statistic. According to him, one of the largest weaknesses in business today is the lack of alignment between the boardroom and a company’s IT professionals. “Executives need to stop seeing their company’s IT system as a financial drain,” Mr. Papp suggests. “Instead, they need to see it for what it is: one of their company’s most valuable assets. The successful corporations of tomorrow will be the ones that realize this simple fact.” The same survey also revealed that nearly half of all board members were disappointed in their abilities to oversee their companies’ information technology performances. David believes at least five major reasons contribute to this problem, including: * Lack of information due to limited access of IT professionals to the boardroom * Lack of interest of some board members in information technology * Intimidation when dealing with technical data in general * Perception that IT systems are necessary evils offering no competitive advantage * Failure of IT managers to express IT needs to corporate executives “Board members must realize that the failure to align the company’s IT system with values, goals and missions results in a tremendous disadvantage compared to those companies that do,” David explains. “The companies of tomorrow won’t be ones that ignore their IT systems. They will be the ones that take advantage of their potential.”David Papp is an international IT consultant with over twenty years’ experience in IT systems. He is a popular keynote speaker on numerous IT topics. Mr. Papp has a computer engineering degree from the University of Alberta and holds multiple industry certifications.PFH Publishing Box 3642, Sherwood Park, Alberta T8H2T4, Canada PHONE: 780-951-4869 CONTACT: David Papp E-MAIL: media@davidpapp.com http://www.itsurvivalguidebook.com

01-12-2022 | Business, Economy, Finances, B …
Vestd
David Attenborough voted the UK's dream boss
A brand new YouGov poll has revealed who the nation would love, and loathe, to work for. Commissioned by Vestd, the UK’s leading share scheme platform, the data records the views of over 2,000 Brits surveyed in November 2021 and is weighted to be fully representative of all UK adults. You can find the full 2022 report here. Despite offering participants a smorgasbord of celebs including Daniel Craig, Gordon Ramsay, Rishi Sunak
03-25-2021 | Fashion, Lifestyle, Trends
TUUCI
DAVID SCHUTTE APPOINTED PRESIDENT OF TUUCI
MIAMI - March 24, 2021 - TUUCI, the Miami-based manufacturer of nautically inspired shade, shelter, and open-air furnishings, announces the addition of David Schutte as the organization’s new President. David’s tenure within the design industry and his well-refined leadership skills make him the ideal executive to fulfill the company’s worldwide strategic initiatives. “Since our humble beginnings inside a small boat shop in South Miami, TUUCI has been transforming the shade industry
06-01-2018 | Health & Medicine
LIVE Soda
LIVE Soda Welcomes David Ross as CEO
AUSTIN, Texas. (May 31, 2018) LIVE Soda, LLC, the Probiotic Soda Company, is excited to announce that David Ross has been named CEO. In his new role, Ross will be responsible for strategically leading the continued growth and innovation agenda for the brand and its expanding product lines. The newly-appointed LIVE® Soda CEO, who joined the company as COO in December of 2016, brings more than 10 years of management
12-20-2011 | Arts & Culture
Mira Sound Germany
Michel Montecrossa's Single 'Talking Selfish David From England' is dedicated to …
‘Talking Selfish David From England (Is It David Cameron?)‘, released by Mira Sound Germany on Audio Single and DVD, is Michel Montecrossa’s New-Topical-Song dedicated to PM David Cameron who has vetoed an EU-wide treaty change to tackle the eurozone crisis, making the mistake to separate and isolate England. Michel Montecrossa says: “Union is good for Europe and the world, Separation is bad. PM David Cameron has effectively vetoed an EU-wide treaty change
10-19-2011 | Arts & Culture
Halloween Party
David Banks Joins Halloween Party Cast
LOS ANGELES, CA (October 18, 2011) David Banks will join Elle Newlands, Chris Pentzell, Andrea Leithe, Danny Pardo, and Julia Silverman in the new film Halloween Party. At her best friend's urging, Erin, a single girl, attends her friends Halloween party-hoping as always, to find her perfect mate. But when she arrives, she discovers nearly everyone else there is part of a couple, OR she's already dated them. But the worst
06-25-2010 | Politics, Law & Society
Jackson Walker LLP
Jackson Walker Welcomes David Seidler
FORT WORTH – Jackson Walker is pleased to welcome partner David Seidler to the firm’s Fort Worth office. His practice focuses on commercial litigation, insurance defense, and alternate dispute resolution. Since 1992, Mr. Seidler has conducted more than 1,900 mediations of federal and state court cases involving every conceivable type of dispute. He is an immediate past Board Member of the Tarrant County Bar Association and a Founding Board Member and
Comments about openPR
Your portal is fast, simple, and easy to use. Others may have more functions but they also demand more editing time, you have to preformat the text in order to achieve a good result etc. I think openPR is really fantastic!
Andreas Knepper, wallmedien AG