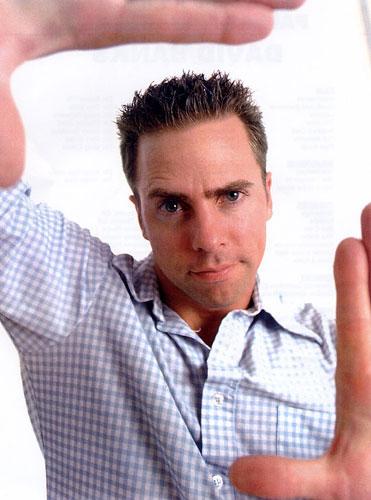 LOS ANGELES, CA (October 18, 2011) David Banks will join Elle Newlands, Chris Pentzell, Andrea Leithe, Danny Pardo, and Julia Silverman in the new film Halloween Party.At her best friend's urging, Erin, a single girl, attends her friends Halloween party-hoping as always, to find her perfect mate. But when she arrives, she discovers nearly everyone else there is part of a couple, OR she's already dated them. But the worst part? The host has invited her old boyfriend in hopes of reuniting them. As Erin spends the night avoiding her ex and the other undesirable guys in attendance, she interacts with a colorful assortment of party goers-each with their own issues. Producers on Halloween Party are Mark Cardone, Luis Lapeira, Linda Palmer, Florence Regina, Sandy Robinson , Karen Lee-Glance Smith About David Banks: David studied at the Groundlings, which claims some of the funniest comedians such as John Lovitz, Will Farrell, Chris Katan, and Lisa Kudrow to name a few.In his 10 year career he has amassed numerous credits in film and television. In addition to film and television, David can be seen on hundreds of commercials, such as Citibank, Motorola, Best buy, Mitsubishi, Red Robin, Little Caesars, Hoover, Milk, Samsung, Coors Light, and Reebok.David transformed himself by losing 20 pounds in preparation for doing the role of Chris in the movie Doing Hard Time, with Steven Bauer, Giancarlo Esposito and Boris Kodjoe. He did so by fasting for some 12 days.David thanks his father Tom Banks, the creator of "Heard It Through The Grapevine" Commercial with the dancing raisins. That influenced him at an early age. California Raisins...The concept was originally created for a 1987 commercial on behalf of the California Raisin Advisory Board when one of the writers (Thomas Banks of the advertising firm Foote, Cone & Belding) came up ...with an idea for the new raisin commercial, saying "We have tried everything but dancing raisins singing 'I Heard It Through the Grapevine'" (the 1968 Marvin Gaye song). To their surprise, the commercial became wildly popular, spawning future commercials, two TV specials (Meet the Raisins in 1988 and Raisins: Sold Out! in 1990), four studio albums, and a Saturday morning cartoon series, aptly titled The California Raisin Show.Aside from being an actor Banks is also a drummer for the band "The 3 Heads" He believes that playing the drums is not only the best way to satisfy the soul but its also the best way to vent with sticks. Playing with such talented artists gives him the freedom to express a style inspired by the wide variety and diversity of his influences.His band "The 3 Heads" have shared the stage with such artists as sara Bareilles, Five for Fighting, The Crash Kings, Dishwalla, Gary Jules, and DaDa.We focus on you - the client - (and why not?!) By focusing on the client, we attract more clients. And that’s been our successful model for ten years.Plastic PR 9903 Santa Monica Blvd Beverly Hills CA 90210Contact Dan Day 818 780 1940 PlasticEntertainment@hotmail.com

03-25-2021 | Fashion, Lifestyle, Trends
TUUCI
DAVID SCHUTTE APPOINTED PRESIDENT OF TUUCI
MIAMI - March 24, 2021 - TUUCI, the Miami-based manufacturer of nautically inspired shade, shelter, and open-air furnishings, announces the addition of David Schutte as the organization’s new President. David’s tenure within the design industry and his well-refined leadership skills make him the ideal executive to fulfill the company’s worldwide strategic initiatives. “Since our humble beginnings inside a small boat shop in South Miami, TUUCI has been transforming the shade industry
06-01-2018 | Health & Medicine
LIVE Soda
LIVE Soda Welcomes David Ross as CEO
AUSTIN, Texas. (May 31, 2018) LIVE Soda, LLC, the Probiotic Soda Company, is excited to announce that David Ross has been named CEO. In his new role, Ross will be responsible for strategically leading the continued growth and innovation agenda for the brand and its expanding product lines. The newly-appointed LIVE® Soda CEO, who joined the company as COO in December of 2016, brings more than 10 years of management
03-06-2014 | Arts & Culture
Adelphi University
ADELPHI UNIVERSITY PRESENTS DAVID HORNUNG: RECENT PAINTINGS
The Adelphi University Exhibitions Program presents David Hornung: Recent Paintings, featuring over a dozen oil paintings on panel in the Ruth S. Harley Univessity Center Gallery. The exhibition will be on view from February 26 through April 2, 2014, with a reception open to the public on Wednesday, March 5, from 5:00 to 7:00 p.m. Light refreshments will be served. Additionally, Hornung will host an artist’s talk on Tuesday, March
02-15-2011 | Industry, Real Estate & Constr …
Webarchives
David M Schwarz Architects Selects Webarchives iDAM™
Silver Spring, MD - WebArchives, a leading provider of Digital Asset Management (DAM) for the Architecture and Real Estate industries, announced today that David M. Schwarz Architects (DMSA) has selected iDAM™ as their core digital asset management system. David M. Schwarz Architects has a wealth of historical imagery and project documents that span over 30 years of work. Their goal is to capture this information and leverage the knowledge across
06-25-2010 | Politics, Law & Society
Jackson Walker LLP
Jackson Walker Welcomes David Seidler
FORT WORTH – Jackson Walker is pleased to welcome partner David Seidler to the firm’s Fort Worth office. His practice focuses on commercial litigation, insurance defense, and alternate dispute resolution. Since 1992, Mr. Seidler has conducted more than 1,900 mediations of federal and state court cases involving every conceivable type of dispute. He is an immediate past Board Member of the Tarrant County Bar Association and a Founding Board Member and
01-20-2010 | Advertising, Media Consulting, …
Crestron Electronics, Inc
Crestron Appoints David Sohn Creative Director
ROCKLEIGH, NJ – Crestron today announced the appointment of David Sohn as its new Creative Director. Sohn brings an in-depth understanding of brand management and graphic design, having worked for leading agencies such as Cheil Worldwide, McCann-Erickson Momentum and Grey Global Group G2. Sohn has created, managed, and marketed business-to-consumer and business-to-business brands, as well as implemented creative and art direction across multiple channels including print, promotions and online interactive
Comments about openPR
OpenPR is clearly structured and remains true to its principle of confining itself to the essential parts. OpenPR has proven to be a very good and reliable partner to our media agency: Within the shortest time the releases are online and go down well with the media representatives. The success of OpenPR is reflected in the steadily increasing number of press releases. It is good that OpenPR exists!
Ursula Koslik, Director Marketing & PR, F+W Hamburg