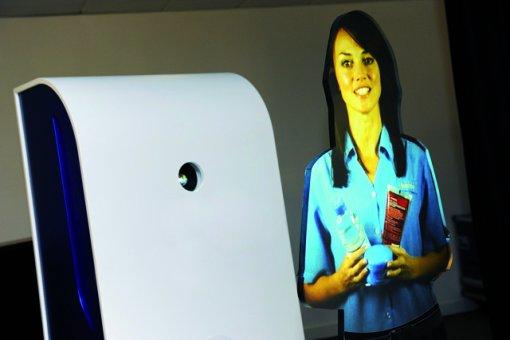 The innovative virtual mannequin, based on 3M Rear Projection Film, will be on show at Screenmedia expo 2011

Experience the wow factor of the innovative virtual mannequin at Screenmedia expo 2011Bracknell, UK, 17 May 2011 – Diversified technology company 3M and creative digital out-of-home (DOOH) specialist MediaZest today announced an installation milestone as the number of applications based on 3M Rear Projection Film exceeds 100. The two companies have jointly developed new and inspiring displays for in-store and public space advertising since 2006. With the advent of the virtual mannequin at BETT 2009 a whole world of creative possibilities has opened up for media agencies, brand managers and designers. Visitors to Screenmedia expo 2011 (18-19 May, Earls Court 2) will have the chance to see this novel concept in action as they pass through the entrance to the show floor. “Demand for digital screens to produce dynamic in-window advertising displays out-of-home is increasing in a wide variety of sectors and exceeding the 100th installation landmark is testament to this,” said Kim Brewer, Marketing Manager, 3M’s Commercial Graphics Division. “The revolutionary 3M Rear Projection Film, combined with a rear mounted projector, can transform any window, glass partition or acrylic cut out, of any shape or form into a digital screen. The film’s capabilities are truly impressive, combining a wide viewing angle with high contrast and colour resolution to deliver 24/7 performance.”Recent hype around virtual mannequins (aka virtual brand ambassadors or holographic assistants), at Luton airport demonstrates just how far the technology has advanced since its first UK appearance - heralded back then as the next interactive technology concept for attracting attention, increasing footfall and driving sales at the point-of-sale. In this application, a script was developed for the specific use of the mannequin and then an actor was filmed delivering it. Content was then edited to create a life-size acrylic cut out, which was projected onto 3M Rear Projection Film. The attention it generated was huge and indicates the coming of an era in which such products will be commonplace in the global airport and retail community.“3M and MediaZest have taken the technology forward together to give end users a really incredible wow factor product,” said Geoff Robertson, CEO of MediaZest. “The virtual mannequins can be used in so many ways to promote messages or reduce the need for staff intervention. We look forward to showing the concept to the digital place-based marketing, technology and emerging media sector at Screenmedia expo.”MediaZest will be exhibiting in the DOOH Media Lounge at Screenmedia expo. For more information, please visit www.mediazest.com or www.3M.co.uk/graphicsolutions. 3M is a trademark of 3M Company.About 3M 3M captures the spark of new ideas and transforms them into thousands of ingenious products. Its culture of creative collaboration inspires a never-ending stream of powerful technologies that make life better.The $27 billion diversified technology company has, since 1902, been creating innovative products that help make the world healthier, safer and more productive. Well known 3M brands include Scotch, Post-it, Scotchgard, Thinsulate and Scotch-Brite.3M employs some 80,000 people worldwide and has operations in more than 65 countries. The UK and Ireland is home to one of the largest 3M subsidiaries outside the USA, employing more than 3,500 people across 19 locations, including 10 manufacturing sites.Products manufactured in the UK include coated abrasives, occupational health and environmental safety equipment, adhesive tapes, industrial microbiology products, drug delivery systems, high-performance coatings, secure documents and passport scanners.Beky Cann Account Director Neesham Public Relations 7 Station Approach Wendover Aylesbury Bucks HP22 6BN Tel: +44 1296 628180 Email: bekyc@neesham.co.uk

05-03-2012 | IT, New Media & Software
Screen Events
Today’s Big Debating Points Voiced at Screenmedia expo 2012
“The store fights back” strategy workshop announced by The Imperative Group London, UK, 1 May 2012 – With Screenmedia expo 2012 just around the corner (16-17 May, London’s Earls Court 2), Screen Events Ltd today announced that the education programme is finalised and available for viewing at www.screenevents.co.uk/screenexpo2012. Brand new on the roster is a free-to-attend strategy workshop provided by the Imperative Group. Entitled “The store fights back – energising the
02-15-2012 | IT, New Media & Software
Screen Events
First wave of speakers announced at Screenmedia expo 2012
The Screen returns for digital bus tour to Westfield Stratford City and London Olympic Park London, UK, 14 February 2012 – The first round of confirmed speakers has been announced for Screenmedia expo 2012, taking place 16-17 May at Earls Court 2, London. Speakers will address informative issues that fall within the four key education programme channels – Connected Screenmedia, Connected Content, Interactive Connection and Smart Connections. Other event highlights include
10-07-2011 | IT, New Media & Software
Screenmedia expo
Education Programme Details Announced for Screenmedia expo 2012
Call for Papers now open, diary dates: 16-17 May 2012, Earls Court 2, London London, UK, 5 October 2011 – In such a fast-moving industry, where else would end users and marketers come together under one roof to understand what a connected offering is, how to use it and how to generate value from it? Without question, Screenmedia expo is the show for all screenmedia technologies and applications. On 16-17 May
05-12-2011 | IT, New Media & Software
Screen Events
Major debuts herald a momentous year for Screenmedia expo
London, UK, 12 May 2011 – Screenmedia expo (18-19 May, London’s Earls Court 2) is well esteemed in the European digital place-based marketing and emerging media sector and this year, more than ever before, has been acknowledged as the top spot for introducing new ideas, creativity and innovation. Participating companies, both exhibitors and speakers, have chosen the expo to present major technology launches, market debuts, big brand case studies
04-21-2011 | IT, New Media & Software
Screen Events
Connectivity, Content and Customer Engagement at Screenmedia expo
London, UK, 20 April 2011 – For two full days Screenmedia expo 2011 will be the hub of activity for the European place-based marketing and emerging media sector (18-19 May, London’s Earls Court 2). Over 4,000 visitors are expected to walk the floor, attend the free learning programmes, co-located conferences and after-show celebrations. Exhibitor numbers are also on track for a record year – the latest to sign up
04-04-2011 | IT, New Media & Software
Magenta Research
Magenta Exhibits Revolutionary AV Distribution Products at Screenmedia expo 2011
New Milford, CT, USA, and High Wycombe, UK, 4 April 2011 – Magenta Research, the recognised leader in AV signal distribution and switching, will exhibit its renowned MultiView family alongside its award-winning Voyager Fibre Optic Signal Distribution Platform and its HD-One Series products on Stand E19 at Screenmedia expo 2011, 18-19 May, London’s Earls Court 2. MultiView DVI: Magenta will demonstrate the latest addition to its MultiView family, known for best-in-class replication
Comments about openPR
OpenPR is clearly structured and remains true to its principle of confining itself to the essential parts. OpenPR has proven to be a very good and reliable partner to our media agency: Within the shortest time the releases are online and go down well with the media representatives. The success of OpenPR is reflected in the steadily increasing number of press releases. It is good that OpenPR exists!
Ursula Koslik, Director Marketing & PR, F+W Hamburg