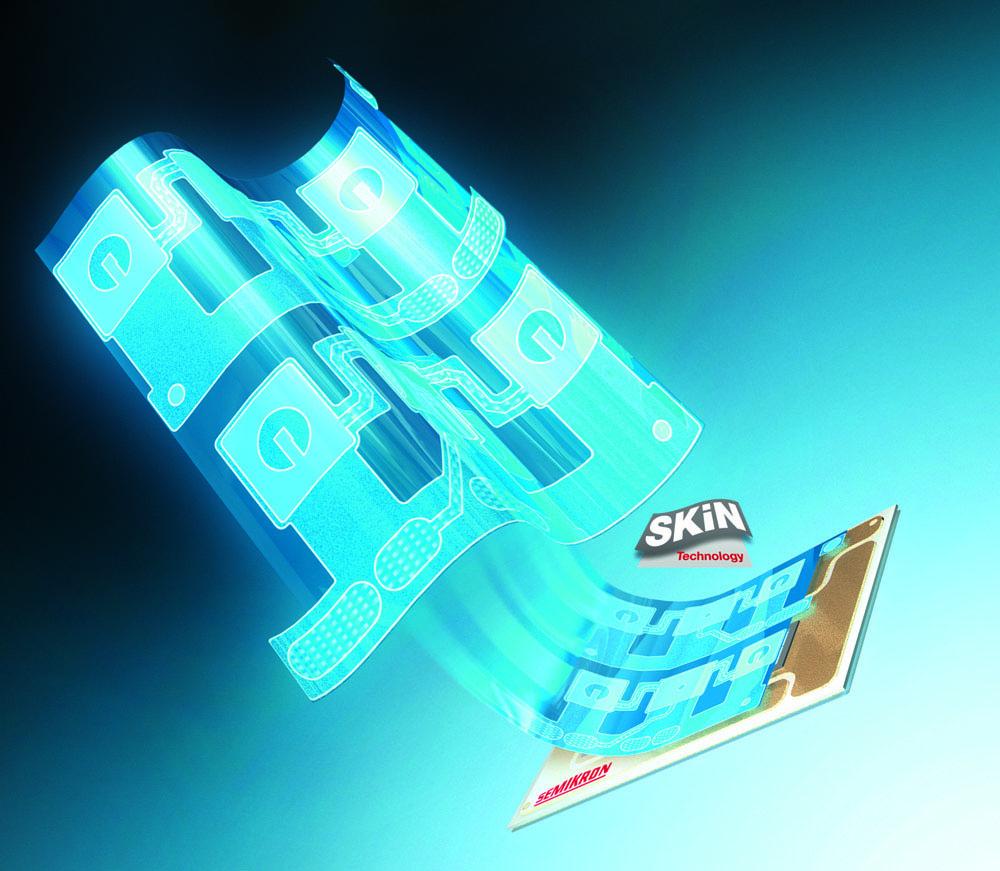 Nuremberg, 17 May 2011 - Semikron has developed a revolutionary packaging technology for power semiconductors which does away with bond wires, solders and thermal paste. The new SKiN Technology is based on the use of a flexible foil and sintered connections rather than bond wires, solders and thermal paste. The current density is doubled to 3 A/cm2 compared with 1.5 A/ cm2 achievable with standard wire bond technology. The converter volume can therefore be reduced by 35%. This reliable and space-saving technology is the optimum solution for vehicle and wind power applications.This results in a higher current carrying capacity and 10 times the load cycle capability – unthinkable with the restrictive wire bonding used in power electronics in the past. Wire bonding has been the main method of connecting the chip upper to a DBC substrate for the past 25 years. Wire bonding is not up to the higher current density that technical advances have brought about, meaning reliability is impaired. In the new packaging, a sintered foil now replaces the wire bonding on the chips, and the underside of the chip is sintered to the DBC. This results in optimum thermal and electrical chip connection, since sintered layers have a lower thermal resistance than solder equivalents. The sintered foil connects the chip across its entire surface, whereas bond wires connect the chips at the contact points only. Thanks to the high load cycle capability that this new packaging technology offers, higher operating temperatures are possible. Given the move towards new materials such as SiC and GaN, these elevated temperatures can then be fully exploited. But it’s not only the wire bonding that has been done away with in the new packaging solution. In fact, the new packaging is free of solder thermal paste. Instead, a sinter layer replaces the thermal paste layer and the soldered base plate. Thermal paste is responsible for around 30% of the total thermal resistance in a system. By replacing this, the thermal conductivity between chip and heat sink is improved, resulting in a 30% increase in usable electric current.With SKiN Technology is it now possible that a 3 MW wind power converter can be fit into a single switch cabinet. Another example is a 90 kW converter for hybrid and electric vehicles where this converter can be 35% smaller than the smallest converter on the market today. For converters in vehicles and wind power units, liquid-cooled systems are used, and the compact and lightweight converters used offer our customers an important competitive edge.Semikron is an internationally leading power semiconductor manufacturer. 2011 marks the 60th anniversary of the German-based family enterprise which employs 3600 people worldwide. A global network of 35 companies with production plants in Brazil, China, France, Germany, India, Italy, Korea, Slovakia, South Africa and USA guarantees fast and competent on-site customer care. Semikron is a one-stop provider of chips, discrete semiconductors, transistor, diode and thyristor power modules, power assemblies and systems for markets such as industrial drives, wind and solar, hybrid and electric vehicles, the rail industry and power supplies. Globally Semikron technology powers nearly every second windmill. According to a survey carried out by BTM Consult ApS, the total wind power capacity installed until 2009 was 122 Gigawatt. 57 Gigawatt comprises power semiconductors from Semikron. The dedication to the hybrid and electric vehicle market is evident in the development and production of power semiconductors for this market but also the majority take-over of Compact Dynamics GmbH, a development specialist for innovative control systems, the joint venture with drivetek, a provider for application-specific control technology, and the take-over of VePOINT, developing and producing inverters, DC/DC converters and chargers. Semikron is the market leader in the field of diode/thyristor semiconductor modules, enjoying a 30% share of the worldwide market. (Source: IMS Research „The global power semiconductor market 2010”)www.semikron.com.SEMIKRON INTERNATIONAL GmbH Annette Müller Manager International Communications Sigmund Street 200 90431 Nürnberg Tel: +49-(0) 911-6559-158/ Fax: +49-(0) 911-6559-77158 annette.mueller@semikron.com

09-10-2018 | IT, New Media & Software
Transparency Market Research
Skin Care Products Market
The global skin care products market demonstrates a highly competitive business landscape, states a new research report by Transparency Market Research (TMR). The leading vendors of skin care products are focused on maintaining their stronghold on this market through their diverse product portfolio, which they are continuously updating to cater to the specific demands of their customers. In addition to premium products, the emphasis on offering budget products has also
06-08-2017 | Health & Medicine
Orbis Research
Complicated Skin And Skin Structure Infections (cSSSI)-Pipeline Insights, 2017
Orbis Research delivers key insights on the global Complicated Skin And Skin Structure Infections (cSSSI) market in a new report titled “Complicated Skin And Skin Structure Infections (cSSSI)-Pipeline Insights, 2017” In this report, Orbis Research sheds light on the various factors and trends impacting market growth over the forecast period (2017 – 2022). “Complicated Skin And Skin Structure Infections (cSSSI)-Pipeline Insights, 2017”, report provides in depth insights on the pipeline drugs
03-09-2017 | Health & Medicine
MarketResearchReports.biz
Latest Report: Global Skin And Skin Structure Infections (SSSI) Market
Marketresearchreports.biz has added a new research report on the "Skin And Skin Structure Infections (SSSI)-API Insights, 2017" to its collection. The active pharmaceutical ingredients worldwide market is in continuous development from the recent years. There is expected to be a major impact on the global API industry, with the large number of blockbuster drugs going off patent in the coming years. It is going to affect the revenue of the API
11-07-2016 | Fashion, Lifestyle, Trends
LICLIS Co., Ltd.
Korean Skin Care LICLIS® Keeps Skin Looking Youthful and Healthy
What started as a company looking to combat aging effects has quickly grown to be a top choice in skincare products. In 1995, a small company was founded with the goal of finding a solution to premature hair loss. This company, known today as LICLIS, has evolved into one of the leading distributors of Korean beauty products.For over twenty years, the company has been dedicated to providing all natural, 100% genuine
07-19-2016 | Health & Medicine
MykoTroph AG - Institute for Nutritional and Fungal Medicine
Show your skin: Medicinal mushrooms can help against skin problems
Summer, sunshine and smiling faces. Whether in a nice café or on the beach: It’s about time for short dresses and skimpy outfits. A well-tended, naturally healthy skin makes us feel good. Though, a look in the mirror often shows the contrary: Our skin looks tired and pale. The golden rules for a nice and beautiful skin Your good summer mood must not be spoiled just because there are skin impurities,
03-31-2011 | Health & Medicine
Sunlight Research Forum (SRF)
Tanned skin is not a sign for skin damage
Spring has arrived and with it sunny days, enticing us outdoors and inviting us to sunbathe. Feeling uncertain as a result of advice, which mostly encourages them to avoid spending time outdoors, many people wonder: "Is a sun tan a sign of skin damage?” The answer, according to Ad Brand from the Sunlight Research Forum (SRF), is “No”, in fact the human body uses skin pigmentation in order to avoid
Comments about openPR
Your portal is fast, simple, and easy to use. Others may have more functions but they also demand more editing time, you have to preformat the text in order to achieve a good result etc. I think openPR is really fantastic!
Andreas Knepper, wallmedien AG