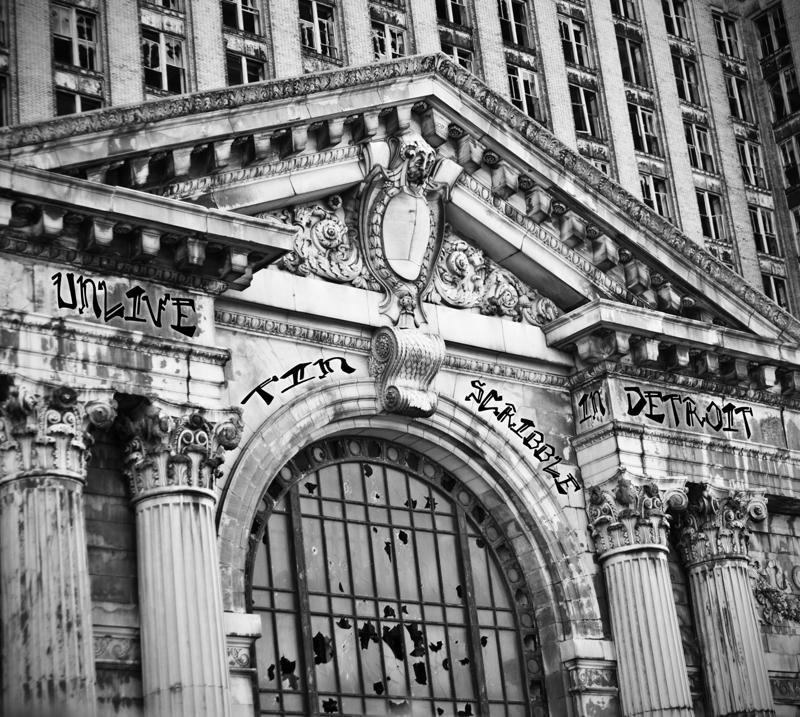 Detroit, MI - Out of the depths of the Detroit music scene arises one of the most innovative prog-rock group's to emerge on these Eastern shores in quite some time. Tin Scribble, who's debut CD release from 2005 'Children of Saturn' garnered critical acclaim on both sides of the Atlantic, is preparing to release a new live CD titled 'Un-Live In A Dead City' on June 1st. Much to the anticipation of the band's fans and music press worldwide, Tin Scribble's new live opus promises to deliver exciting virtuosic performances. "It's a mix of live recordings done in the studio, acoustic demos and some out takes in order to cover the musical transition between 'Children of Saturn' and the new studio album due out later this year," explains band leader Michael Moore, who sings, plays guitar and keyboards with the group. "I'm very excited about the new album, it will show how the new line-up has evolved. I'm struggling to improve my craft and expand my musical eclecticism." The new CD also features several new songs; three new full studio tracks, “Wake Live” with a string section, two acoustic pieces written for unreleased films and two classic Tin Scribble tracks, “Separate Silence” and “Bleak” re-recorded with new band personnel. Also, original band member Clinton Sabon, who worked with Tin Scribble on their first album, returns to help out on the three new tracks.Tin Scribble explores musical paths not travelled by many, but well worth the journey. With music reminscent of prog legends like Hawkwind, Gong, King Crimson and Van Der Graaf Generator, Tin Scribble is a force on the progressive rock front to be dealt with. In addition to Michael Moore, the band also features Ryan Looney (Drums), Danielle Colen (Bass) and Todd Richardson (Second Guitar). Along with the release of the new CD, Tin Scribble are fervently working on their follow-up studio album, tentatively titled 'The Most Unaccountable Of Machines'. The band hope to have the album completed for release late 2011.Tin Scribble arose from the ashes of Michigan art-rock troupe House of Usher, who released a well-received CD in the late 1990s called 'Body Of Mind'. Band members Michael Moore and bassist Mark Jardine decided to form a new group to take their musical vision a step further, thus the birth of Tin Scribble and the release of a successful slice of eclectic prog 'Children Of Saturn'. Some of the band's influences, such as Marillion, Tool, Dead Can Dance, Steve Vai and Led Zeppelin, can be felt throughout their debut CD. Here's what some of the music press have said about Tin Scribble:" 'Dark, tuneful, politically-conscious art rock' is how another reviewer (Joe Lisboa) described this debut album by the American band Tin Scribble, which is a very apt description to my opinion which I can't top, so I just borrowed that from him. 'Children Of Saturn' does indeed try to spread some conscious thought around the world about the 'insanity and ignorance around us' and it becomes pretty clear right at the start of the album that they are not very fond of the Bush administration (who is?). Some songs are a clear plea for independent and critical thinking and some others uncover the band's grievance about people's attitude towards each other and politics in the world. Michael Allen Moore who is the main writer of the band clearly has an urge for some world-improvement." - DPRP"...probably the most essential observation: most of the music has a fairytale feel to it and is amazingly imaginative. Conclusion, Tin Scribble's success is due not only to their technical prowess, but also (and in large part) to their good taste to know when delicacy is more important than energy and vice versa. Although different, their 'Children of Saturn' is every bit as good as 'Body of Mind' by House Of Usher."Along with recording the new studio album, Tin Scribble are ramping up to play some live gigs in support of the latest CD release. Tin Scribble's 'Un-Live In A Dead City' CD will be released independently on the group's private label, and will be available through CD Baby, Amazon, iTunes and the official band website www.tinscribble.comPress Inquiries: Glass Onyon PR, PH: 828-350-8158, glassonyonpr@cs.comGlass Onyon PR is a full-line music publicity company.William James P.O. Box 18254 Asheville, NC 28814